LeBron James proved again Sunday that he is the league's best player, and his impact went far beyond the numbers. We take a look at his stifling defense on Carmelo Anthony in the second half of Miami's 99-93 win.

LeBron James is, by far, the best player in the NBA in 2013. This is not news. In Sunday's 99-93 win over the New York Knicks, James brought the Heat back from a double-digit deficit by playing a complete all-around game. He tallied 29 points, 11 rebounds, seven assists and three steals. He scored when needed, took a backseat to keep others involved when appropriate, ran the floor, helped his teammates defensively and much more.

Most importantly, though, he shut down Carmelo Anthony.

Anthony torched the Heat in the first half, scoring 24 points on just eight shots while being guarded by Udonis Haslem. In the second half, James switched onto Anthony and held him to just eight points the rest of the way. Two of those points came in transition, and four came when Shane Battier guarded Anthony on a switch. The other two points came on free throws. Essentially: Anthony barely scored when James guarded him in the second half.

It was a virtuoso defensive performance that harkened back to the era when Michael Jordan took matchups personally and wouldn't let his man even get the ball. In this era of team defense, you rarely see that kind of one-on-one style anymore, and indeed, James did have help. But there were also several possessions where James prevented Anthony from doing anything, both with superior isolation defense and great ball denial.

Here's an example of the former from early in the fourth quarter. Anthony has the ball in his pet spot on the right elbow, but James balances himself beautifully and forces Anthony into a travel. 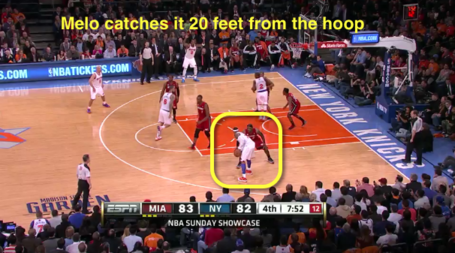 Anthony wants to get baseline, but as you can see, James cuts that off, forcing Anthony to spin back middle into the Heat's help. 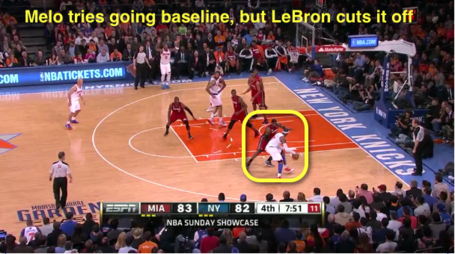 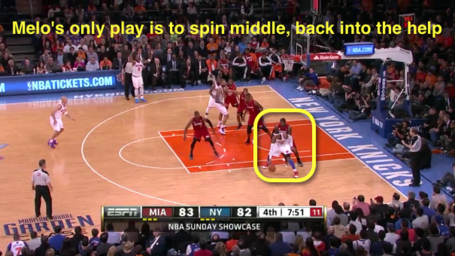 Melo does manage to get into the paint, but James also knows exactly what he's going to do. Knowing that Anthony often pump-fakes to get defenders out of position, James stays down.

Anthony tries again and does get James in the air, but because James cut off the initial play, Anthony is off-balanced and drags his pivot foot on the second pump fake.

Here's another example of James' isolation defense on Anthony from the third quarter. On this play, the Knicks try to get Anthony open by having him screen for Jason Kidd, then pop to the baseline. The purpose: force Anthony's man to account for Kidd, then find Anthony once he traps. At best, another defender is forced to switch onto Anthony. At worst, the pick-and-roll opens a passing lane for Anthony to catch the ball cleanly.

That's the plan, at least. But watch how James manages to trap Kidd and recover to prevent Anthony from catching the ball in his preferred spot. 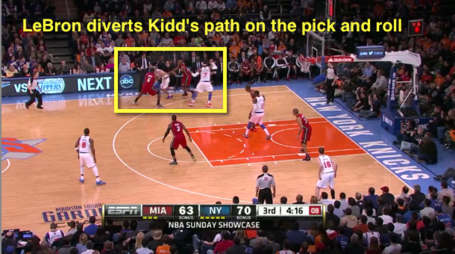 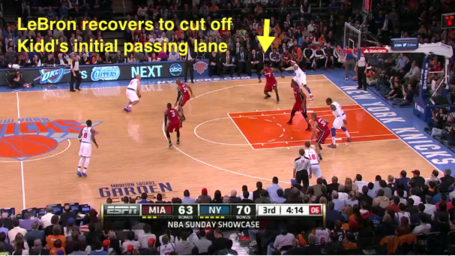 This ball denial slows down the entire play. Anthony eventually catches the ball 20 feet from the hoop and can only force a heavily-contested jumper with the shot clock running down. 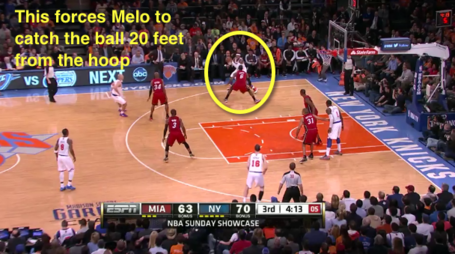 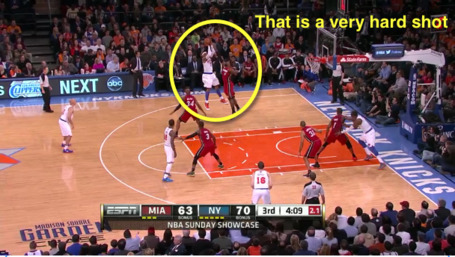 There were other plays where James didn't even let Anthony catch the ball. Two critical possessions in the fourth quarter stand out. The first came with just over five minutes left and the game tied. Miami had just come all the way back from a big deficit, and the Knicks needed to get the ball to Anthony to respond.

The Knicks run one of their pet plays, having Raymond Felton cross-screen for Anthony to get him open on the left block. This, in theory, allows the Knicks to pass Anthony the ball cleanly. Instead, James blows up the play by fighting over Felton's screen and beating Anthony to the spot. 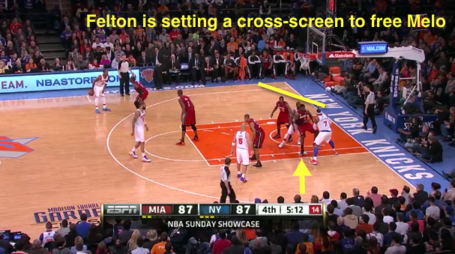 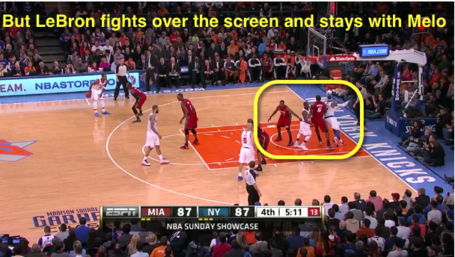 This is already enough to at least force Anthony to catch the ball further off the block, but James doesn't stop there. Notice how he still denies Anthony the ball all the way out to the three-point line. 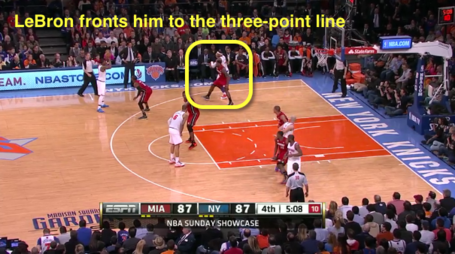 The Knicks are ultimately forced to scramble to create a shot, and while Smith eventually gets a decent three-point look, it's not the shot New York wants. 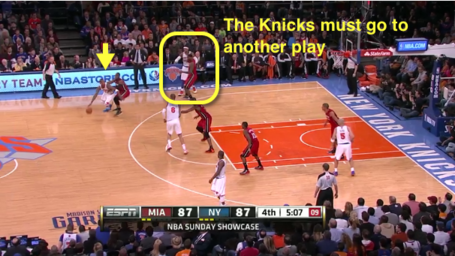 A couple minutes later, we saw James' ball denial skills at work again. On this play, the Knicks will screen Tyson Chandler to free him to set a pick on Anthony's man to get Anthony open on the left wing. This action, known as "screening the screener," is a common thing you see around the league because it forces defenders to pay attention to multiple actions, making it easier to get the ball to the guy you actually want open. 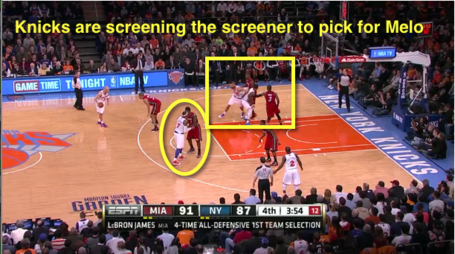 Once again, though, James fights over the top of the screen set on him and prevents Anthony from catching the ball. 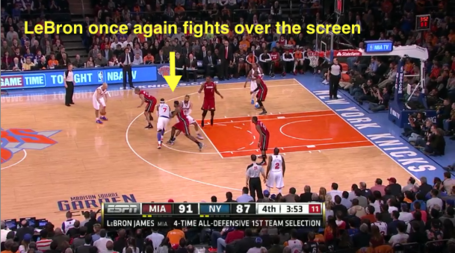 This ends up busting the next action of the play as well. After Chandler screens for Anthony, he's going to set a ball screen for Kidd going right. The idea here is to distract Anthony's defender just enough to open up a lane for Kidd to throw a crosscourt pass back to his left. James, though, notices this and positions himself perfectly. 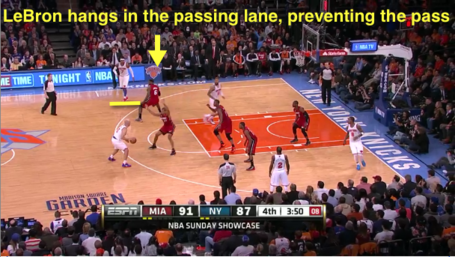 With that option closed off, Kidd tries dribbling back towards Anthony to hand him the ball, but even that doesn't work. 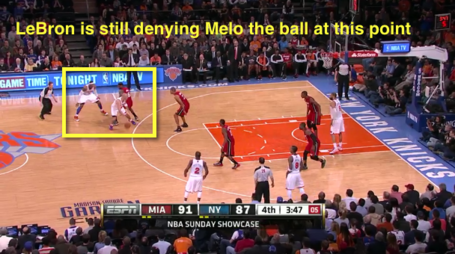 The only play left? A Kidd drive to the basket that predictably fails miserably because Kidd is 39. 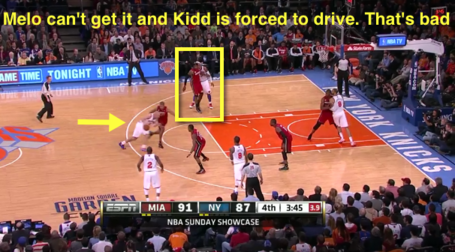 None of these plays will go down in the stat sheet for James, but they were instrumental in allowing the Heat to come up with a big win over a team they hadn't beaten yet this year. As amazing as it sounds, James continues to demonstrate that his value goes far beyond his gaudy numbers.