Louisville's Gorgui Dieng is one of the few real centers in college basketball. His emergence in the 2013 NCAA Tournament has dramatically improved his draft stock.

There aren't many NCAA centers with the physical ability to play the position in the NBA. At the next level, the paint is the domain of some of the biggest and most athletic human beings in the world. There are plenty of plodding and unathletic centers in college, but an NBA center has to be able to win wrestling matches with guys like Roy Hibbert, Omer Asik and Tyson Chandler on a nightly basis. Half of the guards in high-major conferences are NBA-caliber athletes; there are only a small handful of centers in the country who fit that description.

Gorgui Dieng, Louisville's junior center, is one of them. That's why scouts at a Basketball Without Borders camp in South Africa noticed him when he was a teenager, and it's why he would up at a prep school in West Virginia despite knowing virtually no English. Since he picked up the game later in life, he was still a relative neophyte when he came to Louisville three years ago.

This season, as he's started to put it all together on both ends of the floor, he has been steadily climbing draft boards. His stock will only keep rising after his dominant two-way performance in Louisville's 85-63 drubbing of Duke in the Elite Eight, where he had 14 points, 11 rebounds, four blocks and two steals on six-of-eight shooting. 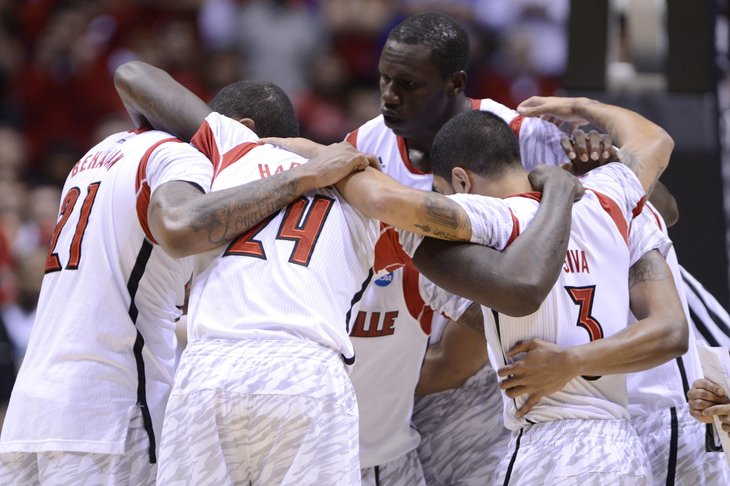 At 6'11 and 245 pounds with a 7'4 wingspan, Dieng has prototypical size for an NBA center. He's long and explosive enough to play above the rim, strong enough to hold his ground on the block and quick enough to move his feet and defend in space. Generally, even the best collegiate centers will be lacking in one of those categories. On Sunday, Dieng was matched up with the 6'10, 235-pound Mason Plumlee, a stringbean with a high center of gravity who lacks the raw strength to be a high-level starting center at the next level. In the Sweet 16, it was Oregon's Tony Woods, an explosive 6'11, 245-pound center without the fluidity or feel for the game to play in the NBA. In the Round of 32, it was Colorado State's Colton Iverson, a 6'10, 260-pound rebounding specialist who can't play above the rim.

Dieng, in contrast, is the backbone of a fearsome Louisville defense that blitzed through the Midwest Regional, winning by an average of more than 21 points a game. He functions as a goalie on the floor. His ability to lock down the paint allows the Cardinals to ballhawk and trap for all 94 feet. He's not quite the shot-blocking machine Nerlens Noel is, but 2.5 a game is nothing to sneeze at. He had four tone-setting blocks against the Blue Devils, swatting balls out of bounds and pinning them against the backboard. Duke's guards had little chance of scoring over the top of him, severely limiting their options when Russ Smith and Peyton Siva started pressing them.

And while defense will be his calling card at the next level, offense is where Dieng has really improved this season. Louisville blew the game open in the second half when they ran plays to get him the ball at the top of the key. Most centers are useless offensively outside of the paint, but the Cardinals were running him off screens to free him up for mid-range jumpers. Duke couldn't keep Siva and Smith out of the lane, so Plumlee had to make a Sophie's Choice between protecting the rim or leaving Dieng open. It's the same basic pick-your-poison dilemma that Chris Bosh presents defenses in Miami and Serge Ibaka does in Oklahoma City.

Dieng isn't as skilled as Bosh or as explosive as Ibaka, but a credible defensive center who can function as the release valve of an offense is still incredibly valuable. His field goal percentage (53 percent) is a little low for a big man, but he makes up for it with a 68 percent free-throw shooting percentage.

Shooting isn't the only part of his game that has improved under Rick Pitino's tutelage. After averaging 1.1 assists and 2.0 turnovers as a sophomore, he has improved as a passer this season, the rare center with a positive assist-to-turnover ratio. In the Cardinals' Big East Championship victory over Syracuse, he picked apart the Orange's 2-3 zone with eight assists.

Dieng will never be a primary offensive option at the next level, but he's going to be a very attractive option in the draft for any NBA team looking for a center, which is essentially all of them. At the age of 23, he may already be close to his ceiling, but his combination of size, skill and athleticism will keep him in the league for at least a decade regardless. He's a better version of Festus Ezeli, a rookie from Vanderbilt who has already giving the Warriors quality minutes as a backup 5. Most importantly, with NBA teams increasingly cost-conscious due to the new CBA, Dieng's rookie contract will be a much cheaper option at the position than anything they can find on the open market.

Even though Dieng is a junior, Pitino allowed him to participate in Senior Day festivities because there just isn't anything left for him to do at the college level. He's polished his game to the point where he's capable of contributing for an NBA team next season. Like all rookie big men, he'll have a steep learning curve at the next level, but he won't be physically outmatched. He's the rare seven-foot project who has actually developed into a legitimate basketball player, a testament to a work ethic that has helped make him a beloved figure among Cardinals fans.

At Louisville, he plays in front of crowds with more people than the population of his hometown of Kebemer, Senegal. There's no place on Earth obscure enough to hide scouts from a player like Dieng.