In Bulls' season of questions, Jimmy Butler answers the call

The playoff-bound Bulls have plenty of question marks, but second-year swingman Jimmy Butler is not one of them.

Share All sharing options for: In Bulls' season of questions, Jimmy Butler answers the call

TORONTO -- Jimmy Butler will do whatever you ask of him. Lately, the Chicago Bulls are asking a lot. He's played an average of 42.7 minutes in his last 12 games, starting at shooting guard or small forward depending on who else is available. He's jumped the opening tip and played backup power forward. Butler is one of just two Bulls, the other being Nate Robinson, to suit up in every game this season.

For a team forced to shuffle its lineup because of injuries to Joakim Noah (foot), Taj Gibson (knee), Luol Deng (hamstring, foot), Richard Hamilton (back), Marco Belinelli (abdominal strain) and Kirk Hinrich (foot, elbow, knee) in addition to being without Derrick Rose all season long, Butler's been a constant. He's trusted by head coach Tom Thibodeau because of his defense and he's shown off his growing game on the other end.

"He's an excellent offensive player," Thibodeau said. "The way he scores, he runs the floor, he moves without the ball, he's great to the offensive board, he has worked extremely hard on his three-point shot. He's a very good corner three-point shooter right now and we felt good about that from the start. He's always been an excellent free throw shooter so we thought that showed us that he would have the ability to improve his shooting and he's done that. He can play off of people, he's great feeding the post, he does a lot of things that help your team win."

"He's been able to step up in big games when we needed him to," Gibson said.

Last week, Butler scored a career-high 28 points on 10-for-12 shooting against the Toronto Raptors, playing all 48 minutes and grabbing seven rebounds while matched up against the Raptors' No. 1 option, Rudy Gay. Two nights later, he played 50 minutes in an overtime win against the New York Knicks. He had 22 points on 9-for-15 shooting, 14 rebounds, two assists, three steals and three blocks and guarded the league's scoring leader, Carmelo Anthony, for significant stretches.

"With this team, you never knows who's going to be hurt," Gibson said. "A lot of guys been banged up, so he's been stepping up, playing big minutes. You can tell by the way he's been playing, especially when we let Ronnie Brewer go, you knew his minutes were going to go up a lot more."

"You gotta earn every second when you play for a coach like Thibs." -Jimmy Butler

Going into the season, Butler didn't see it that way. Even with the offseason departure of Brewer, a versatile defender and a starter on last year's team, he didn't think an increased role was a sure thing.

"Nothing's given to you," Butler said. "You gotta earn every second when you play for a coach like Thibs and I feel like I've done that. I feel like I've been working, he's seen me putting in that work and it's showing."

As a rookie last year Butler put in work in practice but spent a lot of time bolted to the bench. He appeared in 42 of the Bulls' 66 games in the lockout-shortened regular season, playing just eight minutes per game.

Butler played one playoff minute when Chicago fell to Philadelphia in the first round. This weekend the Bulls will be back in the postseason and his role will be drastically different.

"It's huge," Thiobdeau said of Butler's development. "He's a team-first guy and he's made a great commitment to our team. He has steadily improved since he was drafted. Unfortunately for him, he came in, the first year was the lockout season, so he missed the summer and the fall, so he was learning on the fly most of last year."

It might seem like the No. 30 pick of the 2011 draft has come out of nowhere, but those around him aren't surprised.

"Everybody knew what his talent was but you gotta think about everybody who was playing ahead of him last year," said Toronto Raptors point guard John Lucas III, who played for Chicago last season. "From Kyle Korver, Rip Hamilton, Luol Deng, Ronnie Brewer. So it was just a pecking order. He knew he had to wait his turn, he wasn't frustrated, he came in and put his work in and it shows this year."

Butler averaged 17 minutes per game as a backup until Deng hurt his hamstring in mid-January. He then suddenly found himself in the starting lineup and playing 43-plus minutes for five-straight games. He's had ten 40-plus minute nights since and it rarely looks like he has tired legs. Butler is shooting 37.5 percent from behind the three-point line on the season, 48.1 percent in the last 22 games when his minutes have been the heaviest. It's particularly impressive considering he shot just 2-for-11 from behind the arc all of last season.

"I thought last summer he showed us how serious he was by being in the gym every day all summer long," Thibodeau said. "He didn't take a day off, just kept working and working and working. It wasn't anything that he said, it was what he was doing. And when you get that type of commitment, you're going to see improvement. He's got a great demeanor, great work ethic and those types of guys continue to improve and that's what he's done."

Thibodeau isn't the least bit surprised with what Butler has done. Asked if his perception of the swingman had changed, he offered a simple "no" before pausing for a few seconds and adding that he watched him a lot in college.

At Marquette, Butler's shot looked slightly different but his style was the same. He so much took pride in his defense that he put a picture of a game-winning shot made against him on the back of the door in his dorm room. He wanted a reminder that he couldn't let it happen again. It's this attitude that makes him a typical Thibodeau player. 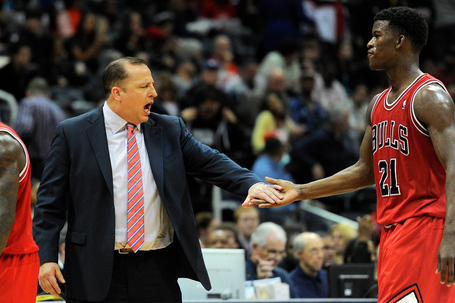 "I feel like we connect in more ways than one," said Butler. "Especially on the defensive end, that's what I pride myself on and just his winning mentality and how he always wants to win."

"It's not a coincidence that he's there," Lucas said, adding that he knows Butler likes the challenge of guarding the league's best.

"He just goes hard every possession," said Lucas. "Every possession, he goes hard. And he knows he's good. You gotta have a cocky attitude to play this game of basketball. You have to be very sure of yourself. And he's assured of himself. I talked to him over the game [last Friday] and he was talking all trash. I was like, alright, young fella. But when you put the work in and you go out there and you know what you're capable of doing, you don't worry about anything else."

Heading into the playoffs with an inconsistent offense, endless questions about the potential return of their superstar and numerous rotation players coming off of injuries, there are plenty of concerns for Thibodeau in Chicago. When it comes to the dependable Butler, there's nothing to worry about.

• CelticsBlog: We are Boston

• Sharp: Of course Kobe is coming back