NBA awards picks: Who should win the hardware this season?

Share All sharing options for: NBA awards picks: Who should win the hardware this season?

The end of the NBA regular season means the most important period of the year is upon us. No, not the playoffs. Award season! Over the next few weeks, David Stern will pop up all over the country to hand large chunks of metal and/or glass to the league's best. For now, we -- Paul Flannery, Mike Prada and I -- tell you who we think should get those commissioner visits.

If LeBron James doesn't win this award unanimously, there's something wrong with voters. Kevin Durant submitted one of the finest second-place finishes you'll ever see, but the choice is obvious. While James' team is talented, they aren't one of the most fearsome squads in NBA history without LeBron's superhuman production every night.

A stunning stat for you: James played in 76 games this season and shot below 50 percent 12 times. He shot below 45 percent -- subpar games for mere mortals -- seven times. He shot below 40 percent -- off nights for most stars -- four times. Overall, James shot 45 percent from the field ... in his 20 worst games. Only 11 other perimeter players in the entire league that played over 30 minutes a game with a usage rate of above 20 shot 45 percent from the field. And that's James at his worst.

Durant secures second place on this list after cracking the 50/40/90 plateau and scoring more points on fewer shots than teammate Russell Westbrook. Any other year, he'd win MVP.

I had Chris Paul in the third slot for most of the year, but Carmelo Anthony's late surge puts him ahead on my ballot. Anthony's scoring binges were essential in securing the second seed in the East for the Knicks after a midseason swoon, and his ability to function as a power forward allowed the Knicks to play their style. This is more about Anthony than Paul, who submitted yet another fantastic season in L.A.

The fifth spot on this ballot was a tough one. Tim Duncan, James Harden, Kobe Bryant and Russell Westbrook all make great cases, but I'm going with Dwyane Wade after the significant bounce-back season he had. James is the league's best player, but Wade is still really important to the Heat's success. That he submitted his best shooting year after many counted him out due to nagging injuries is impressive. I chose him over Bryant and Harden because Wade is at least capable of being a defensive asset, whereas Bryant and Harden gave poor effort and were non-entities on that end. -Prada

ROOKIE OF THE YEAR

Damian Lillard never played like a rookie. That's an exaggeration, of course, but from opening night when he dropped 23 and 11 on the Lakers to Game 78 when he scored 38 in a duel with Kobe Bryant, Lillard has operated like a 10-year vet.

Lillard's learning curve was accelerated by staying in college for four years in a system that was structured to maximize his talent. That it happened to be in the best interest of his school and his pro potential is an abject lesson for college coaches everywhere.

But there was a learning curve. No rookie came into the NBA with more responsibility than Lillard and his emergence seems to have finally solved the Blazers' long-standing long-standing point guard issue.

Anthony Davis averaged 13.5 and 8.2 rebounds in 64 games as a rookie while shooting better than 50 percent from the floor and 75 percent from the line. The most important number for Davis is really 19, as in his age. By the time his rookie contract will be up, he'll be just 22 years old. That's the same age as Lillard.

If the draft were held today, Davis would still go number one and Lillard might go behind the likes of Andre Drummond and Bradley Beal. But this year there is no doubt about who had the best season. Lillard not only averaged 19 points and six ssists while posting a solid .546 True Shooting percentage, he also played more than 3,000 minutes. -- Flannery

Why we aren't picking a Most Improved Player

Award mistakes can be tolerated. Every once in a while, a Steve Nash will win MVP or an Avery Johnson will win Coach of the Year. It happens. We survive.

But I'm not sure Most Improved Player has ever been awarded properly. The intent of the award -- to recognize a young player who had a surprisingly good year -- is noble. But its history -- it replaced a Comeback Player award that had been repeatedly granted to those who kicked a drug habit -- and its true nature -- recognition for a player we had previously thought was meg -- are dark.

Basically, there is no criteria for the award. So there are 100 or so legitimate cases every year depending on where you place your priority. That makes arguing about the award stupid ... especially considering voters just usually hand it to a player with a huge jump in minutes per game. So, what's the point? Kurt Thomas for Most Improved is what I say. -Ziller

SIXTH MAN OF THE YEAR

On Monday I wrote about what your Sixth Man pick says about you. Mind you, I hadn't determined who my Sixth Man would be: I had to visit the Old Man in the Cave off the Scottish coast on Tuesday to seek guidance for this oh-so-important task. He complimented me on my top 100 film list, so ...

In all seriousness, J.R. Smith or Jamal Crawford will win because this is an award that usually goes to the best bench scorer. But we all know full well that scoring isn't everything. We've stopped awarding MVP based on points per game, and someday we'll stop doing it with Rookie of the Year, too. (In fairness, usually the top scoring rookie is in reality a top if not the top candidate.) Why not Sixth Man, too? Amir Johnson isn't a prolific scorer, though he puts in enough points in addition to the multitude of other things he offers on the court. Yes, he plays for a horrid team. But he's the team's best defender, best big man ... heck, he might be the team's best player. And he comes off the bench for whatever reason. In a season without reward for Toronto, he deserves the award in my book.

Here are Amir's bench rankings: No. 2 in rebounding, No. 4 in blocks, No. 7 in steals, No. 10 in field goal percentage and No. 1 in win shares. No, he doesn't score like Smith or Crawford. And like most bench players who aren't Andre Miller or Jarrett Jack, his assists are low. But he does literally everything else. I'd rather have a stud bench player who can do many important things than a sixth man who does nothing but score. Amir! -Ziller

DEFENSIVE PLAYER OF THE YEAR

A month ago, I wrote about why Marc Gasol deserves this award. Since then, his primary competition, Joakim Noah, suffered a foot injury and has been limited since. The choice for me is easy.

Noah would have put up a heck of a fight if he could have stayed healthy. Chicago's defense fell of a bit this year, but they looked every bit the part of their previous units when Noah was on the floor. He does many of the things Gasol does on the backend and is also quick enough to step out on the perimeter if a switch happens.

The third spot could go to any number of candidates. Andre Iguodala significantly improved the Nuggets' perimeter defense, which was so spotty last year. Milwaukee's Larry Sanders emerged as the league's best shot-alterer and covered up many breakdowns by the Bucks' small guards. Roy Hibbert's offense took a while to come around, but his defense on the back line was as good as ever. But I'm going to instead credit Hibbert's teammate, Paul George, for taking on every key perimeter assignment and holding his own using his length and quickness. You could easily flip-flop George and Hibbert, but in this case, I'm taking the wing that consistently prevented his man from getting to Hibbert off the dribble. -Prada

COACH OF THE YEAR

This may be the toughest choice on the board. Gregg Popovich's record is exemplary and he oversaw the Spurs' defensive revival after years of slippage. George Karl was the mastermind behind the Nuggets frantic no-stars approach. Mike Woodson got the most out of J.R. Smith and an odd roster of ill-fitting parts by not conforming to conformity.

The vote here, however, is for Miami's Erik Spoelstra, who overhauled Miami's offense and brought out the best in LeBron James.

The toughest thing for a coach to do is tinkering with a successful formula. Spoelstra and the Heat could have coasted through the regular season and assumed that they could turn it on again in the playoffs. They didn't, and in the process they've become that much more formidable.

Miami's transformation wasn't a one-year development. It took time, patience and trust, but the payoff has been worth the wait. Beyond the histrionics and the smokeshow, the Heat are finally what we always wanted them to be in a basketball sense, and that's why Spo's the call in a very crowded field. -- Flannery

EXECUTIVE OF THE YEAR

Mitch Kupchak had the Executive of the Year version of Oscar bait. Welp! The Lakers GM was a shoo-in for this award until the season started. Injuries ravaged L.A., and there's still a chance the team could miss the playoffs. When you have the highest payroll in the league and don't clinch a postseason bid until the final day of the season if even then, you don't win hardware. 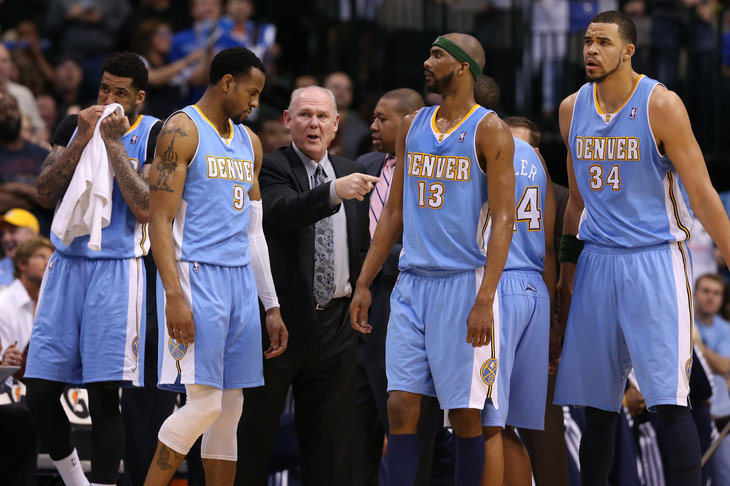 That really puts the award up for grabs. I'd be perfectly fine if the other 29 GMs decided to hand the award to Pat Riley every year until Dwyane Wade retires or LeBron James leaves. Hell, rename it the Pat Riley Executive of the Year award. (Actually, don't do that. Riley would probably turn it into a horcrux.) But in terms of moves made over the past year, I think Denver's Masai Ujiri has to be the choice. He's put together a roster that a) is awesome, b) fits the team's coach perfectly, c) fits the team's innate advantage -- altitude -- perfectly, and d) is flexible. The only player on the Nuggets you can call overpaid is JaVale McGee, but the remarkably cheap deal JaVale's platoon-mate (Kosta Koufos) is on evens it out. And getting Ty Lawson for well below the second-contract max was brilliant.

In addition to Ujiri, the work of Daryl Morey in Houston needs to be recognized. He finally got his superstar. The cold water on his candidacy is that the team's actually not much improved in terms of performance over previous versions. But it's much younger and has the potential to reach higher levels in coming years.

The front office hydra in Golden State deserves credit for filling in the holes around Stephen Curry and David Lee, and if I knew the name of the GM for the Clippers I'd give him a nod, too. As for the Knicks, I'm just impressed that none of Glen Grunwald's signings died of natural causes this season. Yet. -Ziller

• CelticsBlog: We are Boston

• Sharp: Of course Kobe is coming back