The Chicago Bulls: Battered, dangerous and ready for a playoff surprise

It's been a long season for Tom Thibodeau's Chicago Bulls, especially without star Derrick Rose, but a look inside their locker room before and after their final regular-season game shows they won't go down without a fight.

Share All sharing options for: The Chicago Bulls: Battered, dangerous and ready for a playoff surprise

CHICAGO -- You can see 82 games on Tom Thibodeau's face. As he addressed the media before the team's regular season finale against the Washington Wizards on Wednesday, the coach of the Chicago Bulls looked like a man in need of a vacation. Of course, he's not ready to take one just yet.

No NBA coaching gig is without its stress, but Thibodeau has endured more than most this season. Much of it he puts on himself. Thibodeau might be the closest thing the NBA has to a football coach, a profession distinct by long nights in the office and borderline psychotic dedication to preparation. That's Thibodeau. He's known to study film relentlessly and spend hours formulating game plans. He's known to bark at his team and bark at referees. Tom Thibodeau doesn't just preach intensity, he lives it.

The Bulls are a serious group, but they're not nearly as uptight as their coach. As a door swings open in the locker room before Wednesday's game, the only sound you can hear is Joakim Noah's singing voice. He's belting out the verses from Jimmy Buffett's "Margaritaville" with no remorse. When Noah enters the locker room, one of the reporters tells him Bulls president John Paxson is also a big fan of Mr. Buffett.

"Pax had some wild nights in his day, man," Noah says with a laugh. "You can be sure of that."

The toll of the NBA's eternal regular season schedule can also be seen tangibly on the players' bodies. Taj Gibson returned Monday after missing seven games with a bruised knee, and he's playing now with a bulky brace. Even though Gibson moves well enough against the Wizards, the brace remains a reminder of everything the Bulls have had to deal with this season. It's big and awkward and looks like torture to wear. It's not the most aesthetically pleasing thing in the world. That's your 2013 Chicago Bulls. 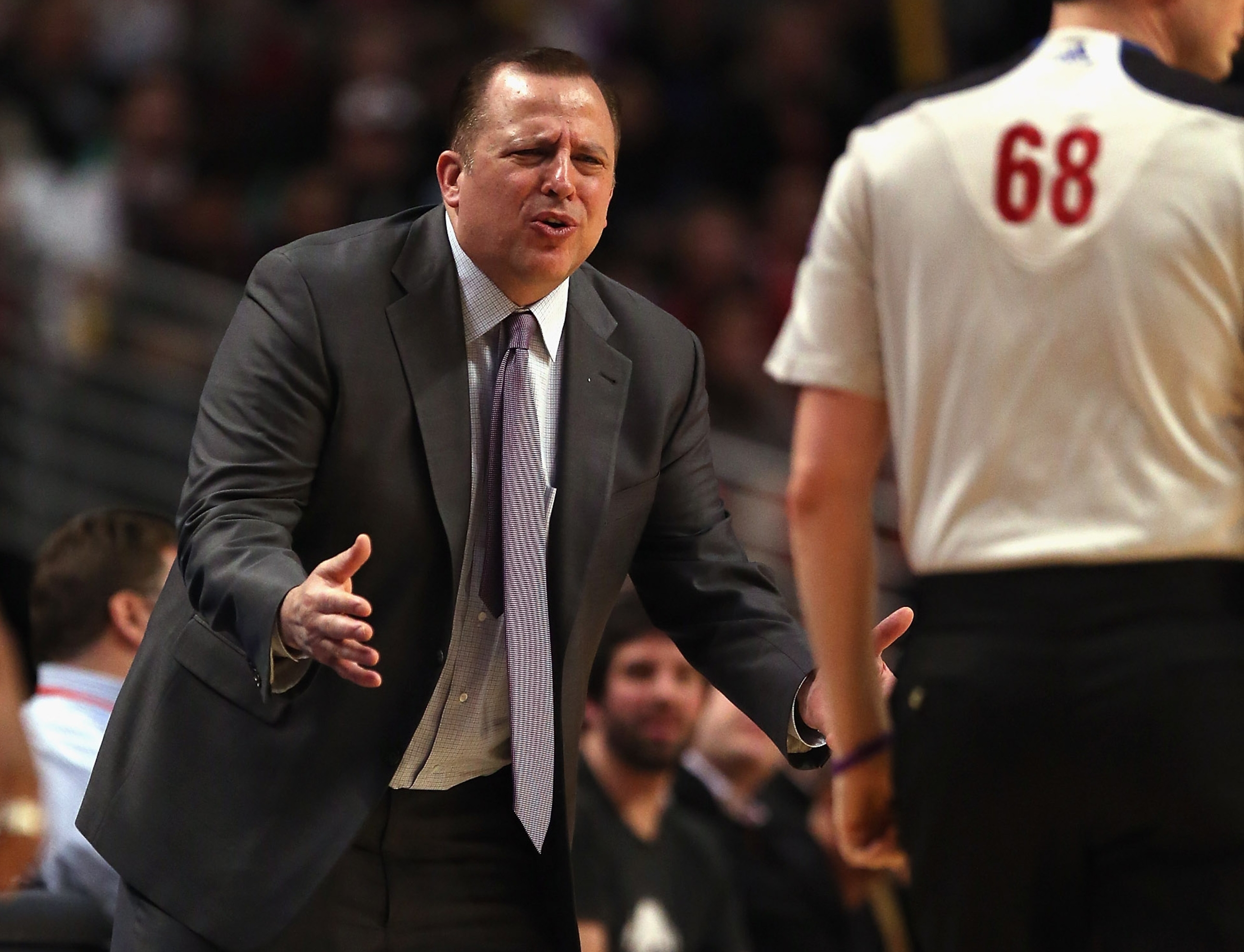 When Thibodeau says he isn't scoreboard watching, you tend to believe him. There's plenty on the line on Wednesday in game No. 82, and it's all under the Bulls' control. Should Chicago defeat the Wizards, or should the Atlanta Hawks lose to the Knicks, the Bulls would end up with the No. 5 seed in the East and a first-round playoff date against the Nets, a team the Bulls finished 3-1 against this year. If Chicago lost and slipped to the No. 6 seed, they'd get the Pacers. The Bulls want no part of the Pacers.

Say what you will about these Bulls, but it's clear they never tune out their coach. There's no "Doug Collins Rule" in effect here. As Jimmy Butler rattles in a long two-pointer with just under four minutes left in the first quarter, Chicago has a 27-7 lead. The media is joking about the Wizards already making offseason plans. The Bulls have come out with the intensity that Thibodeau yearns for.

Of course, it's never easy in the NBA. A.J. Price, Washington's decidedly unspectacular backup guard, torches Nate Robinson in the second quarter for 16 points, and suddenly it's a one-point game. If Thibodeau isn't scoreboard watching, everyone else inside of the United Center certainly is.

The Bulls would extend their lead back up to 11 points in the second half, but Washington isn't about to end their season with a dud. The Wizards have been admirably formidable since guard John Wall returned from injury in January, and they want to go out on a high note.

With three minutes left in the game, Price hits a deep three to tie the score at 85. It's the first time the Bulls haven't led the entire night, but it doesn't matter. Seemingly the moment the ball swishes through the net, the Knicks' victory over the Hawks is complete. The Bulls are the No. 5 seed in the Eastern Conference playoffs, but they still don't want to limp into the playoffs. The United Center is just starting to get into it.

On the very next possession, Jimmy Butler cuts backdoor and Richard Hamilton hits him with a lob pass. The alley-oop dunk works the crowd into a frezy and Washington calls timeout. Free, oversized t-shirts drop from parachutes in the sky, a few more are fired out of a cannon. The UC is alive, even if there's nothing on the line.

A Kirk Hinrich floater and Luol Deng three-pointer later, and it's official. The Bulls have defeated the Wizards, 95-92, and their regular season is over. They finished with 45 wins. It might seem like an unremarkable number at the surface, but Chicago knows what its team accomplished. 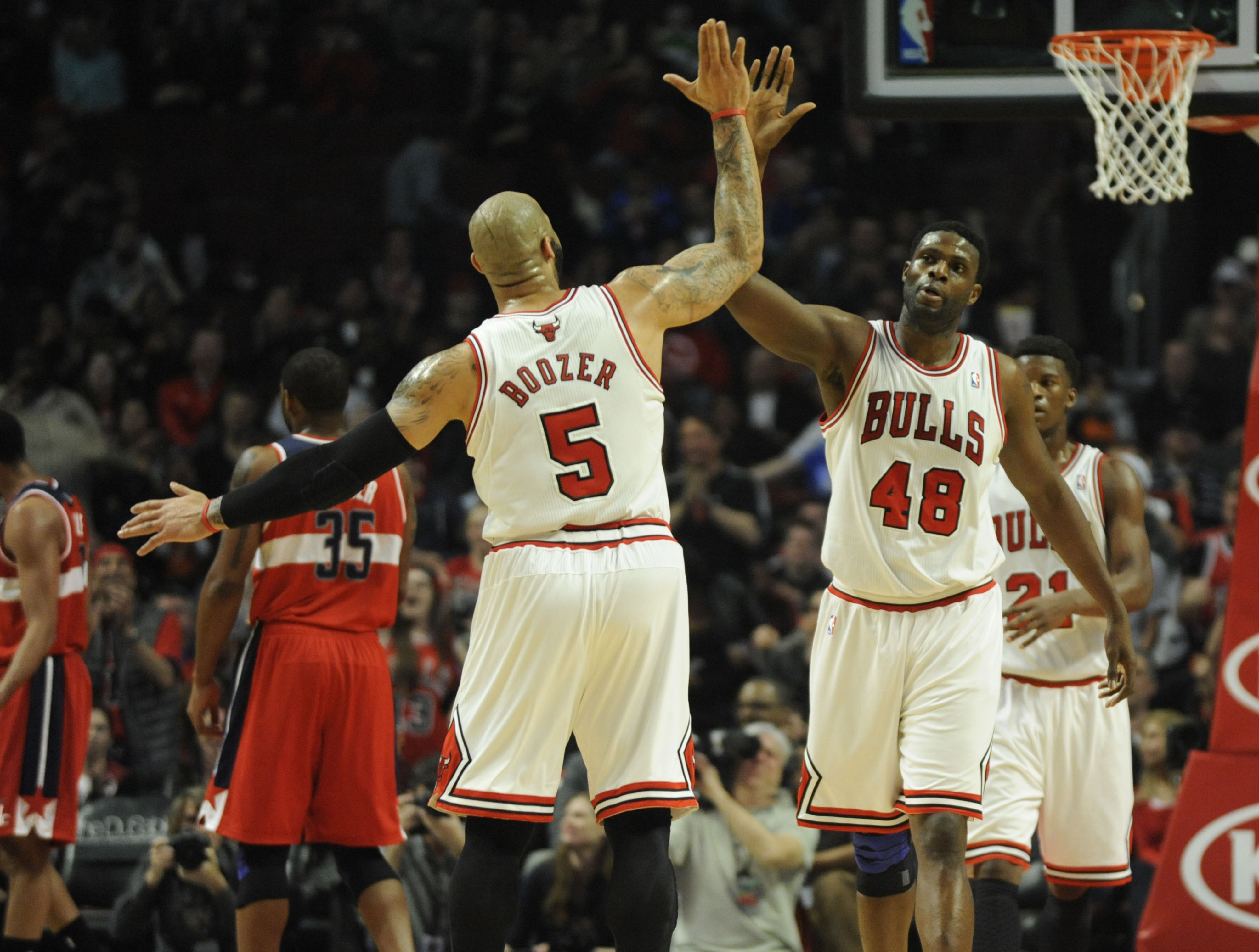 "The Derrick piece we knew this summer," Thibodeau says after the game, reflecting on his team's tumultuous but valiant regular season. "It was going to be a long process. So that one you can plan for. You can't replace Derrick, we understood that. I think the team did a great job of understanding that. The only chance we had was by doing it collectively and playing with big intensity."

"The part that we didn't know was all the other injuries. We knew the core of the team was very good. The challenge was with the new guys coming in, how quickly can we get them all on the same page. That's always a challenge. So I think they responded to that very well."

Thibodeau appears like a taskmaster, a drill sergeant, but it's clear he's still a human being capable of empathy. For as much as he truly believes the platitudes he goes through before and after every game -- Chicago always has "more than enough to win with," the team is constantly instructed not to "skip steps" -- he's aware you can't be perfect every night. This is the NBA, and every team is talented. Finishing with the fifth seed without Rose playing the entire year is an accomplishment, and he knows it.

The players know it, too.

"I feel like we did well," says Jimmy Butler, the second-year swingman whose breakout season played a major role in Chicago's competence without Rose. "Thibs always said we had enough to win and we bought into that philosophy and got it done. It's good to have everyone back. The regular season is behind us and now we got everybody back for the playoffs."

Talking about the impending series against Brooklyn in the locker room after the game, there's a definitive sense of optimism. The Bulls aren't cocky, but they're confident. Having Noah and Gibson back in the lineup certainly helps, though Noah's health remains a huge concern.

Noah is seated at his locker around a gaggle of reporters after the game, his right foot soaking in a tub of ice. He says he feels fine but acknowledges the pain plantar fasciitis has caused his foot. He acknowledges it again when he gets up and limps into the shower. Noah only played 14 minutes against Washington and lacked his usual explosiveness. It's a cause for concern for the Bulls, but they know Noah will give them all he has.

The Bulls don't have championship aspirations heading into the playoffs like they did the last two seasons, not without Rose. But with Noah, Gibson, Deng and Hamilton all available for the postseason, there's a sense amongst the players that this might be the healthiest they've been all season.

"We got all of our bodies back," says Butler. "But if someone does go down, we got to be ready. Of course we never want that to happen. Everybody's back for a reason and we're happy to have everybody."

The Bulls are loose, to be sure. As Kirk Hinrich speaks in hushed tones to reporters, it's hard to hear him over Nate Robinson, who is hooting and hollering for no reason in particular. As Deng speaks to the press, Butler walks over and mocks his earrings. They're black diamonds, and Jimmy razzes him for it.

The sense of accomplishment in the face of an avalanche of injuries for the second season in a row isn't lost in the locker room. The Bulls know true NBA success is determined in the postseason, but at least they gave themselves a puncher's chance to find it there.

"It's been good, man," says Hamilton, reflecting on the season. "We took a lot of hits. Guys been in and out of the lineup all year. We still fought."