Marc Gasol and Zach Randolph have developed incredible chemistry and allowed Memphis to play an old-fashioned style in a game dominated by spacing and speed. Here's one way the Grizzlies use their skills in a hi-lo situation.

In a league of spread offenses and three-point shooting, the Memphis Grizzlies are a throwback to when teams actually played two legitimate post players. Problem is, spacing and speed are so important now that you need adaptive big men that are more than just bruisers.

Zach Randolph and Marc Gasol are more than just bruisers.

It's fitting, then, that the Grizzlies' pet play is a take on the classic hi-lo. One man goes in the low post, the other goes to the high post, and as the ball is swung, the low-post man ducks in to receive a pass from the high-post man underneath the hoop. It's an age-old concept that still works beautifully in Memphis.

Memphis has perfected the play by adding their own little flavor to it. Sometimes, they begin the play with a side pick and roll. Other times, it's a big-to-big baseline cross-screen. They'll even flare the high-post big further out as the low-post big comes down the lane, a la this Bucks' pet play. The above video includes all of those variations.

ORIGINS: The hi-lo has been around for ages.

BREAKDOWN: This play comes from six days ago in a game against the Clippers, Memphis' first-round opponent. It's the first play in the video.

The play begins with Gasol in the high post and Randolph down low. As it starts, Gasol will screen for Randolph to come up and set a ball screen for Mike Conley at the top of the key. This is the kind of action you often see before a standard high pick and roll. 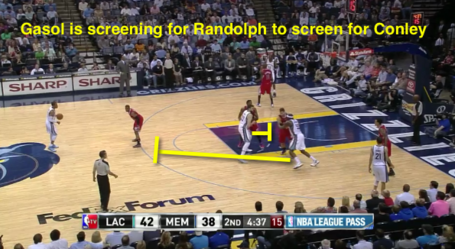 The Gasol pick gets Blake Griffin off Randolph's back. Randolph then screens for Conley, and Griffin cheats, staying in position to protect against what he thinks is a pick and roll for Conley to go right. Problem is, that's not what Memphis is trying to do. 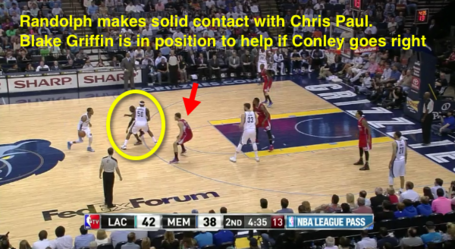 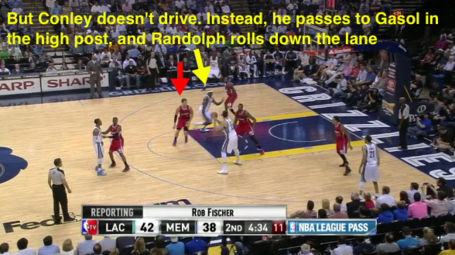 Now, Griffin's in trouble. Randolph has a step on him rolling down the lane, and nobody has stepped in to impede his path. By pretending to run a pick and roll, the Grizzlies have ensured that Randolph will get Griffin on his back when he sets up in the low post. 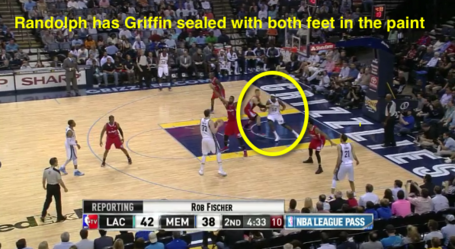 This is what Memphis wants, but it's also an incredibly difficult pass for Gasol to make. The spacing is cramped, and Griffin is starting to recover. Then again, this is why Marc Gasol is Marc Gasol and no other team in the league runs hi-lo like the Grizzlies. Check out where Gasol positions this bounce pass. 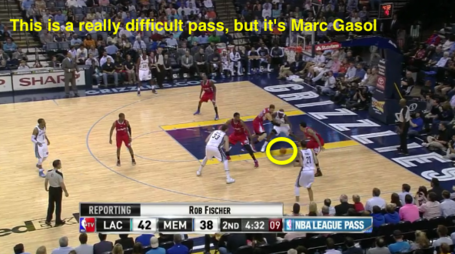 Look at all the Clipper hands reaching in there. Note how none of them get the pass. Instead, this happens. 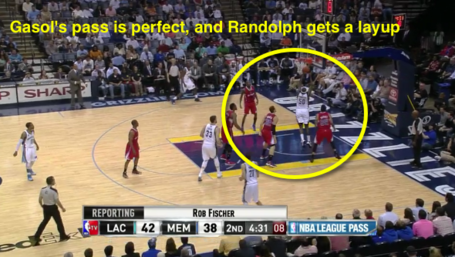 What a pass and finish.

Griffin is still a liability defensively, particularly when guarding the pick and roll and recognizing misdirection, so expect Memphis to use this play in the series.

FREQUENCY: The Grizzlies run hi-lo a decent amount, but they can't do it all the time because that would give away the action. Remember the first rule of good pet plays: the best ones are run infrequently.

CAN IT BE DUPLICATED? Only if you can clone Gasol and Randolph.

HOW CAN IT BE DEFENDED? The fact that Randolph came out to set the ball screen should have tipped the Clippers off. Randolph doesn't usually do that; it's Gasol that usually comes out high. As long as you don't fall for the fakes, you can prevent this play from happening. A lot of teams also play off Gasol to close his passing lanes and make him a shooter. Alternatively, you could pressure Gasol and try to force him to throw an off-target pass.

COUNTERS TO THAT DEFENSE: Gasol has become an elite mid-range shooter and won't hesitate to take the shot if open. He'll also surprise you with a strong dribble drive the opposite way if you play him too close.