Knicks vs. Celtics: Carmelo Anthony's pass and other thoughts from Game 1

Given Boston's defense, Carmelo Anthony had to pass the ball. He succeeded in Game 1. Paul Flannery breaks down the game from New York.

Share All sharing options for: Knicks vs. Celtics: Carmelo Anthony's pass and other thoughts from Game 1

NEW YORK -- Kenyon Martin shook his head. "Terrible pass," he said. So that's what it sounds like when K-Mart makes a joke.

It wasn't a terrible pass when Carmelo Anthony whipped a dart to Martin in the post late in the fourth quarter. It was a tough pass and an even tougher catch, but it was a fantastic read by a player who makes his living as a scorer. That's why it was so important.

All game long the Celtics -- specifically Kevin Garnett -- had been hedging hard against the pick and roll trying to force Melo to do something besides take a difficult shot. And all game long Melo had been willing to comply. 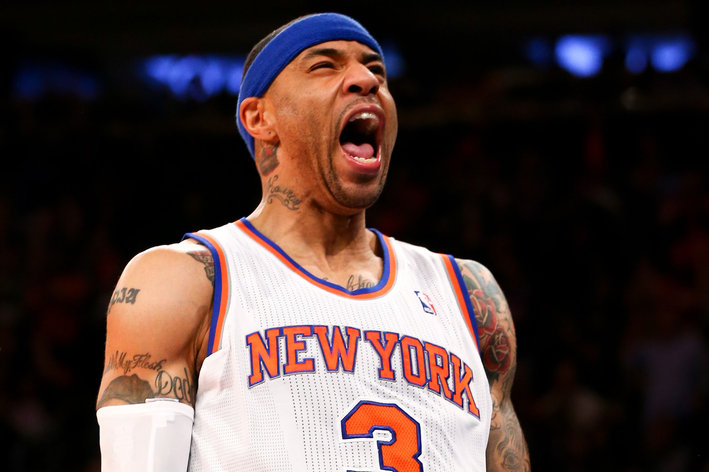 "[The Knicks] did not win the game handsomely, nor did they win it convincingly, but they won it, so this pounding headache and the years taken off our lives are worth it."

Because he is Melo and thus able to score even when he shouldn't, he finished with 36 points on 29 shots. The Celtics will take both numbers, thank you very much. They know he's going to score a ton of points, but they want to make it as tough as possible. So, the hedge came as it had all game long and Melo made the adjustment that superstar players need to make in those situations and made the pass for his first assist.

"I didn't even think it was going to get through," Anthony said later, but it did and Martin made an even better catch before finishing the play that finally put Game 1 out of reach, 85-78.

Before we return to the matter at hand, we need to acknowledge that the last time the Knicks led in a series was April 29, 2001, when they took a 2-1 series lead on the Raptors thanks to 24 points from Allan Houston. The big man was Othella Harrington and even Felton Spencer played a minute that night. It's been a while.

There was some talk about the Celtics blowing a game they could have stolen, but don't get it twisted. This was a game the Knicks had to have and Anthony went out and won it. He was scorching hot at the beginning, cold in the middle and amazing late. He wasn't perfect but he was the most important player on the floor and will be every night. This series is his responsibility and he took care of business in Game 1.

"It's going to be a battle," Melo said. "Although we won tonight we really didn't do nothing."

He's right about that. The Knicks didn't play that well and the Celtics were even worse, so while the C's could only shake their head about letting the game slip through their fingers like so many turnovers, the Knicks did what teams with homecourt advantage are supposed to do.

This is progress, both for the Knicks and for Anthony. He'll have to make more shots and better reads as this series goes along, but on Saturday he made enough of the former and the right one at the right time.

A certain shade of green

It's been well documented that the Celtics were close to signing Kenyon Martin. Oops. At the time the decision was justified. Martin didn't play well with the Clippers last season and the C's thought they would be better off adding for the future and taking a chance on some younger players. In hindsight, it's already come back to haunt them.

Martin had 10 points and nine rebounds, outscoring and outrebounding the C's backup bigs by 10 points and nine boards. That'll happen when their collective line read: DNP-Coaches Decision. Doc Rivers used three players off the bench, all of them guards, and they went 0-for-7.

Martin and Jason Kidd played almost 64 minutes, totalling 18 points and 14 rebounds, including seven on the offensive glass. All of them killers. Kidd may have lost about three steps, but he made so many smart, subtle plays that Rivers commented, "He beats everybody with his brain." 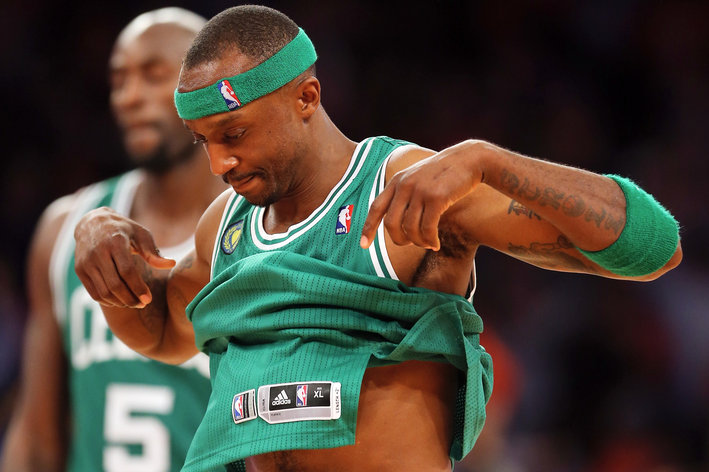 "Doc Rivers has got a problem and it's not really his fault. In the past he has had reliable bench players, so rotations were usually set in stone before the playoffs. Heck, in those seasons it would've been concerning if he did something contrary to the norm. But this year is different."

Collectively, Kidd and Martin have appeared in almost 250 postseason games and together they've been in 52 playoff games. The only thing missing on Saturday was Keith Van Horn and maybe Kerry Kittles. As Knicks coach Mike Woodson said, "That was the whole reason for bringing them on board."

On the other side, the Celtics bench was abysmal. Jason Terry continued his season-long inability to make shots and the best pass Courtney Lee made all night was to Martin when he unfortunately tried to save a loose ball under his own basket.

"Our bench has to give us something," Rivers said. He got nothing but a few minutes rest for his starters who scored 74 of their 78 points.

A different shade of Green

It was as if Jeff Green decided to play his entire career in the course of a single game. He scored 20 points in the first half on 10 shots, and then went 1-for-5 in the second. OK, this is what Green does and there was no question he was gassed at the end of the game after he logged 45 minutes and played every second of the second half. (See bench: lack of.)

The C's will take his 26 and 7 every day of the week, but when they needed a shot in the second half the only one capable of creating was Paul Pierce. This is a problem.

Rivers called their spacing "horrendous" and said they "stopped trusting," which is all code for his team waiting for Pierce to save them.

This led to turnovers (21 of them to be exact) and a grand total of eight points in the fourth quarter. Without Rajon Rondo -- you didn't think we'd let this go, did you? -- the C's have an incredibly difficult time creating offense, and they weren't all that good with Rondo in there in the first place. Their margin for error is basically none and it's a credit to them that they even hung in the game that long, which leads to a philosophical riddle. Did they blow a huge chance to steal a game or were they simply bad?

That's a little hard to answer because we don't really know anything about the Celtics these days. On paper, this is a .500 basketball team missing key players. On heart and memory, they're a wounded, but proud team deserving of respect. We've seen this act too many times to write them off yet, but the vital signs ain't looking real good right now.

That brings us back to Green, who may actually have to score 30+ points a game if they're going to win this series. All that said, they played a horrific game on offense, shot 5-for-20 from behind the arc, got nothing from their bench and still could have won the game if they had simply protected the ball a little bit better.

After one game we still don't know who they are yet, or maybe we do. So, conundrum.

No answer for J.R. Smith

J.R. Smith was good, not great, but he played under control and kept the crazy to a minimum. Again, the Celtics will take every bit of Melo and Smith shooting 20-for-48 and they'll gladly take the 51 points they scored as the price of doing business.

The Smith matchup is fascinating in this series because the Celtics don't have a great counter. It's telling that Rivers went to Courtney Lee last in his three-guard rotation in the first half and the called Lee's number first in the second. They're searching.

Woodson doesn't really have those problems, even with Pablo Prigioni inactive for the first game. Starting Chris Copeland didn't have the desired effect and Tyson Chandler looked either rusty or hurt or both, but in Smith, Kidd and Martin he has three viable options off the bench. Rivers has Jordan Crawford and prayer.

OK, while we're on the subject of spiritual thoughts let's just get it out of the way. It's very, very difficult to put sporting matters on the agenda when the city of Boston has gone through what it just went through. No one has slept more than 20 hours this week -- your faithful narrator included -- and even with the climactic events of Friday, everyone is still very on edge and totally drained.

Before the game, the topic of idle conversation was simple: "How are you doing?" and everyone -- everyone -- has a story about someone who was there. There was a notable difference in the simple human everyday encounters taking place before the game, so much so that Rajon Rondo actually shook my hand, which has never happened before and probably won't ever again. Like me and a lot of others, Rondo was on lockdown on Friday.

Still, we're all thankful for the diversion sports provides. (God bless you, Big Papi. You said what we were all thinking.) And, speaking for myself but hopefully channeling others, we're all appreciative of the moment of silence before the game and that Melo and Pierce took a moment to say a few words. We're also appreciative that the overwhelming vast majority of people inside Madison Square Garden shushed the few meatheads who booed Pierce when he was making his comments.

So, thanks New York. You know we love you.

Game 2 is Tuesday, which means there will be two long days between games and both teams have an awful lot to work on. The Knicks didn't exactly put on an offensive show in the second half either, scoring just 36 points and shooting 36 percent.

Even when they were scoring points in the first half there was too much isolation and not enough pick and roll. Woodson said they made adjustments in the way they defended Green in the second half and there was that very big issue of letting Avery Bradley cut to the basket for layup after layup.

The Celtics ... yikes. Between the turnovers, the bench play and the overreliance on Pierce to do everything, they have tons of areas for improvement. Rivers was also concerned about Melo getting too many touches late in the shot clock, which is a point of emphasis.

It's an old cliche, but it's been around so long because it's true: A series doesn't truly start until somebody wins on the road. If a handful of plays go the other way, we're having a totally different conversation and if they go the other way on Tuesday, this series may yet live up to our expectations.