Did the Los Angeles Lakers get the ball inside enough?

Many criticized the Lakers for not getting the ball down low enough against the Spurs in Game 1, but was that the real issue? We explain why the fix is more complex than one might think.

Share All sharing options for: Did the Los Angeles Lakers get the ball inside enough?

You heard it. Everyone heard it. According to almost any talking head, including Kobe Bryant from his bed at home, the Los Angeles Lakers didn't do a good enough job getting the ball into the low post in their 91-79 Game 1 loss to the San Antonio Spurs on Sunday.

What I would say if I was there right now? "Pau get ur ass on the block and don't move till u get it" #realtalk

Gotta milk pau in the post right now and d12. Will get good looks from it

Do they have a point? It depends on how you frame the argument.

The Lakers certainly tried to get the ball in the post a lot. Of their 103 plays tracked on MySynergySports.com, 48 of them were called to get the ball inside as a first option. Many of the other plays were offensive rebounds, transition opportunities and late-game possessions where desperation threes were needed, so realistically, you can cut off 20 or so possessions from that 103 number to get a real picture of post opportunities taken. When you try to get the ball inside over half the times you possibly could, I think you're trying pretty hard.

And yet, despite the low-post ability of Pau Gasol and Dwight Howard, the Lakers weren't especially successful with whatever they tried to do. They scored just 11 times and drew fouls on six other opportunities for a total of 17 productive possessions out of 48. Clearly, something wasn't right with whatever the Lakers were trying to do.

In watching the tape, I see a few scattered reasons. There were certainly a couple possessions where Gasol could have been more aggressive. There were a few others where the Lakers' guards threw terrible entry passes that led to turnovers. But the two biggest problems I noticed: a lack of motion setting up the post-ups, and poor perimeter shooting cramping the spacing.

Let's hit the latter first. The Spurs' strategy throughout the game was to aggressively front while providing a lot of backside help to prevent the lob pass. If that failed, they "dug" down with one or two perimeter players after L.A.'s bigs put the ball on the floor. That means they would cheat off their men on the perimeter without fully committing to double teaming until the big man dribbled to a certain spot on the floor. This is the kind of strategy that was illegal when Bryant first entered the league, but is common now.

Here's an example of how the fronting threw the Lakers off. This is early in the game in a transition opportunity. Howard does the right thing and goes right to the block looking for an early post-up. But the Spurs don't give it to him, fronting him with Tiago Splitter and using Kawhi Leonard to provide help against a lob pass. 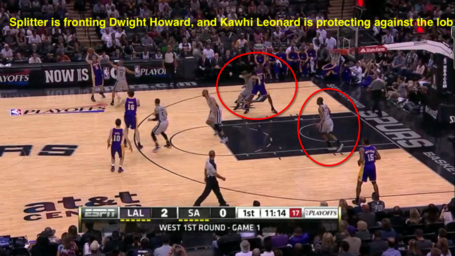 For all the Lakers' best efforts, there's no pass here. Blake tries swinging it to Gasol for the hi-lo, but Gasol is too far out and Tim Duncan pressures him beautifully, forcing a terrible pass and a turnover. 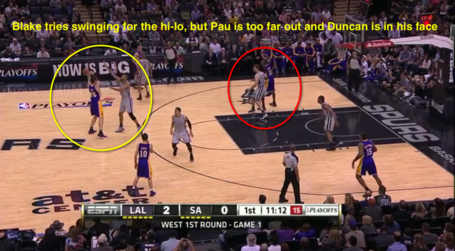 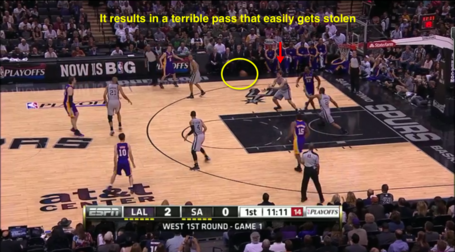 That set the tone for the rest of the game. Look at these other examples of the Spurs fronting the post beautifully. 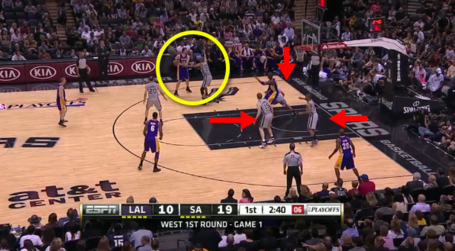 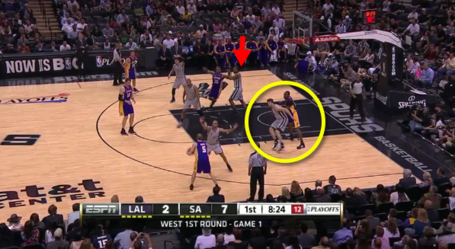 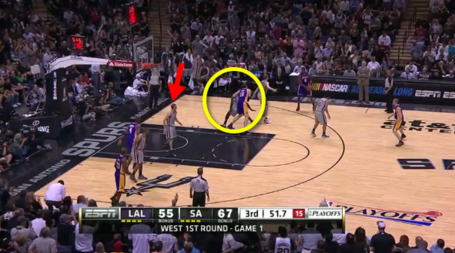 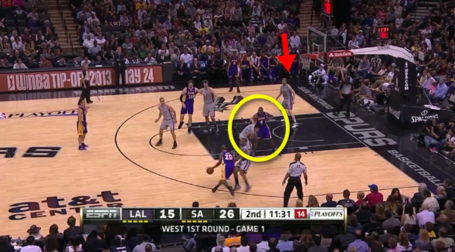 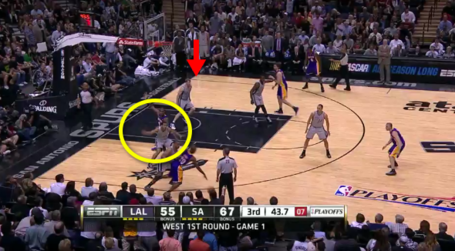 It's impossible to throw a good entry pass under these circumstances. Better perimeter shooting would help, as would very quick ball movement, but the Lakers lack the former and didn't really do a good job of doing the latter on Sunday. (Note, too, how pressured the passer is on many of these plays. That only makes it harder).

When the Lakers did get the ball inside, the Spurs were very smart with their help. They consistently ignored top-of-the-key shooters and generally weren't afraid of the strong-side wing perimeter man either, especially because Steve Nash was off. You often want to be careful helping when it's easy for a post player to find the man closest to him with a kickout pass, but the Lakers' lack of shooting and San Antonio's superior positioning made it work.

Here are some examples of this phenomenon at play. Here, watch how Manu Ginobili zones up as Howard starts backing his man down, only to come hard when Howard gets to a certain point in the lane. 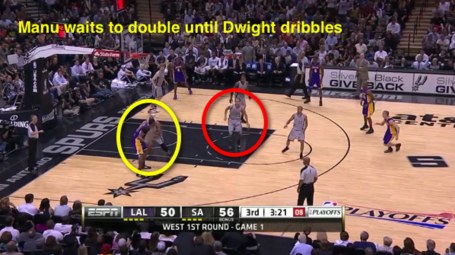 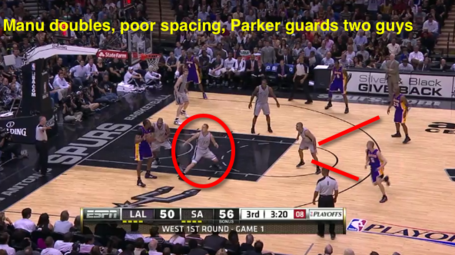 The Lakers aren't prepared for this. Ginobili's movement confuses Howard, forcing him to pick up his dribble. When he does, the Lakers are spaced poorly, allowing Tony Parker to guard both Steve Blake and Jodie Meeks. This eventually ends up in a turnover.

Here's an example with Gasol. Look how poor the spacing is when the Spurs dig down on him. 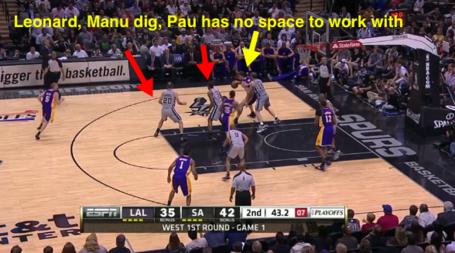 Where is Pau supposed to go there? Unless he spins baseline for a fadeaway, there's nowhere he can turn. He eventually tries a shovel pass to World Peace that fails because there is too much traffic. 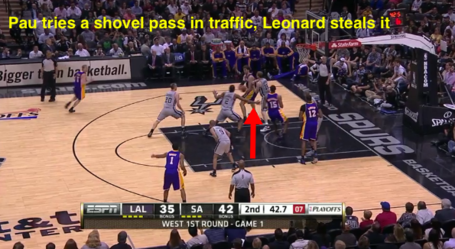 Even when the Lakers had decent spacing, they still couldn't make the Spurs pay for their coverages. Look how slow the ball movement is on this last-second possession at the end of the second quarter. 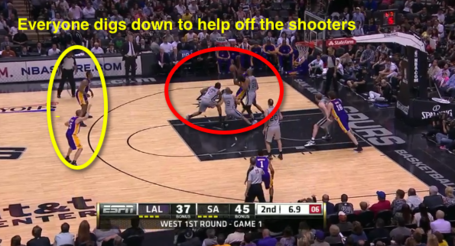 This should result in an open three for somebody. Instead, Howard's pass out is a bit off, Blake doesn't think about the corner shooter fast enough and Darius Morris tightens up. 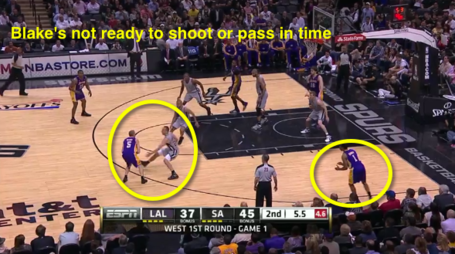 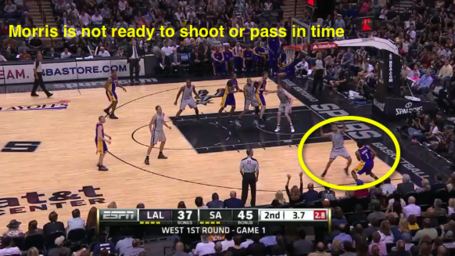 It also didn't help that the Spurs consistently ignored World Peace at the top of the key, using Leonard to double the post when appropriate. World Peace only made San Antonio pay once for this strategy.

Here's an example where he didn't. The Lakers try getting Howard early position immediately, and the Spurs initially dig down with Danny Green off Steve Nash. 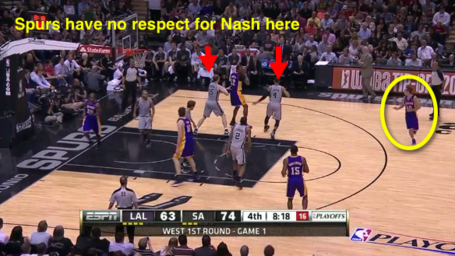 The Lakers counter this by reposting Howard, but when they do, Leonard, and not Green, comes back to half-double. 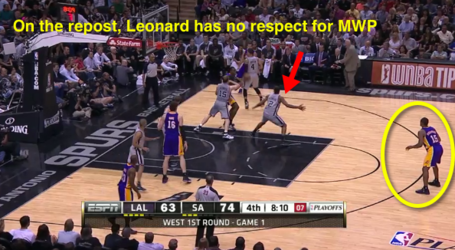 Howard makes the right play to kick out, but the Spurs' strategy is vindicated when World Peace and his slow release get blocked by the recovering Leonard. 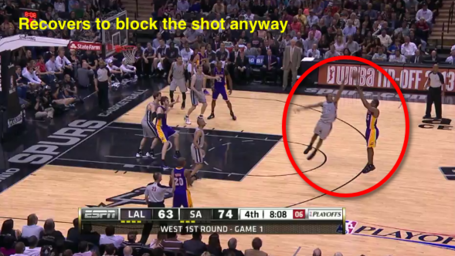 In all of these instances, the Lakers' attempts to run offense through their bigs down low were thwarted by San Antonio's ability to shrink the floor. Jamming the ball inside as Bryant seemed to suggest won't work because it's 2013. Half-zone defenses are allowed and teams like the Spurs can run these types of coverages while being able to recover to perimeter shooters. L.A. tried pounding the post and the Spurs' defense was just too good. That was the major issue, not failing to work the ball inside at all.

What is the solution, then? These days, post play has to be preceded by motion or other misdirection to prevent a defense from loading up their coverages like the Spurs did. We saw the Lakers do this a little bit on Sunday, and when they did, they generally were successful.

Here's a great example from the second quarter. The Lakers are going to pretend to run Motion Weak, a Spurs staple (ironically) that I broke down in the Pet Play series. Blake will advance the ball up the wing to Morris, who immediately throws it back to Gasol at the top of the key. 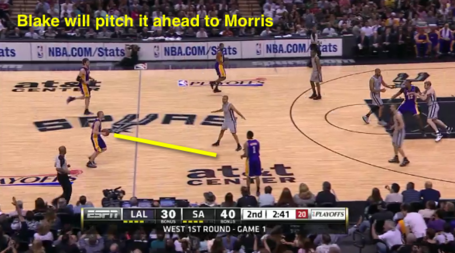 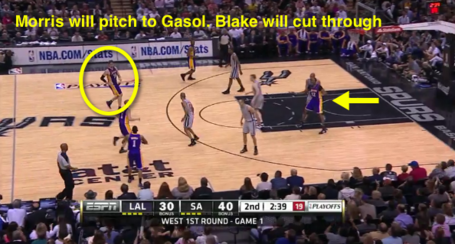 Motion Weak calls for Blake to curl to the opposite side and receive a pass from Gasol, but that's not what the Lakers want to do. Instead, they divert Ginobili's attention, throw it back to Morris and set up a quick post-up for Howard without any Spurs in position to help. 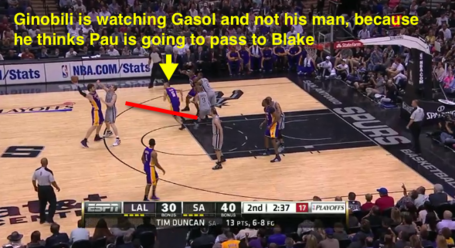 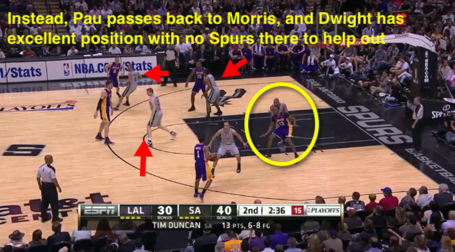 Howard gets a good entry pass and makes a quick move to the middle before Tony Parker can double down effectively. 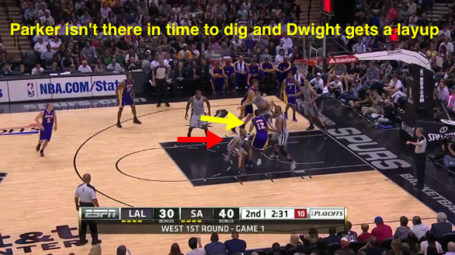 Of course, this worked because of the element of surprise. L.A. will still need to do better on more traditional post-up plays to have a chance in this series.

Still, the adjustment isn't for the Lakers to throw the ball in the post more, it's to set it up more effectively. They tried to post up plenty in Game 1 against the Spurs, unlike what most suggested. They now need to do so in a way that wards off the Spurs' swarming help defense.