The Grizzlies will try to even their series with the Clippers in Game 2. How can they do it? The three factors begin with pick-and-roll defense, but what else can Memphis do to tie the series before heading back to Memphis?

Share All sharing options for: Grizzlies vs. Clippers adjustments: Pick and roll defense, Mike Conley and crashing the boards

The Memphis Grizzlies lost the first game in their series against the Los Angeles Clippers and looked uncharacteristic while doing so. They were dominated on the boards, outworked elsewhere and uncharacteristically out of sync defensively.

Still, it's a seven-game series, and there's work to be done for Memphis. How can they turn it around? Let's take a look at what the Grizzlies need to do to even up the series Monday night in Los Angeles.

Tighten up their pick-and-roll defense

The Clippers dominated the Grizzlies with basic pick-and-roll plays. The Clippers made ten of their 14 pick-and-roll field goals, and it wasn't just Chris Paul wizardry. The Grizzlies made poor decisions and looked flat-out confused at times. Memphis needs to communicate and make high I.Q. defensive plays to stop the Clippers from putting up 1.45 points per possession in the pick and roll (via MySynergySports.com).

Eric Bledsoe was seven-for seven on the night, and when points are coming as easy as this field goal out of the pick and roll here, it's not surprising. 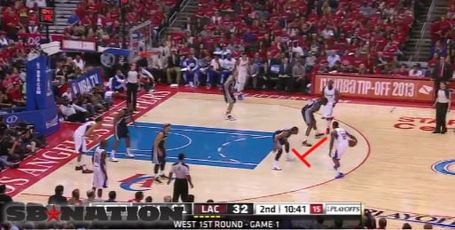 With the defender beating the screen, Bledsoe has a pocket to work with. Because Zach Randolph sags so far off of Bledsoe, there's nothing near Bledsoe to alter to shot. An easy two points. 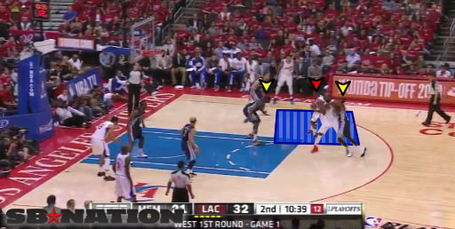 Randolph needs to be willing to challenge the ball-handler here. The Grizzlies need to trust the help defender at the rim and can't give up warm-up field goals. It's a small adjustment for Randolph to move up a few feet to get into the "pocket" created for Bledsoe, but the Clippers can hit perimeter shots and will take advantage of a defense that dares them to do so. 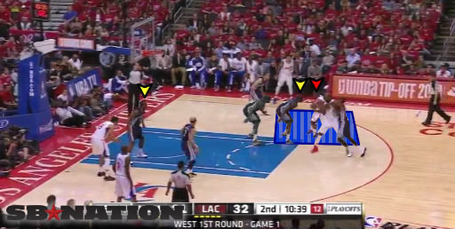 Much of the Clippers' easy baskets out of the pick and roll boiled down to the Grizzlies' failure to communicate and work as a unit. Here, Bledsoe is going to drive on the pick and roll with Tayshaun Prince as the help defender on the play. The Grizzlies will need to switch to deter plays like the following. If the help defender steps into the lane created off the screen and the players switch, the Clippers will have to reset the play. 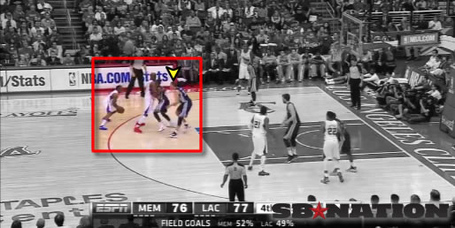 Marc Gasol will also need to react to dribble penetration faster and protect the rim, especially when he's covering a limited big man like Ronny Turiaf. If the perimeter defense fails to switch, the Grizzlies need to have their last line of defense prepared to make a play.

Three defensive breakdowns from Memphis led to an easy basket for the Clippers, but eliminating even one of them can be enough to slow down the Clippers enough for the Grizzlies offense to have a shot. 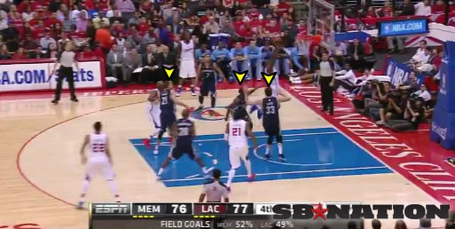 The key in pick-and-roll coverage will be Randolph though, as exemplified in the first play. Randolph has to be ready to step up and challenge shots, or the Grizzlies defense will continue to fall apart. 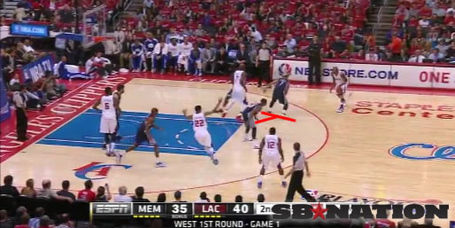 Again, with the defender running right into the screen, the Clippers put the Grizzlies back onto their heels. Memphis is in reasonable position to stop this play, but notice Bledsoe is creeping around the arc with his man helping on the pick and roll. 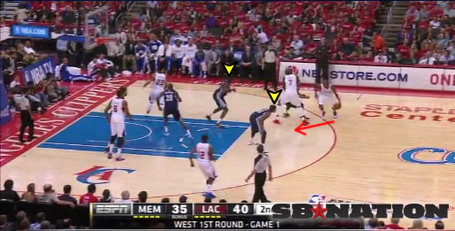 Jamal Crawford settles into the pocket created by the screen. This is where the Grizzlies need to adjust, sending Randolph to challenge shots, especially with two defenders in the painted area as is. Keyon Dooling is completely out of position here, but at the very least can close out on Crawford since Randolph is standing so far out. 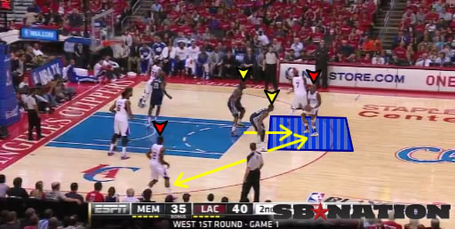 Instead, Dooling panics and turns to look for his man. Randolph doesn't bother closing out, and it's another easy pick-and-roll basket for the Clippers. 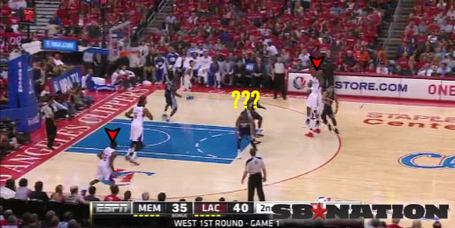 With a few minor tweaks and better communication, they can definitely disrupt the Clippers' attack in that area. Otherwise, they'll look like Mike Conley spinning around, confused, and lost by a screen.

The Grizzlies' perimeter shooting is one area of their offense that is cringe-worthy. But because Memphis doesn't have many options on the perimeter, Conley needs to step up and make shots. In Game 1, he had plenty of open looks but failed to deliver for Memphis. Here's a look at a bunch of shots he missed

Each of these open looks were misses for Conley. He ended the night with 12 points on 5-of-11 shooting and missed all three of his three-point field goal attempts. The Grizzlies are most effective when they can use Gasol and Randolph around the post, but if the Clippers can pack the paint, then they can minimize the effectiveness of the two bigs.

This is Conley's shot chart. 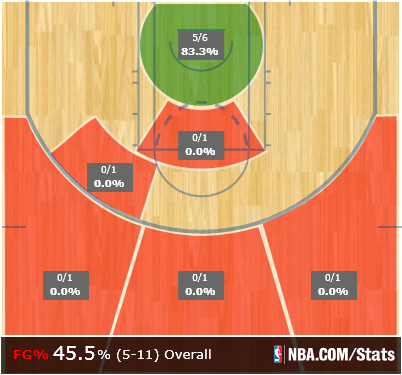 Conley was effective at finishing around the rim, going five-for-six, but missing all of his perimeter jumpers shrinks the ground that the Clippers have to cover and lets them off the hook in an area they struggle. With the Grizzlies being limited offensively, they need Conley to provide enough punch to support their defense.

The Grizzlies were atrocious on the glass in Game 1. They were outrebounded, 47-23, and the Clippers also had 14 offensive rebounds. Gasol and Randolph combined for six rebounds. These numbers are all unacceptable, especially allowing 14 second-chance opportunities to the Clippers. It's unlikely Memphis allows that kind of performance again, as they were at the top of the league in fewest opponent total rebounds allowed.

Randolph and Blake Griffin are isolated in the post here. 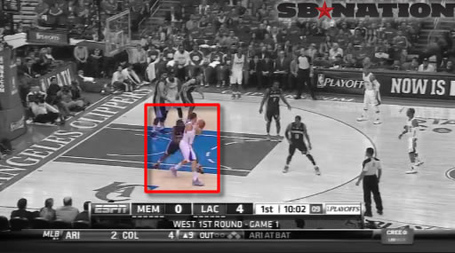 Randolph does a good job defending Griffin and forcing him into a tough shot. There are three Grizzlies with an inside track to the rim, and Conley is also within range. 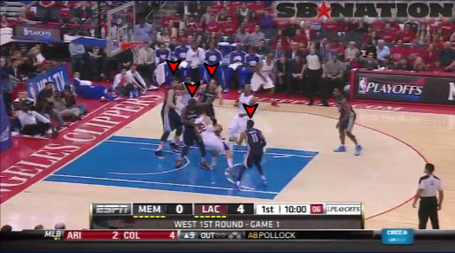 Caron Butler somehow squeezes between those three defenders and comes away with the offensive rebound. The Grizzlies have to box out, especially when they have inside presence after a good defensive stop. 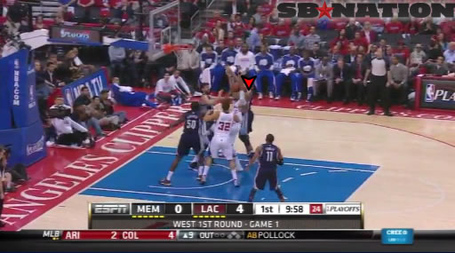 Here, DeAndre Jordan is going to outwork Randolph in the post for an offensive rebound. 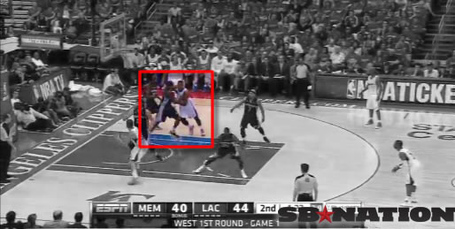 Jordan pushes Randolph out of the way, jumps up, and tips the ball back out to the perimeter. 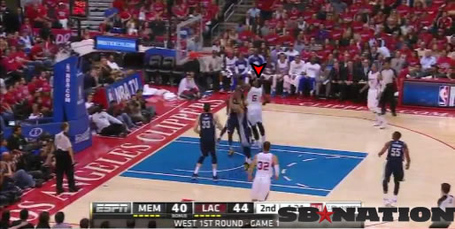 The ball goes directly out to the perimeter for a second-chance three-point field goal. 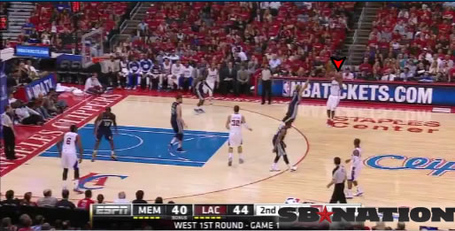 The Grizzlies are known for their physical play but will have to remain focused as the Clippers aren't going to lie on the ground for Memphis.

Matt Barnes had two great tip-ins in the game. The back-breaker above came during the final seconds of the first half. Jerryd Bayless completely lost his man and didn't box out at all. While Gasol is there, he cannot box out two people. The Grizzlies can't have mental lapses like that above, as they again make a good defensive play only to give up second-chance points.

The Clippers did a great job taking advantage of the Grizzlies' pick-and-roll defense while also dominating the battle of the boards. If the Grizzlies are able to bring their usual intensity on the defensive end, the series is far from over, and Game 2 should be a great game. If not, and Conley isn't able to stretch the floor, the Grizzlies could be looking at a two-game hole when they return to Memphis.