The Clippers are a hell of a drug

Chris Paul killed the Grizzlies at the last second, and two games into the NBA Playoffs, it's time get serious about the Clippers.

Share All sharing options for: The Clippers are a hell of a drug

Well, the NBA Playoffs officially started with Monday night's Clippers-Grizzlies game. There was LA's outrageous first half, the Memphis comeback in the fourth, Tony Allen's hand-to-hand combat with Chris Paul, Zach Randolph's war with the world, and then Paul in full-on God mode over the final five minutes. It was perfect.

This is the most insane great basketball team we've seen in a long time. At one point toward the end of the first half in Game 2 Monday, they were running with Paul, Eric Bledsoe, Jamal Crawford, Blake Griffin and DeAndre Jordan, a lineup that leads to 150-mph fast breaks, Bledsoe dunks and wide-open looks for Griffin and Jordan. Then, when things break down in the half court, the ball goes to Paul and Crawford and it's their job to do something crazy. The Clippers are a 13-year-old's video game roster brought to life.

All of this was incredible to watch in the regular season, too, but it's a little more jarring to see it all come together here. For instance, you knew Eric Bledsoe was great and athletic and everything, but here he is locking down Mike Conley on one end of the court and slicing through the Grizzlies on the other end, and suddenly he looks like the most dangerous bench player in the playoffs.

You know Jamal Crawford can get hot and turn games into his own personal And-1 Mixtape (as Kenny Smith described it), but it's all a little more incredible when he does it under pressure and the best defense in the league becomes completely helpless for a solid five minutes.

In a series of great offense vs. great defense, offense is winning.

Just barely, though, which is mostly a credit to Memphis. Even with the Clippers hitting on all cylinders all night in Game 2, the Grizzlies stayed within striking distance the entire time. When L.A. started to pull away in the fourth, it looked like a repeat of Game 1, but then Vinny Del Negro stuck with the bench for one or two minutes too long, Mike Conley started hitting, Tony Allen and Marc Gasol were both locked in, and the Grizzlies battled back to make it close. The final minutes gave us everything we wanted from this series all along. Pure chaos.

But the Clippers won, and now the Grizzlies have to win 4 of the next 5 if the want to win this series, so we're talking about the Clippers. And there are three reasons the Clippers are the most fascinating team in the NBA Playoffs.

1. OFFENSE. Because this shouldn't work. Every postseason, Charles Barkley spends at least 20 percent of his time on TNT telling us that jump-shooting teams can't win in the playoffs. Which is true, except for the Magic in 2009, the Mavericks in 2011 and the Thunder in 2012. In other words, it's possible to play like this and win with good shooting. You just have to be really good. Two games in, the Clippers are passing the test, and there's no team in the NBA that's more fun to watch. The question is whether they can keep this going for another three to six weeks. 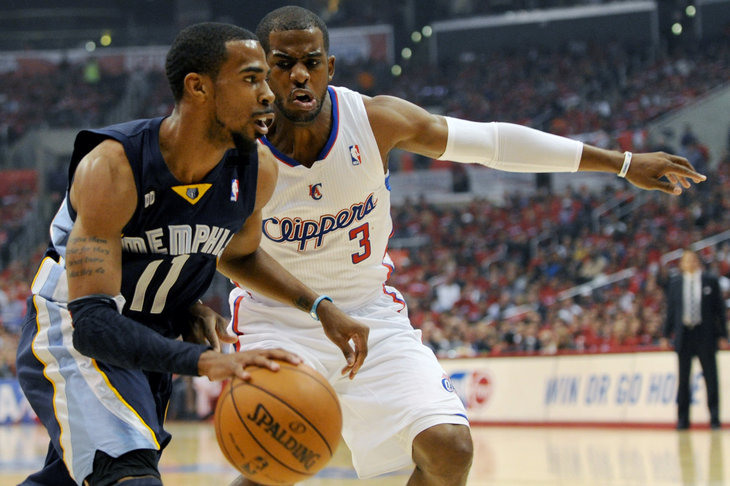 For the record, he's done a (mostly) great job so far. He's struck a nice balance managing the second unit early in games, the Clips defense has been solid on the whole so far and he probably deserves more credit than he'll ever get for L.A. looking as good as they have the past two games.

On the other hand ... two problems with Del Negro. First, he's doing the same thing he did last year, where he stays with his subs too long in the fourth quarter. I have no idea what he thinks he's saving Paul for, but once you hit the 10-minute mark in the fourth quarter, the best point guard on earth should be in the game. This is easy. Especially Monday night. The Clippers bench had a 12-point lead with just under 10 minutes left. If Chris Paul goes in at that point, it's hard to imagine Memphis ever making it all the way back. Instead, Del Negro left the second unit in the game for another two minutes and the Grizz cut it to seven points before Paul returned, giving them just enough room to make things interesting down the stretch.

The other Del Negro issue: His obsession with Chauncey Billups. There's nothing that wrong with Chauncey Billups, it's just hard to see how Del Negro can justify keeping him in the game over Eric Bledsoe in crunch time, especially given how great Bledsoe's been on defense. Again, Del Negro gets ZERO credit for the things he does well, so it's not to pick on him too much. But his over-reliance on the bench and his inexplicable trust in Chauncey Billups are two issues that will haunt the Clippers for the rest of the playoffs if nothing changes.

Which is important because...

3. Chris Paul will not lose. We talked about Chris Paul yesterday, and it bears repeating after what he did in Game 2: Chris Paul is a f***ing nightmare. He's out of control. We're used to loving the Clippers as a fun, good team that's not quite good enough to be great. But with Paul playing like this, they become a different, much scarier team.

He wasn't completely healthy last year, but he's 100 percent now, and at this point all bets are off. When Chris Paul is playing in God Mode, the Clippers can beat anyone. This is why Del Negro's coaching matters that much. Because with Paul playing like this, we're talking about a legitimate contender in the West. A team that can take care of Memphis sometime in the next week and then move on and stun OKC.

People will remember Chris Paul's game-winner over Tony Allen and three other Grizzlies, and that's fair. It was doubly impressive because as soon as L.A. took a timeout, everyone in the world stopped and said, "OK now let's watch CP3 kill the Grizzlies." And he did!

But really, everything Chris Paul did in the fourth quarter was just as ridiculous. With the game getting tight and L.A.'s offense breaking down, he scored the final eight points for the Clippers, hitting pull-up after pull-up with various giant Grizzlies in his face. The game-winner only underscored the point he's been proving all along for the past two games: The team with Chris Paul does not lose here.

Everything else in this series is dead even, and Chris Paul is the difference.

Everything else in this series is dead even, and Chris Paul is the difference.

That's what's so great about watching the Clippers. The offense is built on a foundation of reckless fast breaks and dunks and irresponsible Jamal Crawford isos, they inevitably drive you insane with Vinny Del Negro's decision-making somewhere along the way, but then if things get close at the end you remember, "Oh, right, I'm watching the best point guard in basketball and holy shit he's incredible."

It's all pretty addictive. Sure, there's a chance we're overreacting and sometime in the next few weeks they'll self-destruct just like we expected. But L.A.'s batshit approach is working so far, Chris Paul is killing everyone, and it's too much fun to not get on the bandwagon.

Two games into the NBA Playoffs, I'm officially drunk on the Clippers, everyone's showing up for L.A., and we should all be terrified of betting against a healthy Chris Paul in pretty much any series. And in a season where OKC has always been preordained for a rematch with Miami, suddenly the West has a wild card that's capable of anything.