Will Dwight Howard have any better championship options than L.A. Lakers?

Dwight Howard will be a free agent in July. If he prioritizes a championship, are there any better options than L.A.?

Share All sharing options for: Will Dwight Howard have any better championship options than L.A. Lakers?

The L.A. Lakers do not appear to have miracles up their sleeves. The team fell behind the San Antonio Spurs, 0-2, on Wednesday; unsurprisingly, the Lakers' poor bench -- a unit stretched even thinner by injuries to Kobe Bryant and Jodie Meeks -- was destroyed by that of the Spurs. While San Antonio has a nice offense, L.A.'s resistance was just so futile: the Spurs scored their 102 points in just 86 possessions, for an offensive rating of 119.

The series shifts back to STAPLES Center, where the Lakers are better, but likely still not good enough to win two to even the series. And even if they did, they'd still need to win one in San Antonio eventually, a task looking ever more impossible with each game. If the Lakers fail to advance, we'll have seen the team's earliest ejection since 2007, which is when Kobe Bryant last made a trade demand.

The star in danger of flight isn't Kobe this time: it's Dwight Howard. He will be a free agent on July 1 and has been coy about his future. One of the things he's discussed is that the likelihood of winning a championship will be high among his priorities.

Now, I'm not sure that's believable. As I've repeated a number of times: never trust the motivations of a man who can be bought with candy. Saying you'll go to the team that offers the best chance for a title is a nice thing to say, but coming from Howard, it's more like a Madlib blank asking for a sports cliché. 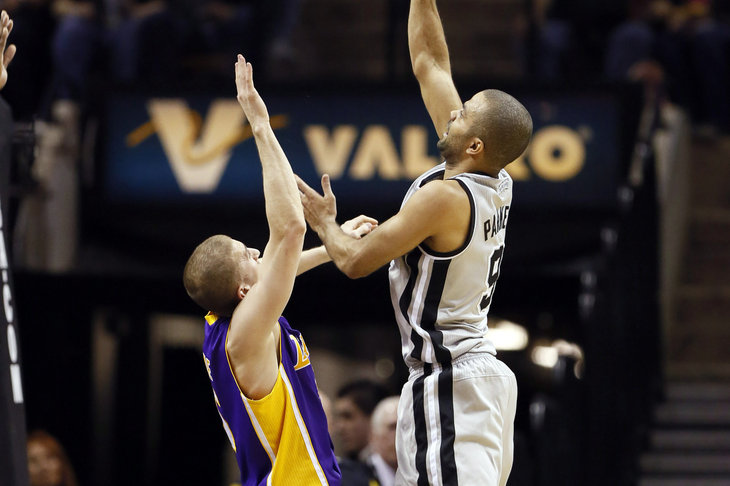 But let's imagine for a second that a championship within the next four years is Dwight's real motivation. Is L.A. the place to do it? Or should one of the other potential suitors get the nod?

LAKERS: L.A. has two distinct advantages: gobs of money and Kobe Bryant. The money thing is no small issue: L.A. can, if willing, paper over most deficiencies. And when I say paper, I mean paper. They can fund a $100 million payroll (before taxes) with local TV money alone! That said, new NBA rules to minimize teams' ability to sign players while over the tax line hurt this superpower. They don't kill it, but they slow it.

Kobe is a major title asset for two reasons. First and foremost, he's a great player. But he also is a veteran who commands respect within STAPLES and who, as a guy nearing the end of his playing career, demands a great supporting cast. There is no fear the Lakers will tank with Kobe on the roster. It's all about maximizing title chances right now for this franchise.

In addition, the Lakers have transactional advantages. L.A. has Howard's Bird rights and can offer him a longer deal with bigger raises than any other team. In the end, I think that wins them Dwight, despite a disappointing season.

This roster no longer looks like a championship contender, even when Kobe gets healthy.

That said, this roster no longer looks like a championship contender, even when Kobe gets healthy. Steve Nash has been a mess, and I'm not sure I'd even be surprised if he talked about retirement next week. Pau Gasol continues to show things, but has been an awkward fit with either Howard, Mike D'Antoni or both. D'Antoni himself has not helped his reputation as a poor defensive coach. The team won't have a first-round draft pick unless it buys one, and will be stuck with the mini mid-level and veteran's minimum contracts unless Dwight leaves or someone like Gasol is traded in an unbalanced salary swap. After the debacle of 2012-13, I'm not sure you'll get too many picking the 2013-14 Lakers for the Finals.

What other options could present themselves?

MAVERICKS: The most popular Dwight recruitment city is Dallas, who will have cap space, Dirk Nowitzki and a gaping hole at center. Nowitzki was a beast down the stretch, averaging 19 and 7.7 per game on 50 percent shooting after the All-Star break. Unfortunately, the team's guards didn't come along for the ride, and that will still be an issue for Dallas looking forward. But there are some intriguing perimeter players hitting the market as well, and one of those may be available with the full mid-level. O.J. Mayo may be back and Dallas had Bird rights for Darren Collison and Anthony Morrow. Things could happen very fast for the Mavericks if Dwight heads there.

And, let's be real: the Mavs weren't that far behind the Lakers this season without Howard.

HAWKS: Atlanta will be in the Howard rumor mill so long as they have cap space. Dwight's hometown team will have $35 million of cap space in July, which could mean adding Howard and keeping Jeff Teague, plus having $5 million or so left to play with in addition to the room exception.

Of course, that would mean exiling Josh Smith to the hinterlands. Smith's a free agent, too, and is reportedly looking for lots and lots of dough. Al Horford, DeShawn Stevenson and Lou Williams are the only rotation players locked up. A Howard-Horford frontcourt could be tremendous, but I'm not sure Lou, Teague and some mid-rung free agents would be enough to move the Hawks far up the East ladder.

ROCKETS: This is the most intriguing option to me. Once the Rockets decline their player option for Francisco Garcia, the team will have about $45 million in payroll locked up for 2013-14. Dropping a $5 million or so player (or a combination of players up to that amount) will give them the space to sign Dwight outright at max.

We'd also get to see Kevin McHale work with Dwight for an extended period of time, which is ... yes. YES.

There are a couple of different ways to peel that lemon. Omer Asik could actually net a decent asset at his price, or Jeremy Lin could be sweetened with one of the myriad young forwards under contract. If you're grabbing Howard, Asik is easier to move than Lin because of positional depth, but Asik is more worth keeping, even if he becomes a sixth man again. If Howard recovers to form, putting him in Houston's high-octane offense led by James Harden and Chandler Parsons would be thrilling. We'd also get to see Kevin McHale work with Dwight for an extended period of time, which is ... yes. YES.

Houston is consistent point guard play and a defense away from screaming up the West charts. Howard has the potential to fix the latter.

SPURS: Manu Ginobili, Stephen Jackson and Tiago Splitter all come off of the books at season's end, giving San Antonio roughly $20 million in cap space. By signing with the Spurs, Howard would have two pretty much guaranteed years with Tim Duncan, Tony Parker and Gregg Popovich. If Manu wanted to extend his career on a discount, his rights could be renounced, and then he could be signed for the full mid-level. It's not the Spurs' style to spend $20 million on one player, but getting Dwight would keep the Spurs as a top-rung contender, give the Thunder and Heat nightmares and be the most awesome turn of events in modern history.

BLAZERS: The Blazers are in a similar salary boat as Houston: they'd need to unload a little to make Howard a competitive offer. But they have quite a bit of space, an opening at center and a nice supporting cast that would definitely make the playoffs with a healthy Howard. If Damian Lillard continues to develop and the presence of Dwight makes the defensive potential of Nicolas Batum and Wes Matthews shine, this could be a damn fine team.

PACERS: I have other ideas for Portland, though. They went after Roy Hibbert a year ago. If they were still interested, they could trade for him while sending the Pacers only minimal salary and draft picks. Indiana would then have room to sign Howard. Or we could get really fancy and pull a three-way deal: Hibbert to Portland, Danny Granger to the Lakers in a sign-and-trade that sends Howard to Indiana. Regardless: Dwight, a re-signed David West, Paul George, George Hill, Lance Stephenson, wins wins wins.

[The location of the above three teams, of course, is a significant impediment. You and I love all three places, but Dwight has been incredibly picky about location in the recent past. See: Dwightmare. I think the Spurs could make a compelling case despite the less glamorous locale. The Pacers could potentially do so as well. I'm not sure the Blazers could convince anyone they would be competitive enough for Howard to sacrifice one of his priorities.]

CLIPPERS: And lo!, the option of a grand F.U. to the Lakers. Chris Paul is a free agent. If Grant Hill ($2 million) retires and L.A. can offload DeAndre Jordan ($11 million) without taking back salary (hello, Portland or Sacramento?), CP3 and Howard could sign for about $15 million each in starting salary, a la the Heat trio three years ago. If the team can find a way to lose Caron Butler (not remotely easy without taking back salary, even if you sweeten with Eric Bledsoe), it could get near max on both CP3 and Howard. The roster would then be Blake Griffin, Howard, CP3, Jamal Crawford and possibly Butler and Bledsoe. You can assume Chauncey Billups might come back on the veteran's minimum and Matt Barnes would take a portion of the mid-level. If Butler's contract expired or he were amnesty eligible (he's not, and L.A. used its clause on Ryan Gomes anyway), this might be a slam dunk: the Clippers are based in Los Angeles, an approved Dwight town, and would be serious title contenders.

But convincing CP3 and Howard to both take less on the fly without a powerhouse GM like Pat Riley while finding a home for Jordan and trying to find a home for Butler ... there are too many ways for it to fall apart. Were I the Clippers I'd focus totally on keeping CP3 long-term. But it's an idea that shouldn't be dismissed if we're trying to find Dwight a championship. It would be his best long-term bet.