Russell Westbrook collided with Patrick Beverley in Game 2 of Rockets-Thunder on Wednesday. Thirty-six hours later, we find out he tore his meniscus on the play, and could miss the rest of the playoffs.

The Thunder are not done yet. Reggie Jackson is a capable replacement at point guard, Serge Ibaka can still be deadly on either end, and when your team has the second best player on the planet, anything is possible.

But Russell Westbrook's injury changes everything.

There have always been a solid five teams (Thunder, Spurs, Nuggets, Clippers, Grizzlies) who could win the West this year, but everyone's chances got a lot more realistic now that OKC is mortal. Anything could happen here. Kevin Durant could average 40 a game for the rest of the playoffs and get back to the Finals, the Clippers or Grizzlies could drop the Thunder in 5 next round, the Spurs could go right back to disemboweling the field just like they did last year. After a year where OKC was statistically head and shoulders above anyone else in the West, it's still a little surreal to see how quickly everything can become a crapshoot. It'll take a while to fully process all this.

In the meantime, let's talk about things from a few different angles.

Patrick Beverley. We will see this replay roughly 10 billion times in the next 48 hours.

It was certainly an obnoxious play. If someone pulled that move in a pickup game, you would be livid, and you would be right. You can get hurt because of stupid "hustle" plays like that, and it's exactly the sort of bullshit play that makes certain players unbearable.

In the playoffs, though? It's hard to make Patrick Beverley a villain for going a 110 MPH in a playoff game. Even if that means he went a little too hard in that specific instance -- where Westbrook was calling a timeout and had his guard down -- Beverley was just playing hard, not trying to attack someone's knee or injure anyone (i.e. the definition of "dirty").

This makes no difference, of course. It doesn't matter whether Beverley meant to be involved in ending Westbrook's season. He's involved regardless, and any time anyone ever remembers that one year where Westbrook tore his meniscus out of nowhere and completely shifted the landscape of the NBA Playoffs, they'll remember Beverley, too.

But no, nothing he did was "dirty".

Will Russell Westbrook come back? Who knows! A few weeks ago, Ron Artest/Metta World Peace came back from a partial meniscus tear in 12 days. Then again, Ron Artest is completely insane. So insane that we weren't even surprised when he came back.

It was just like, "Oh yeah, of course. Ron is f***ing crazy. He was probably talking to pit bulls and eating lead pipes for two weeks. Makes sense."

So who knows. He's going into surgery ASAP, and after that's done, we'll have more information about the extent of the damage and the recovery time. You have to think he's out at least a few weeks, though, and probably long enough to cost him the bulk of the playoffs.

For now, this falls under the "Anything can happen from here" umbrella.

Did Lil B curse the Oklahoma City Thunder? NO.

KEVIN DURANT WILL NEVER WIN THE TITLE AFTER HE SAID "LIL B" IS A WACK RAPPER,"THE BASEDGODS CURSE"#THEBASEDGODSCURSE ON DURANT - Lil B

If you remember, the Based God later lifted the curse on KD and the Thunder, so it's impossible that Lil B cursed the Thunder and caused Westbrook to tear his meniscus. I've done this research so you don't have to. Let's move on.

Reggie Jackson is better than you think. He's athletic, crafty, and has spent the entire year surprising Thunder fans and everyone else, prompting everyone to say, "Hey, Reggie Jackson is pretty underrated coming off the bench for them." We've been saying this since October. He'll be solid, and he's a huge reason OKC still has a chance here.

On the other hand:

Reggie Jackson is not Russell Westbrook. The flip side of "Reggie Jackson is better than you think" will come when OKC wins this Houston series and people start wondering whether the Thunder are just as good without Westbrook. They are not, and especially in a series where someone like Matt Barnes or Tony Allen spends 48 minutes beating up Durant and denying him the ball, they will badly, badly miss Westbrook's ability to create buckets out of thin air. OKC is not done without Westbrook, but their road gets much tougher starting in the second round.

Will Russell Westbrook still dress like this on the sidelines for the next month? 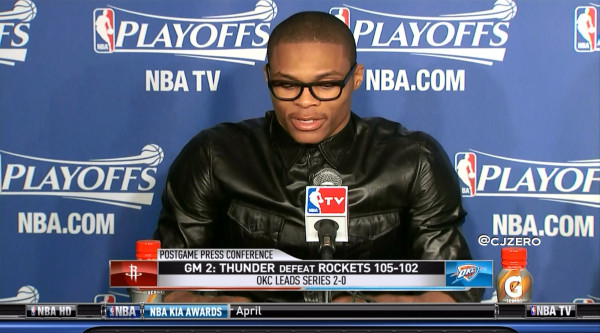 Yes, and he will have a new outfit for every quarter. Stay fabulous, Russy!

Who's the West favorite now? The Spurs, probably. Manu Ginobili is healthier than anyone realized a week ago, and it turns out that the literally-crippled and half-dead Lakers are the perfect punching bag for the Spurs to get themselves tuned up for the rest of the playoffs. Looking ahead, they'll be heavy favorites against a depleted Nuggets team or the Warriors, and then ... God only knows who they'll get in the West Finals, but they will likely be favored regardless.

Having said all that, I think whoever wins Clippers-Grizzlies will win the West. Because (last night not withstanding) Chris Paul is too unstoppable right now and the rest of the Clippers look better than ever. On the other hand, if Memphis can pull of this comeback and win four of five to steal the series, they're a nightmare matchup for OKC and could conceivably roll into San Antonio having exorcised their Clippers demons and beaten the year-long favorites in the West, playing the best basketball of the season. Again, anything can happen, but it's just a gut feeling. Whichever team survives that Clippers-Grizzlies series will ride the momentum to the NBA Finals. Unless ...

Kevin Durant. In the short term, I'm not actually that bummed about Westbrook's injury. I feel guilty about this, and maybe this makes me a bad person. I know we should all be mourning the loss of Westbrook. He's one of the most explosive athletes on the planet. The only player in the NBA who can sometimes leave you as amazed as LeBron James.

Last year I started calling him the kamikaze point guard -- unsafe to himself and others, not entirely trustworthy, but deadly enough to make the whole experience worth it. This is a player who threw his body around the court at 150 MPH every single night, and after a few years, he really seemed invincible. That's why it's such a bummer to see him go out on a freak injury where he was calling a timeout. After all that, he goes out like this?

It sucks. And the entire NBA should hope he comes back better than ever next year, because basketball is just more fun with Russell Westbrook involved.

But for right now I'm excited to see what happens without him for the next month. Partly because the West is now officially up for grabs, but also because of Durant. The Thunder were a longshot to take down Miami even with Westbrook, and losing Russ only makes it more of a pipe dream. But after we've spent the past few years wondering how deadly KD could be if you just fed him on every possession -- and whether OKC might be better off with that approach -- the next few weeks will give us a snapshot of what that alternate reality might look like.

Maybe Durant's challenge becomes impossible with Westbrook going down, but maybe it was always impossible. Watching him try will be a lot more fun now, though.

Durant will have to be the best player on the floor every night for OKC to have a chance, and he knows this. Everyone does. Now we get to watch how he responds. And even with the rest of the West wide open, with teams like the Grizzlies and Clippers and Spurs ready to double-team him to death and pounce on depleted OKC, I'm not totally ready to count out KD.

So there you go. For better or worse, one of the three best players of his generation just got a lot more fascinating for the next month, and we'll all be watching.

Will Russell Westbrook be seen limping around Houston on one leg with a Samurai sword, covered in blood and looking for Patrick Beverley's house?