Rutgers head basketball coach Mike Rice was fired on Wednesday for abusing his players, and based on interviews and Twitter reaction from NBA players, his in-your-face style isn't something that would go well in any level of basketball.

Perspectives on the tale of Mike Rice's firing at Rutgers because of verbal and physical abuse can vary. There's a fan perspective and a coach perspective. Within those two groups, there's different beliefs of teaching ideologies that fit somewhere between tough love and coddling.

There's also a perspective among players. In the NBA, the overlying belief is that Rice's antics wouldn't be tolerated. In fact, a number of NBA players said they'd retaliate in response to having such abuse put upon themselves or their children:

If my son played for Rutgers or a coach like that he would have some real explaining to do and I'm still gone whoop on him afterwards! C'mon

Man how is that Rutgers coach not fired already? If my son was on that team Id be on the first thing smoking to his soon to be vacant office

I would of snapped on the coach from Rutgers.... I would sit before I take some abuse from that man

Stephen Jackson had never heard of Mike Rice before today but says: "I would have knocked his ass out if he threw something at me."

But Rice's antics have brought up an institutional concern that was addressed by Miami Heat players Ray Allen and Shane Battier. 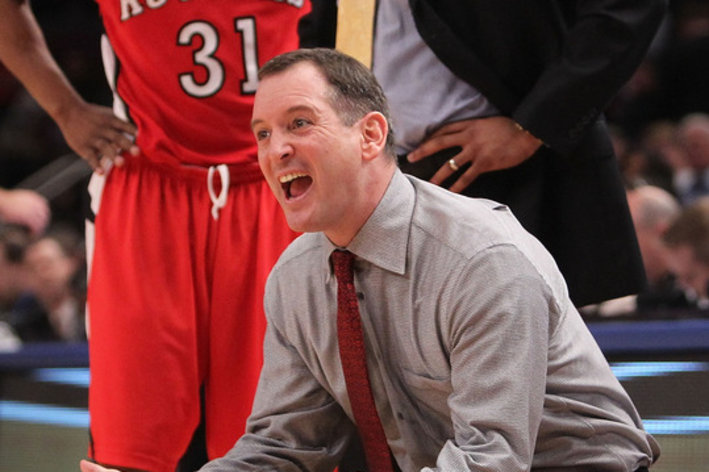 A Rutgers fan takes a look at the ugly ending of Mike Rice's tenure.

Allen is on the board of governors at his alma mater, UConn, so he has a good bit of reason to be upset. He told the Heat Index's Tom Haberstroh that he'd want to fight Rice, but that's Allen as a cagey NBA veteran speaking:

"You can ask anybody in our locker room that saw that video," Allen said, "they feel the same way, that if the ball came at me like that, I'd throw that right back at him. But we say that now, as professionals."

Where in the NBA players reign supreme and often have the power to force teams into dumping their head coaches, Battier points out that college athletes are "at the mercy" of a coach making six figures and holding the power to deny a transfer. As a parent, Allen added that the Rice investigation brings up a serious worry that parents send their students to play basketball under a coach's tutelage and instead spend years being abused.

The college athletes have no power.

And at a wider glance, the issue brings up what Battier called the "rules that govern society" against those that govern sports. His analogy called boxing out legal in basketball, but assault in a grocery line.

Nevertheless, Allen said that every Heat player in the locker room deemed Rice's abuse -- in a gray area of sports and society -- worthy of retaliation any way it's sliced.

• Ziller: Expansion is the only fair solution

• Can you dig it? Shaq's jersey retired