Tim Brando, Chris Broussard, and giving credit where credit is due

Tim Brando and Chris Broussard spoke out after Jason Collins came out on Monday. Spencer Hall gives out credit where it's due.

Share All sharing options for: Tim Brando, Chris Broussard, and giving credit where credit is due

I will give people credit for a lot of things on sight. If you have a neck tattoo, for instance, you have probably ceased caring about life and limb a long time ago, or at least want the rest of the world to think this. You may also be J.R. Smith, and if you are, you should probably get back to pursuing that lucrative pipe sponsorship just waiting for the picking.

I'll also give some automatic credit to this man: 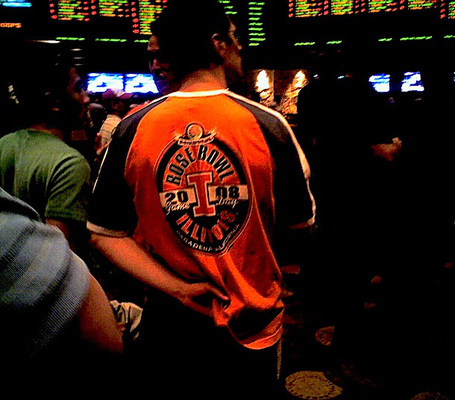 That is an Illinois Rose Bowl jersey, and it is being worn in a Vegas March Madness setting to advertise someone's deep and everlasting ardor for a team that lost 49-17 in bloody, lopsided fashion to USC in 2008. (Oh, poor, poor Juice Williams.) This person is dangerously insane and utterly admirable: admire his splendor in the wild, and maintain a healthy distance should he lunge for an arm or your throat.

That involves some degree of action. For whatever reason (a brain lesion, most likely), that person decided an Illinois Rose Bowl shirt was the appropriate garb for gambling on basketball. Yesterday, Jason Collins decided to come out as the first active gay NBA player. There's quite a bit of action in that: being gay can be quite difficult, particularly for a black athlete playing in a professional culture not noted for its tolerance of homosexuality. Collins is undoubtedly happier for it, and more importantly some terrified gay kid playing basketball somewhere probably feels several degrees better about his prospects for a happier life.

This is a net good. It harms no one, and takes one more Alan Turing scenario off the shelf of horrific possibilities. (That's Alan Turing, cryptanalyst, mathematician, war hero, and five-tool genius who killed himself after being prosecuted for homosexuality in Great Britain.) Jason Collins is a hero to someone in the positive, and deserves some amount of credit for his actions. Assign it as you will, bankers of virtue, but the dude is owed something for his effort, even if there's a memoir, film rights, talk show appearances, or whatever other semi-lucrative media deals may be attached to it.

That takes some degree of work, effort, and expenditure of life energy. Sports have an appeal because they involve a certain degree of parsimony: there is a score, and a result, and hierarchies appear naturally. The Charlotte Bobcats, bless their still very well-paid hearts, cannot demand respect for being merely "Charlotte" or "Bobcat." They are a basketball team, and a very bad one. For a few hours, results are earned, and an illusion of meritocracy reigns.

I'm an atheist. Let's get that out of the way here. I'm not an evangelical atheist. I am in the [null set] category of happy atheists, closer to the Douglas Adams absurdist club than the Richard Dawkins school of wandering into elementary schools, explaining that there is no Santa or God, and then tearing down the looped rings of red and green construction paper over the door. Being an atheist means I don't go to meetings, and don't care if you do. This country was founded by a lot of cantankerous people who disagreed on everything, and some of them desperately wanted the freedom to enjoy their hangovers on Sunday morning without the interference of what for me has always been at best a neverending lecture series on the same book, and perhaps some donuts afterwards.*

*Are you religious? Great! I hope it makes you very happy. I'm okay with this unless it affects public policy or when I can drink alcohol. Mostly the latter, to be honest. Also, donuts are very good, and you should enjoy them wherever and whenever you please.

This is one reason why one of the few remaining taboos for an athlete -- a public and unhedged atheism -- is not even remotely comparable to Collins' decision to be publicly gay. It is actually a choice, and also mostly because they don't have to: a huge portion of the population is Christian, or at least some kind of churchy, and atheism in one respect consists of not doing a lot of things rather than doing certain things. You bow your head to pray at the invocation, and I don't. I have cheered at prayers before, notably this one, the single greatest prayer in the history of human civilization. You thank the Lord in your postgame, and we'd probably follow Ron Artest by thanking our psychiatrist, and then reminding everyone of our upcoming single, "Champion."

So if Chris Broussard goes on ESPN and insists homosexuality is a sin, he is technically right: under the definitions of his particular brand of Christianity, it is a sin to be homosexual. If he is being completist, so are a whole other list of tired responses you can take from Leviticus and the "Beginner's Book of Strident Atheism," but this isn't a dorm room or r/atheism, and it is not 3 a.m. Sin isn't a relevant topic ever in sports unless we're talking about wearing a jersey as an adult male, and that falls under "Crimes against fashion and age" more than any religious code.

The relevant part is that Chris Broussard is responding to Jason Collins' proven, actual gesture of taking a small step toward changing the public definition of a happy, healthy gay man by citing his religion. In return, there is no counter-argument to be made. Our conversation is over before it ever started; you hit the ripcord, pulled the chute, and floated out of the argument on a cloud of faith. It's a terrible discussion, but it makes Chris Broussard feel better about himself, and that is evidently pretty important to Chris Broussard.

In contrast, a broadcaster for a major network reached for the parachute, pulled the cord, and had the cartoon sack full of camping gear fly out on descent.

.@callmeg_unit Simple Being a a Christian White male over 50 that's raised a family means nothing in today's culture. The sad truth. Period.

He is also, in a sense, completely right. In theory, that all means nothing in today's culture. It should have meant nothing 50 years ago, and 100 years ago. Those labels outside of the framework of an individual and their actions mean nothing.

That is one of the great levellers in sport: the triumph of experience over label, of evidence over myth. You can debate whether Joe Flacco is elite all day, but a large, shiny ring on his finger and his brilliant playoff stretch and three TD performance in the Super Bowl at least put him on a very short list at the moment. Ty Cobb was a reprehensible human being, but he was a great baseball player, and that shred of professional virtue can never be torn out of the woven horrormask of his being. Tim Tebow is one of the nicest human beings you will ever meet, and he will never, ever throw a football that does not look like pizza dough hurled from a kitchen into the dining room in anger. The Reverend Bill Parcells is right: you are what your record says you are, and the rest is mere flapping of the facecakes.

But sure, Tim: being over 50 means by some combination of luck, decent living, and non-stupid behavior, you made it to fifty years on this planet. Suck it, dude who died at 38 of stomach cancer! Scoreboard! Being Christian, as I've said elsewhere, describes attendance, not behavior, to the semi-objective reader. Being male means you have a penis; I'm very proud of Tim Brando for coming out as having a penis. This is bold, and will surely change lives.

As for raising a family: you elected to have one, and merely saying you raised one doesn't demonstrate anything indicative of innate virtue. (I can say I've fixed cars, but by no means does that indicate they weren't on fire several minutes later.)

The combination of all of them is correctly valued here, because this is America. I don't give you credit for any of them. I could give you credit for being a successful broadcaster for several decades: that's not easy to do, and to be honest when I really don't want to be, you happen to be pretty good at it. I could give you credit for being a much better fist-pound guy than I am, even with the animated chimpanzee coming out of my shirt. I have bumped fists with you Tim Brando, and you are so very, very good at it that I find myself feeling personally bad for how terrible I am at it. You were kind in an interview setting with me, even though I showed up hungover, unshaven, and probably smelling of fried food. (It was New Orleans. That will happen.)

That's a forgiving attitude, and a genuinely Christian thing to do. As for demanding credit for merely being you in response to a gay athlete, I honestly have no idea what you mean here. It looks like demanding some inordinate amount of respect for your opinions for the club you happened to be born in, or chose to enter with little to no effort on your part. There should be no guaranteed starting spots on the depth chart in our country. There certainly aren't for Jason Collins, who doesn't have a deal for next year, and will be running the hills with a 30 pound vest on in order to get one more precious year of an NBA income in the bank.

For someone out there, he is leading. Debate whether he's a hero or not in your world, but he's leading by example for a small subset of people who need examples, and doing so positively: with love, and work, and still more work. The two are ultimately indistinguishable when done right, and what they leave behind is the capacity to pass that work forward. I know what Jason Collins is doing, and has done, will be the work of life. I don't know what people like Broussard and Brando are doing. It might be leading, but it requires neither work nor love by any definition of either.

This is a story about giving credit where it is due. No one ever said it had to mean the good kind.