Carmelo Anthony has scored 90 points over the past two games against the Heat and Hawks. But even with Melo on another planet, his Knicks are still (probably) going nowhere.

For the past 48 hours, Carmelo Anthony's been about as perfect as any basketball player gets. He dropped 50 points on the shorthanded Heat Tuesday night, then followed that up with another lights-out performance against the Hawks on Wednesday (40 points on 17-of-27 from the field). God, it's fun to watch Carmelo when he gets like this. What he did to Shane Battier and Josh Smith the past two nights should be illegal.

When Carmelo's feeling it, there's not a more unstoppable scorer in the NBA. He makes it all look way too smooth and way too effortless. But the past two nights have been a little depressing too, so I have to vent for a second here.

The game against the Heat was especially bittersweet, because Melo was just so goddamn dominant. He didn't take a shot inside 15 feet, and it didn't matter. He spent the entire night humiliating Battier all over the court, scored more than half of the Knicks' points, and basically turned a forgettable night in Miami into one long answer to everyone who's ever questioned his credentials as a superstar. When Carmelo plays like THAT, everyone's efficiency arguments become irrelevant.

How LeBron shut down Melo 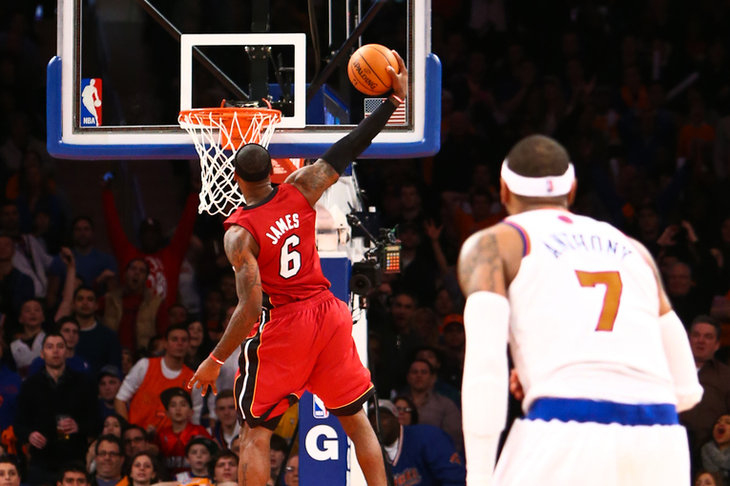 The problem is, I couldn't watch Carmelo do that to the Heat without noticing LeBron in a suit on the bench. It feels like every other time Carmelo's gone off against Miami, he's allowed to do it for a few quarters, and then LeBron switches onto him in crunch time, and suddenly ... nothing.

Never does LeBron look more unfair and ridiculous than when he's across from Carmelo, showing everyone just how much distance there is between "best" and "one of the best."

It happened in last year's playoffs, when Carmelo was unstoppable for the final month of the season and we all started whispering about the Knicks maybe possibly scaring the Heat in a seven-game series. Then the Heat series happened, an Carmelo averaged just 21 points and shot 34 percent over the first three games, all Knicks losses. He averaged 38 points in the last two games, but by then the series was over.

It happened the last time the Knicks played the Heat at full strength. Carmelo had 28 points through three quarters as the Knicks blitzed the Heat. But in the fourth quarter, with the Heat making a run, the defense swarmed and Melo only took four shots as the game slipped away.

All of which is to say, when he's on, it's borderline beautiful to watch Carmelo render entire defenses helpless. I just want it to happen in games that mean something.

That was the nagging thought that keeps popping up this week. He's not LeBron James, he can't do this against LeBron James (at least over seven games), and that sort of means he's doomed to come up short when it counts. That's what was depressing.

A player as good as Carmelo should win when it counts. It's why watching Dirk Nowitzki finally win a title was so much fun in 2011. Dirk had been quietly unbelievable for a decade, playing in the shadow of the Spurs and Lakers and even those Suns teams, coming up short in the playoffs every year for one reason or another. But he was great enough that it seemed wrong to not have a title on his resume somewhere.

I don't know if Carmelo's quite that great, but the past few days have been a reminder that sometimes he's worlds better than he ever gets credit for.

Yes: It's a horribly immature, stupid sports-fan tic to think that every superstar needs a title to validate their greatness. But there's no point being a sports fan if you can't be horribly immature and stupid sometimes. I can't help it. The 11-year-old sports fan in me wants Carmelo to get a ring so that everyone can appreciate Melo's game as much as me.

It's not happening this year, though. And looking at the rest of the league next to a Knicks roster full of aging stars and bad contracts for the next few years, it may not happen for a while. Or ever, because eventually Carmelo's going to get old, too.

So in honor of Carmelo's batshit insane performances the past two nights, here's to hoping Carmelo and the Knicks break through one of these years. This is an irrational dream for several reasons, yes. First because we should never, ever count on the Knicks to succeed at anything.

Second, because there's no reason to think Carmelo will suddenly overtake LeBron in the East over the next few years, or that he'll suddenly develop an all-around game that carries the Knicks even on the nights when he's not completely out of his mind as a scorer. There are good reasons to bet against Melo ever winning a title.

But that's the cool thing about being a horribly immature sports fan. Sometimes things break just right, everything falls into place, and stupid, stubborn hope gets rewarded.

Just look at Carmelo. He's spent the past three years having his game dissected by a hundred different smart writers explaining all the reasons he will never be a truly elite superstar. There are good arguments there, numbers to back them up, and Knicks failures to underscore everything. But none of it matters this week. There's nothing rational about Carmelo and what he's doing for the Knicks right now, and the entire basketball world can't help but sit back and appreciate his game. Isn't it awesome when that happens?