The Detroit Pistons have two young building blocks in Greg Monroe and Andre Drummond. Now, it's time for Joe Dumars to begin building a team around them.

Share All sharing options for: The Detroit Pistons' defining summer has already begun

BOSTON -- In every rebuilding project, there comes a point when it's time to make a decision. It happens when the bad contracts and bloated weight of faded glories have been cleared from the books, and the bright, shining promise of cap space appears on the horizon like a rainbow emerging through the mist. When it comes into focus after years of struggle and mind-numbing anonymity, it's almost impossible to resist.

Yet it may as well be surrounded by unicorns for all the good it does. How many good teams have been built through free agency? The Heat, obviously, who are the exception to every rule. The Knicks, kind of, although it's worth remembering their most important player was acquired via a trade featuring young players and draft picks. Free agency has its uses, but with the exception of franchise players, it's rarely a panacea to the slow, grinding work of roster rebuilding.

Why yes, we are talking about the Detroit Pistons who succumbed to free agency's siren song a few years ago, only to crash upon its rocky shores. They have a chance to revamp themselves again this offseason, but realistically, their future is tied to the development of two players who are already on their roster: Greg Monroe and Andre Drummond.

Still just 22 years old, Monroe is a smooth, skilled offensive player. He can score, rebound and pass with a deft touch. Drummond is an unholy terror on the offensive glass and a potential game-changer on the defensive backline. He's all kinetic energy and athleticism at this point, but that makes up for his rawer, less refined skills. The question -- and at this point, it's purely a philosophical question -- is whether the two of them can play together in the frontcourt.

"Anyone can fit," Pistons coach Lawrence Frank said before they took on the Celtics on Wednesday. "To me, it's making different sacrifices and concessions to make it work. Greg's a very talented offensive player that has a great skillset. There aren't many guys that can score, dribble and handle at his size. Andre obviously brings the athleticism that we lack and rim protection and a finisher at the rim. They definitely can play off each other. The more they continue to improve their games the better they'll be together."

"Sometimes, combinations don't work because guys just don't want to make it work," Frank continued. "A lot of times you see it at the two and the three, when you have two wing scorers who both feel like they have to have the ball at times, pettiness gets involved. These guys are both very unselfish guys, so it definitely will work."

Monroe and Drummond have played about 300 minutes together this season, per NBA.com. That's not nearly enough time to get an accurate gauge of anything. The numbers are relatively uninspiring, but defensively they've only allowed 102.5 points per 100 possessions and are killing teams on the boards.

Since Drummond returned from a back injury that cost the rookie 22 games, Frank has started him alongside Monroe. In an otherwise lost campaign, the Drummond-Monroe dynamic is easily the most important development of the season. In order to make it work, Monroe will have to make the transition to the four spot.

"I never pigeonhole myself," Monroe said. "I don't think they would put me in the position if they didn't feel like I was comfortable in it, and I wouldn't want to be in the position where I'm not comfortable. I'm perfectly fine. I don't have a preference though. I understood the plan from jump. I don't have a problem with it. I'm pretty sure I'll still be playing five a lot when he's out of the game. It's different, but I don't think my position is going to change that much."

Monroe has attempted 151 mid-to-long-range jumpers this season, almost twice as many as he took last season. He's shooting just 33 percent from that distance, and that helps explain why his field goal percentage has dropped from over 52 to under 48 percent this season. Yet save for an an encouraging uptick in his assist percentage, his numbers have been otherwise unchanged, suggesting this is all part of the learning curve.

Before Detroit's game with Boston, Monroe was out on the court working with big-man coach Roy Rogers on the shot. Rather than sit on the perimeter and pop stationary jumpers, Monroe ran into each shot as if trailing in transition.

The bigger adjustment is on the defensive end, where Monroe will have to check the jump-shooting bigs who dominate the position.

"The rotations are a little bit different for the four man, especially when you're playing guys who are stretch fours," Monroe said. "That's one adjustment that is one of the bigger ones I have in playing the four. It's more habit, breaking that muscle memory."

Drummond is in an entirely different stage of his development. He's taken 300 shots this season and 263 of them have come from inside the restricted area, per nba.com. He's a beast on the boards, where his offensive rebounding percentage puts him in elite company with players like Anderson Varejao and Reggie Evans. Defensively, he has all the raw tools if not the subtle nuances that will take time to learn.

"He's going to be a force defensively. From the start, you could see it," Celtics coach Doc Rivers said. "He's got offensive stuff he has to work on, but with his size, his athleticism, he has a chance to be a pretty good center in our league. He's going to be a defensive player for sure, and we know that. I think the other parts hopefully will come for him."

For all they have to do and all they have to develop, Monroe and Drummond provide something that has rarely existed in Detroit the past few years: hope. Just imagine the possibilities of two young big men coming into their own on the same team with cap space to afford both for the long haul. No other rebuilding team has that kind of dynamic. 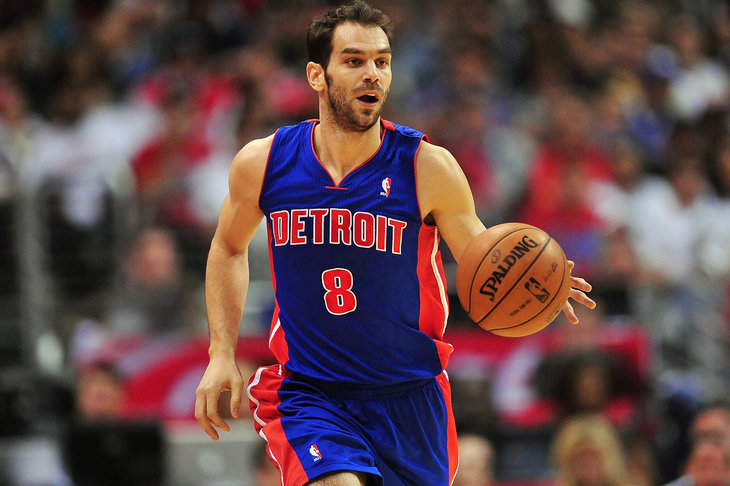 James Herbert on Jose Calderon's first game back in Toronto.

The Pistons have won 25 games, which is exactly as many as they won last year and a few less than they won the year before that and the year before that. The last time they were even mediocre was 2008-09, when their aging core -- minus Chauncey Billups -- went to the playoffs with a 39-43 record and got swept by the Cavaliers.

Jason Maxiell, Rodney Stuckey and Will Bynum are the only players left from that 09 squad, and that represents progress of a sort. Tayshaun Prince was the last remaining link to the glory days of the mid-aughts and he was dealt at the deadline for Jose Calderon, whose contract expires at the end of the season.

Team president Joe Dumars initially spent the interim years trying to quickly build his team back up via pricey free agent acquisitions like Ben Gordon and Charlie Villaneuva. When the quick-fix remedy proved incapable, Dumars went to work on an alternate route featuring young drafted players like Brandon Knight, Jonas Jerebko and Kyle Singler in addition to Monroe and Drummond.

Dumars has maneuvered the Pistons into having more than $20 million in cap space after this season, but its come at a heavy price. Trading Gordon for Corey Maggette's expiring deal cost a future first round pick to the Bobcats that's lottery protected this year and top-8 protected in 2014. Still, after four years of uninspired performances offering middling returns, the Pistons appear ready to rejoin the living.

But now comes the tricky part.

This is not a deep class for free agents. Dwight Howard and Chris Paul are the headliners, but there's no realistic chance either one would even consider Detroit's cap space. Josh Smith is probably the next-best player, but adding the combustible Smith to the mix sounds like a disaster waiting to happen. The Pistons need defense and shooting, and there are some intriguing options like O.J. Mayo, J.J. Redick, Tony Allen and Andre Iguodala, if he chooses to opt out.

Calderon will be also a free agent. Since arriving from Toronto, he's been the consummate clever point guard, averaging 12 points and almost seven assists while shooting well over 50 percent. Dumars is on record as saying he wants Calderon back, which would likely slide Knight into a sixth-man, scoring-guard role.

Monroe is eligible for an extension, but in an interesting twist, agent David Falk told ace scribe Vincent Goodwill of the Detroit News in March that he wasn't expecting to talk extension in the offseason. Here's the money quote:

"When I evaluate things, with a player of Greg's stature: Take the money out of the equation. I can get it from five different teams. 'Are there players I want to play with? A coach I want to play for? A city I want to live in?' My job is to make the money as insignificant as possible (relatively)."

In other words, Falk wants to see where Dumars takes the team in the offseason. Just like everyone else. If Dumars makes a big plunge in free agency, it would be the kind of move rebuilding teams make when they think their young core is ready to compete for real. Of course, there's no real evidence that they are.

Their defense has ranked in the lower third for years, and their offense hasn't been much better. Even their 25 wins are a bit deceptive, as nine of them have come against Washington, Cleveland and Charlotte. Against the Western Conference, the Pistons are 4-25.

"We have to find our way of winning and be consistent with it."-Greg Monroe

As the Pistons head into the offseason, that's the most important consideration for Dumars. Who are they? What are they all about? Drummond's play has changed the equation and set in motion a fundamental shift, and this summer may help define it.