Holy cow, the Lakers really might not make the playoffs

A little more than a month ago, it looked like the Lakers had figured it out. With the Jazz crumbling, L.A. took control of the No. 8 seed in the West. And now, 10 days out, it really looks like the Lakers might not make it. This is amazing.

It's actually happening. The L.A. Lakers might actually miss the playoffs. It all seemed like a surreal dream through November, December, January and February. It seemed like a mirage that was being yanked from our grasp in March. But we're 10 days from the end of the regular season, with five games left, and the Lakers really might miss the postseason.

After Sunday's action -- a blow-out loss for the Lakers against the Clippers, a win by the Jazz -- L.A. now trails Utah by a half-game for the No. 8 seed. Utah retains the tiebreaker owing to a 2-1 season series victory. The Jazz have four games left: home matches against the Thunder and Wolves, then road games against the Wolves and Grizzlies, with no back-to-backs. That Grizzlies game comes on the final day of the season; we won't know until next week whether Memphis has reason to play to win.

The Lakers have five left. And they need help. They need to win two more remaining games than Utah does. So if Utah goes 3-1, L.A. needs to go 5-0 to make the postseason. If Utah goes 2-2, the Lakers need to go at least 4-1. The Lakers have the Hornets at home on Tuesday, visit the Blazers on Wednesday, get the Warriors at home on Friday, the Spurs at home on Sunday and finish on Wednesday with a visit from the Rockets. Again, we won't know if Houston will be playing to win -- there's a chance they could have an opportunity to take the No. 6 seed away from Golden State, which means avoiding the Spurs and Thunder in the first round. Similarly, we can't predict what lineup Gregg Popovich will toss out on Sunday. But keep in mind that a Spurs win then could all but eliminate the Lakers and set up a San Antonio-Utah first-round match-up. In a way, the Spurs can help choose their opponent (provided they don't fall behind the Thunder for No. 1 before then).

Full disclosure: I am a Laker hater. As a Sacramento Kings fan, it's in my blood. Before the season began, back when it looked like Kobe Bryant would compete for his sixth championship ring after L.A. picked up Dwight Howard and Steve Nash, I gave you 50 reasons to hate the Lakers. Since it became apparent in December that the Lakers' struggles this season might not quietly go away, I have -- like many of my internet brethren -- reveled in that struggle. I think Reason No. 11 explains why:

11. Lakers fans will claim they know pain. They will act bothered after a loss, and will be apoplectic if eliminated in the playoffs. Yet the Lakers have made the playoffs in 47 of 51 seasons since moving to Los Angeles. This is akin to Paul Allen complaining that his canoe has sprung a leak.

There's a second piece to the lack of sympathy, and that's the bug in the back of my mind that the struggles would not be so much as to keep the Lakers out of their 48th postseason. We always expected that at some point L.A. would turn it around enough to grab the No. 8 or better and ... well, sacrifice themselves at the altar of excellence. And for a while it looked like that fear would come true, as this chart shows. 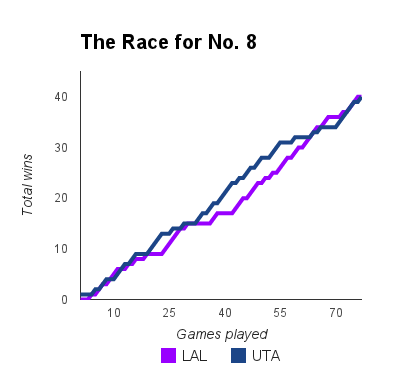 Now, it's pretty close to a toss-up, though Utah has the advantage of needing to do less. I don't think L.A. can win out -- the Warriors have some huge wins on the road and have been playing well of late, the Rockets could be motivated and Pop just might try to M.F. the Lakers (by not resting everyone). This could actually happen, people. The Lakers could actually really possibly miss the playoffs with a Rolls Royce roster and a U.S. Treasury payroll. This is really happening.