In college basketball's title game on Monday, Michigan's Trey Burke and Louisville's Gorgui Dieng showed why they will be safe picks in the NBA draft in June.

In a game that lived up to all the hype, Louisville won Rick Pitino's second national title with a thrilling 82-76 victory over Michigan. There were a number of NBA-caliber matchups on the floor, which was part of what made the game so intriguing. Even players in high-level conferences like the Big East and the Big Ten don't see other NBA prospects at their position all that often during the season. On Monday night, almost all of the Wolverines and Cardinals best players were tested on both sides of the floor. Some passed the test, but others came up a bit short.

The importance of individual matchups can't be overemphasized when it comes to evaluating players. In the Wolverines' win over Syracuse, Mitch McGary looked like a superstar, dissecting the 2-3 zone from the high post and using his bulk to push around the Orange's long and lean big men. Against Louisville, he ran into a reality check in the form of Gorgui Dieng, one of the only NBA-caliber centers in the college game. McGary didn't play that poorly, with six points and six boards, but he had a hard time impacting the game on either end of the floor against a big man who was taller, faster and longer than him. In the NBA, they're all going to be like that.

That's what makes evaluating college big men so difficult. They don't face NBA-caliber defensive players at the 4 and 5 very often. Last season, one of the biggest reasons why I was so down on Thomas Robinson was his struggles against Anthony Davis and Terrence Jones in two losses to Kentucky. As it turns out, that meant more than his ability to dominate teams like Missouri, who didn't have one scholarship player above 6'9.

McGary, at 6'10 and 250 pounds, isn't big enough to deal with centers like Dieng and he isn't quick enough to deal with the new breed of small-ball power forwards. He'll turn 21 in a few months, so it's unclear how much higher his ceiling is. He should have a long NBA career as a productive third big man off the bench, but the days of "Magic Mitch" and his super cool unicycle have come and gone.

The rise of Gorgui Dieng 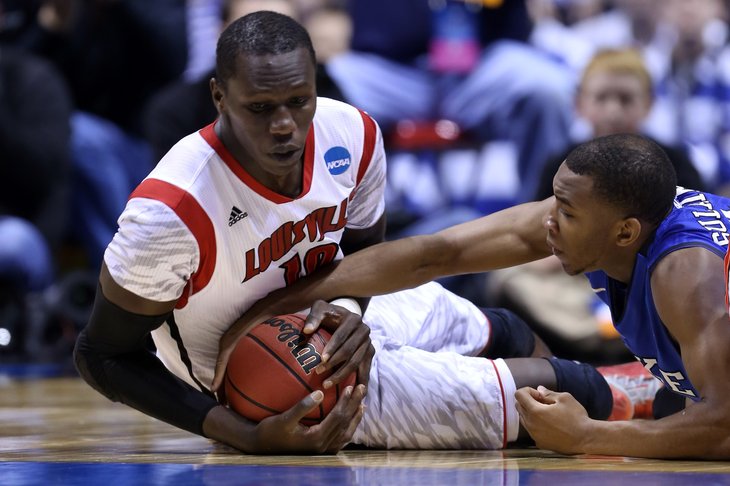 And while McGary struggled, Dieng showed why he may be one of the most underrated prospects in the country. He controlled the paint, effectively eliminating McGary as an offensive threat, and protected the rim, blocking three shots. On offense, he smoothly knocked down mid-range jumpers and picked apart the Michigan defense to the tune of six assists. With his size, skill and athleticism, he'll be a serviceable two-way center on a rookie contract. In a league where guys like DeAndre Jordan make more than $10 million, that's great value.

The play of Chane Behanan was one of the keys to this game. Michigan had no one who could keep the 6'6, 250-pound Behanan off the glass, as he finished with seven offensive rebounds. However, that doesn't tell us all that much about Behanan, who doesn't appear to have an obvious position at the next level. There will be guys a lot bigger than Glenn Robinson III trying to keep him off the glass in the NBA. However, he's exactly the type of undersized power forward (Tony Gonzalez, Antonio Gates, Jimmy Graham) whose found success as an NFL tight end.

Losing the Behanan matchup won't be held much against Robinson, who will be a shooting guard, not a power forward, in the NBA. He was his typical efficient self on Monday, with 12 points on 3-for-4 shooting, along with two assists and two rebounds. At 6'6, 210 pounds, Robinson has ideal size for the position and the ability to shoot from deep and the athleticism to play above the rim. The question is whether he can be more than a complementary player, which will give him a tough decision over the next few weeks. He'll be a first-round pick this year, but he might be a lot higher if he comes back.

It was a more of a mixed bag for Tim Hardaway Jr., Michigan's other NBA prospect on the perimeter with great bloodlines. On one hand, his NBA-caliber size and athleticism at 6'6, 205 pounds allowed him to easily break the Louisville press as well as finish over Dieng for a spectacular dunk in the second half. On the other, his shot selection was fairly erratic and he tended to over-dribble, finishing with 12 points on 5-for-13 shooting. His best chance to stick in the NBA is as a "3-and-D" shooting guard, the most replaceable position in the league.

If Monday made one thing clear, it's this: Russ Smith is not a point guard. Smith went 3-for-16 from the floor and had three turnovers; he just can't be trusted to be a team's primary decision-maker. That's an issue for a 6'1, 165-pound guard who can't shoot the ball. There wasn't much he could do to bother Hardaway and that's the type of size he'll have to deal with playing off the ball at the next level. Does Smith have an informed opinion on the Euro and the Cyprus bailout? It might have a big effect on his professional future.

Trey Burke was dialed in for most of the night, which is why many will wonder whether Jim Beilein should have put him back in the first half after he picked up two fouls. Burke is going to be one of the safer picks in the lottery. He's the rare young point guard with a great feel for the game and no holes on the offensive end of the floor. However, at only 6-foot, 190 pounds there will always be questions about his ceiling in the NBA. Chris Paul has become an MVP candidate at that size, but he's a one-in-a-million player.

Is Burke good enough to pass up on two super-sized point guards in Marcus Smart (6'4, 225 pounds) and Michael Carter-Williams (6'6,185 pounds)? It's the question every point-guard-needing team in the lottery will be trying to figure out over the next two months.

• The Knicks have rediscovered themselves