The Grizzlies are back from the dead

Zach Randolph and the Memphis Grizzlies were counted out a week ago. Three wins later, they're back and looking better than ever.

Share All sharing options for: The Grizzlies are back from the dead

A week ago, we were talking about the Los Angeles Clippers as Western Conference contenders, L.A. was up 2-0 on the Memphis Grizzlies, and in a dead-even series, Memphis had to win four out of five games to secure things. A week later, the Grizz have won three straight and everything we said a week ago looks ridiculous.

Were the Grizzlies ever really "dead"? No, definitely not. But the comeback is still insane.

There's already been plenty of criticism of how the Clippers have played through all this -- including Tom Ziller's piece earlier today -- and after stupidly counting out the Grizzlies last week, we're not about to declare the Clips D.O.A. today. But still, while everyone's poking holes in the Clippers, we need to talk about just how impressive the Grizzlies have been. Especially in Games 4 and 5, the Clippers didn't lose so much as the Grizzlies overpowered them and won.

It starts with Zach Randolph. Another Zach called this weeks ago -- as Grantland's Zach Lowe wrote at the beginning of April, the Grizzlies are only a serious contender if Z-Bo is hitting on all cylinders. It makes sense. For a team whose offense has always been their biggest question mark, their best offensive player was a question mark for most of the season. This was potentially problematic.

When Z-Bo started the Clippers series playing 28 minutes a game and averaging 13 points and six rebounds, it looked like this was the Z-Bo Memphis was stuck with. The aging, watered-down version of what he was two years ago. Maybe one or two steps away from becoming Zach Randolph's Expiring Contract somewhere down the line. It was depressing and a big reason it looked like Memphis was doomed after the first two games.

Since then? Z-Bo has played almost 40 minutes a night in three wins, averaging 25 and 10 and beating the crap out of anyone the Clippers throw at him. In other words...

I don't know why we embedded an Eightball and MJG song there. It just felt right.

But yes: The Grizzlies really are a different team when Z-Bo is hitting like this. The combination of him battering people down low for easy layups and then mixing in just enough stepback jumpers to look completely unstoppable ... that's what the Grizzlies offense needs to be taken seriously in the West.

On the other side of the ball, the Grizzlies have been flawless the past few nights in grinding the Clippers offense to a halt. Everything that clicked for L.A. in the first two games has turned into a mess of contested threes and bobbled entry passes, and the only option the Clippers have is to give the ball to Chris Paul and ask him to do something crazy. (Not a bad option. But still.)

You can have your hero ball, Clippers 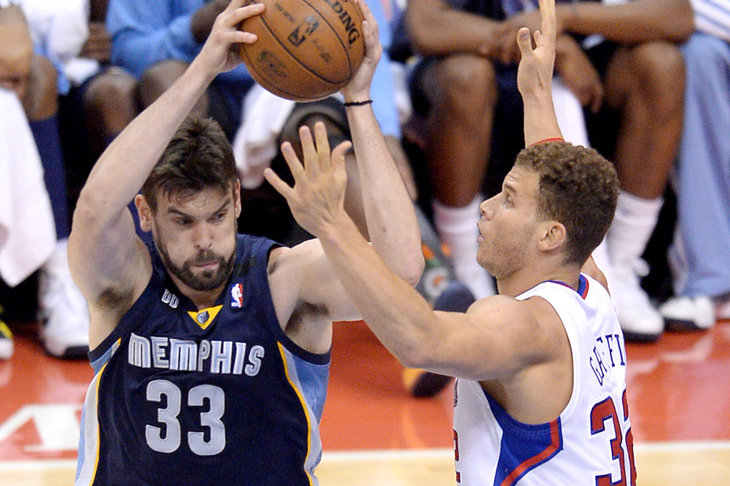 The Grizzlies bench has come up huge across the board, with guys like Jerryd Bayless, Quincy Pondexter and Darrell Arthur contributing meaningful minutes. Tayshaun Prince is providing exactly the sort of perimeter shooting were hoping for when they took a chance on him in the Rudy Gay deal. Meanwhile, Tony Allen continues to do Tony Allen things, harassing L.A.'s perimeter guys and coming up with more loose balls than seems possible. Marc Gasol has abused the Clippers front line with his passing and scoring and continues to anchor the defense.

And then there's Mike Conley. Next to Z-Bo, Conley has always been the other giant question mark with Memphis. What we've seen throughout the final two months of the season and then this Clippers series should make the rest of the West pretty terrified. Conley's scoring, running the team, making plays on defense and has quietly blossomed into a weapon that's as dangerous as anyone else on the roster.

It's kind of like how Rajon Rondo was considered the weak link for the Celtics his first few years, and then one day we looked up and said, "Oh s***! When did Rondo get this good?"

He's not Rondo, but he's better than anyone realized. With Rudy Gay in Toronto, he's given Memphis everything they needed and more.

For the record: Most of this was also true for the first two games. Memphis was getting solid help from the role players, playing good D, Gasol was playing well, and Conley was exceeding expectations. But the Clippers were better. The biggest change is Zach Randolph, aka Z-BO, aka Everyone's Favorite MTV Cribs episode, aka Unstoppable Gummy Bear power forward.

Z-Bo's the linchpin that puts everything else over the top. And this is typically where we would look ahead and start wondering whether the Grizzlies could take down the wounded Thunder and then the Spurs and wind up winning the West and maybe even scaring Miami, but ... We won't make the same mistake as last week and jinx any of this.

For now, it's just great to have Z-Bo back to his old self, making defenses look ridiculous and living out all the spiritual principles of the Grit And Grind movement.

We'll wait to see if they finish off L.A. before we wonder about the next few weeks.

In the meantime, let's just say this: I was pretty shameless about jumping on the Clippers bandwagon last week, but if Playoff Chris Paul and the Clippers have to die so that Z-Bo and the Grizzlies can live and prosper and slowly turn the NBA Playoffs into a real-life Mario Kart Battle Royale, I'm definitely OK with that. Aren't we all?

• Film review: Were the Nuggets dirty?