What was the key to the Pacers' stifling defense in Game 3 against the Knicks? A perfectly-executed philosophy that cut off the 3-point line and was enhanced by standout individual defensive performances.

Share All sharing options for: The Pacers' near-perfect defensive performance

The Indiana Pacers' defensive performance in Saturday's 82-71 Game 3 victory over the New York Knicks was the closest thing to perfect that I've seen all year. Indiana committed a couple breakdowns in Game 2 that allowed the Knicks to tie the series, but those weren't present on Saturday. Not only did New York score just 71 points, but they did so while attempting only three "open" jump shots, according to MySynergySports.com.

In other words: the Pacers are preventing the Knicks from using their biggest weapon and lessening its impact at the same time. How have the Pacers been able to do this?

There's a lot going on, but the biggest reason is that they're able to defend the Knicks' two most common actions without sending more help.

Teams defend plays with five guys now, but that doesn't mean the age-old concept of stopping your man by yourself is out of practice. Every play in basketball is all about creating an advantage. If a team can get to a situation where they have four offensive players on three defenders, or three players on two defenders, etc., it's a win for the offense. But if a defense can shut off a primary play while playing with an even number of defenders -- one man guarding an isolation, two men guarding a pick-and-roll -- it prevents the offense from creating that advantage.

Take a look at the coverage on this Anthony isolation in the low post. As the ball is dumped into the post, the Pacers send no help. Unlike Boston, they don't even really set up a weak-side zone, choosing instead to watch the ball while still staying with their men:

As Anthony goes to the baseline, the Pacers will sort of send help with David West, but it's not really help. Rather than come to double off Iman Shumpert, West will stunt (or, "one-swipe") toward Anthony and immediately scurry back to Shumpert. West is simply hoping to cause Anthony to hesitate for a second: 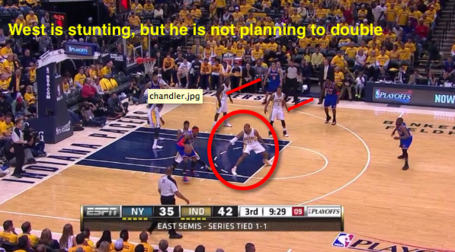 (Sorry for the stray file name in that screenshot. I couldn't figure out how to make it go away).

Otherwise, though, George is on his own. It says a lot about George's defensive abilities and the Pacers' trust in him that he's tasked with slowing Anthony by himself. In the end, he does his job, forcing Anthony to take this shot: 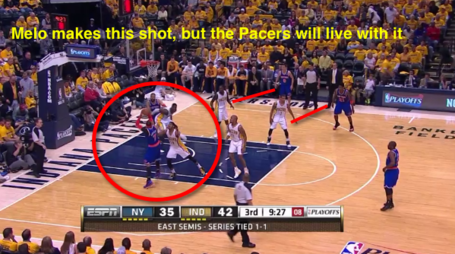 That the shot went in is of little concern to the Pacers. They'll live with that kind of shot, even if it's Anthony. That's better than having the Knicks attempt an open three. Here's the play in real time:

Here's another example of George forcing Anthony into a tough shot, this time in the pick-and-roll. As the play begins, the Pacers are locked into the three Knicks' perimeter shooters: 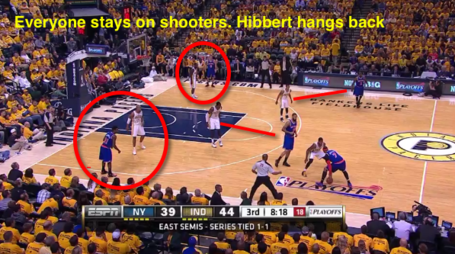 Anthony will do his best to rub George off the screen by Tyson Chandler, but George does yeoman's work fighting through it. This effort is essential to the Pacers' defensive coverage because it allows the Knicks to contain Anthony's penetration without having to use any of their three other defenders to help: 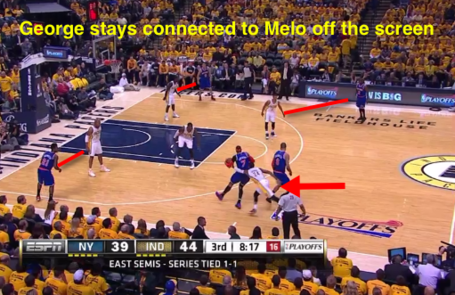 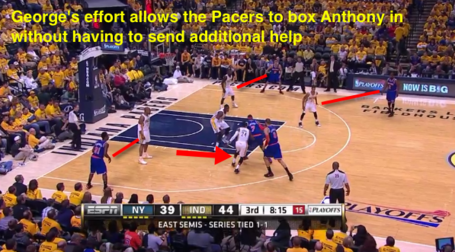 In the end, Anthony's only play is to take a mid-range jumper. He makes the shot, but again, the Pacers will live with it: 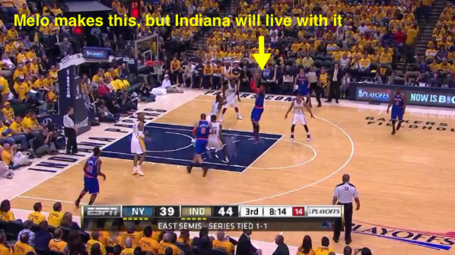 The Pacers' coverages on Felton and the other Knicks' ball-handlers was equally superb. Their coverage plan prevents the Knicks' guards from creating an advantage, forcing New York to launch difficult shots.

Here's another example of a shot the Knicks hit that the Pacers will take. Felton and Kenyon Martin will run a high pick-and-roll, but George Hill fights through Martin's screen to lock and trail Felton, boxing him in to the same spot in the middle of the floor as Anthony was caught navigating: 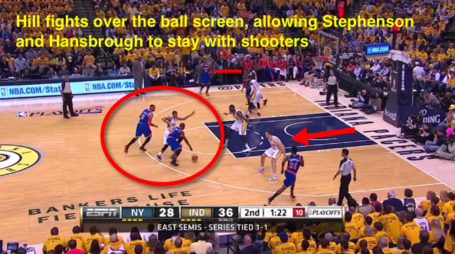 Felton eventually finds a small lane to swing the ball to J.R. Smith, but Lance Stephenson is in perfect position to close out. Smith has no chance to take a 3-pointer here, and that's because Stephenson hasn't had to stray too far off him to help on the initial high pick-and-roll: 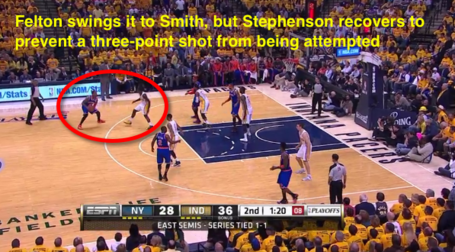 With eight on the shot clock, Smith has no choice but to go one-on-one. This is the shot he ends up getting: 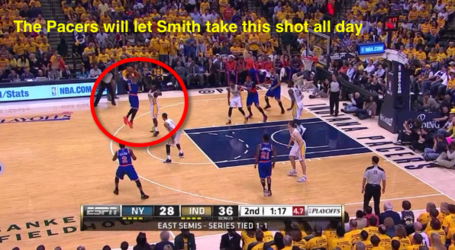 Smith makes it, but he won't often. The Pacers will let Smith try to do that all game, and generally, he will fail. Here is the play in real time:

The same Pacers coverage occurred when Smith was the ball-handler. Hill again fights over the top of the screen, and West again stunts to plug the lane: 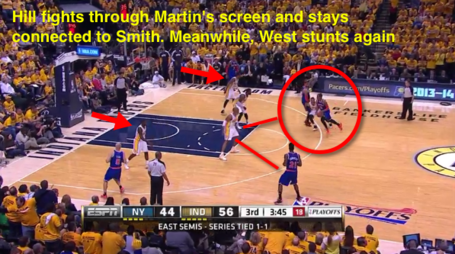 The other two Pacers stay on their shooters. Meanwhile, West's action is perfect because he still is on balance enough to close out to his man, Iman Shumpert. His stunt forces Smith to give it up, and he still is able to prevent Shumpert from getting an open three: 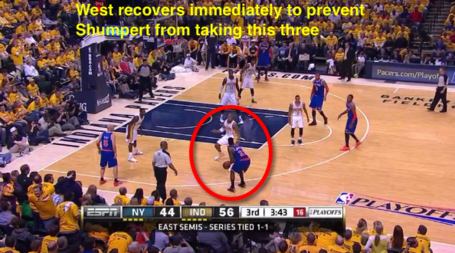 The Knicks are forced to reset into another Smith pick-and-roll. This time, Hill ducks under the screen and immediately recovers to prevent Smith from driving. The three Pacers guarding shooters are able to stay at home, and Smith's only play is a difficult mid-range jumper that misses: 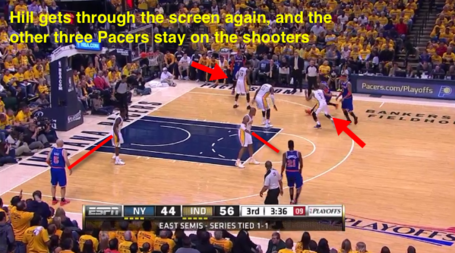 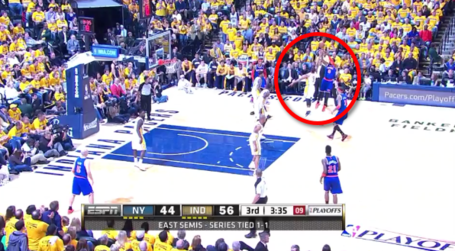 Finally, the Pacers were sure to stay on shooters even if Felton got some separation from his initial defender. Here, he runs D.J. Augustin into a Chandler screen, but can't create a good look because Hibbert angles him off. The other three Pacers stay where they are, even though Felton is dangerous attacking the rim: 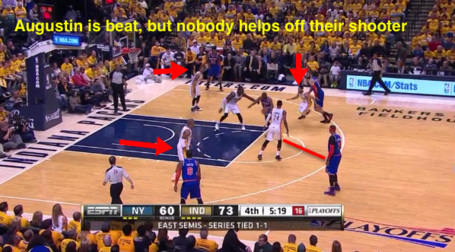 With nowhere to go, Felton throws it out to Smith, but this does little. West is in position to close out, and George has stayed with Anthony to the point where Smith can't easily swing the ball. Hill does help off his man in the opposite corner to prevent a lob to Chandler, but only after Felton passes the ball out. There's no conceivable way for the Knicks to find Hill's man, so the rotation is fine: 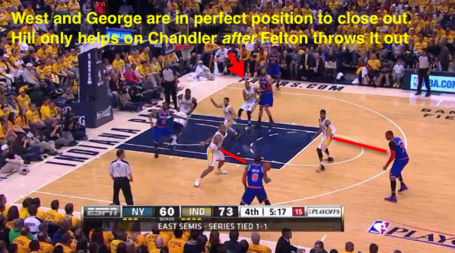 The Knicks' offense stagnates as Indiana recovers, and this is the shot they end up getting: 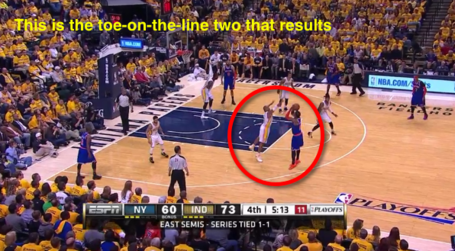 As you'd expect, this shot didn't go in. Here's the play in real time:

These are just a few examples of what the Pacers were able to do to the Knicks all game. It was an impressive defensive effort, and the Knicks are going to struggle to figure out a way to counter it. New York's play distribution was fine, as was their weak-side motion. Some Knicks fans wanted to see Mike Woodson play Chris Copeland more in small lineups, but that wouldn't have mattered much because, as you see above, Indiana wasn't straying off shooters anyway. Any improvement would have been marginal and mitigated on the other end: 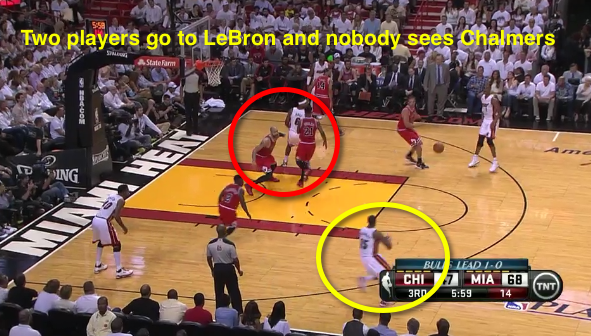 Mike Prada breaks down NBA plays in this ongoing series.

No, the Pacers just rose to the challenge with an incredible defensive effort. Much of the credit has gone to Hibbert's ability to take up space, and it's deserved. But for this strategy to work, the primary defenders need to continue to fight through ball screens and contest isolations as they did in Game 3. Hibbert was helpful, but the work of Hill and George was the key to the performance. Were it not for their pressure at the point of attack, the Knicks could have exploited some openings.

It's a firm reminder that great individual perimeter defenders are still worth their weight in gold. Their value may need to be measured in terms of their team's defensive scheme, but that's different than suggesting you can plug in any four guys around a great defensive center and succeed. The Pacers are stifling the Knicks because their individual defenders do enough work to ensure that they don't need to send an extra defender to stop the initial play.

As long as they do that, the Knicks will continue to struggle to generating 3-point looks.

• Tony Parker: 'They always forgot about me'

• What does Philly's new GM mean for Bynum?

• Can Kevin Durant do more?

• Damian Lillard was more than ready for NBA

• Why Len is a better prospect than Noel