J.R. Smith had a dream

Share All sharing options for: J.R. Smith had a dream

J.R. Smith has had one helluva weird season. He won the Sixth Man of the Year award ... and now he's shooting the Knicks right out of the postseason. After Tuesday night's disaster in Indianapolis, Smith is 18-64 in the second round. 28 percent.

But he's not letting the misses cut into his confidence. On Tuesday, Smith used 38 percent of the Knicks' possessions while on the court. That came out to 26 possessions (shots and turnovers) in 31 minutes. That's crazy! (Carmelo Anthony used 28 in 40 minutes.)

Posting and Toasting: Everyone on the Knicks choked

Smith's trigger finger has been getting looser as the season has gone on. Excepting an explosion over a few games early in the season, Smith is now shooting more than he has all year. His efficiency indicates that he should probably consider dialing it back significantly. 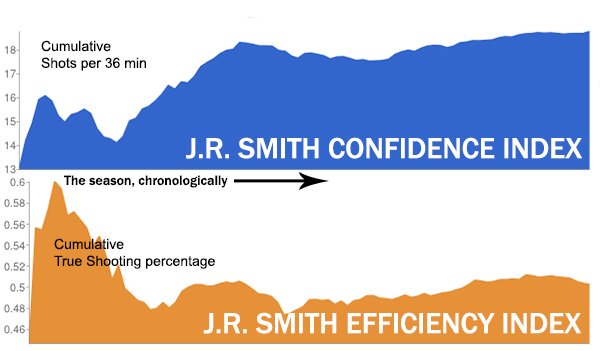 Each point along the way shows Smith's shots per 36 minutes, or True Shooting percentage, for the season to date. Smith is now at his highest point of the season for shooting frequency. The same cannot be said for his shooting efficiency, though he's also not the worst he's been all year. (He had a couple of rough troughs, the latest of which corresponded with that incredible spike in frequency. That lag between increased efficiency and increased frequency is pretty hilarious.)

Shot creation is valuable at some level, but it's hard to make the case that Smith is creating value for the Knicks by firing up shot after shot. On the one hand, previous Knicks playoff teams really could have used a J.R. -- let us not forget Jared Jeffries' crunch time possessions. On the other, Smith's efficiency is bad and worsening, and he's increasing his already spectacularly high shooting frequency. It makes no sense.

To us, that is. It makes perfect sense to J.R. Smith.

• The Bulls were historically unenjoyable

• Dan on Fire: Did Kobe fake his injury?

• How hurt is Dwyane Wade?