After seeing their season end earlier than expected, where do the Oklahoma City Thunder go from here?

The Oklahoma City Thunder will be fine. Kevin Durant, Russell Westbrook and Serge Ibaka are all young and signed to long-term extensions. The only major free agent decision to make involves veteran guard Kevin Martin, and there's young talent in the pipeline, from the emerging Reggie Jackson to the talented but unproven Perry Jones and Jeremy Lamb.

They have a lottery pick from the Raptors thanks to the James Harden trade and they're not over the luxury tax. If general manager Sam Presti wanted, he could even create more room to maneuver by amnestying poor Kendrick Perkins, whose game has deteriorated badly since tearing his ACL in Game 6 of the 2010 Finals. (Side note. There are still people in Boston who think Danny Ainge wrecked the Celtics by trading Perk in 2011. These people do not have League Pass or are named Rajon Rondo.)

While the Thunder took an obvious step back by losing in the conference semifinals to the Grizzlies, they did make solid progress during the regular season, rising from middle of the pack to fourth in points allowed per 100 possessions, per Basketball Reference. Injuries are the great equalizer, and once Westbrook went down, the Thunder were living on borrowed time. It sucks. It happens. They'll be back. 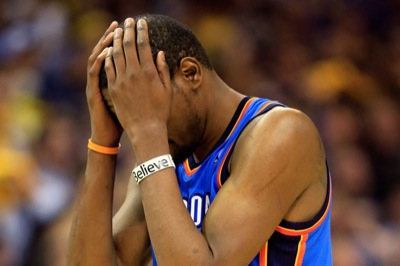 Welcome to Loud City copes with a season ending.

In the hot sportz take land we live in, there will be media jackals trying to take Durant down a peg for his poor shooting performances down the stretch. They'll be wrong. Oddly, these will probably be the same people who claimed Westbrook was killing the Thunder. No retreat, no surrender, just find a different sacred cow to slaughter and gorge on the remains.

There will be calls for Scott Brooks to evolve and adapt, and these will be closer to the mark. In a way, his lack of evolution is understandable. The Thunder were blessed with remarkable injury luck this season. Their top seven players missed a grand total of 14 regular season games in 2012-13. That's not normal.

Coaching inspiration is often derived from the desperation of replacing injured players in the rotation. That leads to experimentation with lineups and combinations. Brooks didn't do any of that this season because he never had to, and it cost him in the playoffs when his reliance on traditional lineups and heady veterans played right into the Grizzlies' grinding approach.

If the Thunder had Westbrook, they would have been favored against Memphis and whoever makes it through the conference finals. The real test would have come against the Heat, and Brooks gave no indication that he had learned his lessons from last year's Finals. Instead, his comeuppance came earlier than expected.

Brooks must grow as a coach next season. He now knows that he has a valuable talent with Jackson, and a two-point -guard look with him and Westbrook is worth exploring during the regular season even if it costs him a game or two. Durant should get more minutes at power forward and the offense should be less reliant on Westbrook's ability to create something from nothing.

Championship windows never last as long as you think.

What is true is that championship windows never last as long as you think. Ask the Celtics, who will always lament Kevin Garnett's knee injury in 2009, or the Heat, who are one Dwyane Wade tweak away from being vulnerable. It takes a remarkable amount of good fortune to win an NBA championship. That should never be taken for granted.

The James Harden trade hangs over their heads as a cautionary tale, yet decisions that are made for the long-term can't be solely measured by short-term results. In terms of value, Presti made a good deal, but that doesn't make things any easier today.

Would a Thunder team with Harden have been able to survive without Westbrook? Maybe. Would they have received as much in return if they had waited? That's a tougher question to answer, and neither involve an honest response because there's no way to know for sure.

It has been an incredibly smooth ride for the Thunder the past four seasons. They improved each year in the win column and made appropriate advances in the playoffs. This is the first real adversity they've faced since beginning their ascent, and it will be fascinating to see if the notoriously-patient Presti decides to shake things up again.

The end result may have been disappointing, but it will only be a wasted year if the Thunder don't learn from the experience.

Grizzlies vs. Thunder: Memphis holds on for series-clinching Game 5 victory