NBA Draft 2013: Dennis Schroeder out to prove he's his own man

German point guard Dennis Schroeder made a name for himself at the Nike Hoops Summit. Now he's set to cash in at the 2013 NBA Draft.

Share All sharing options for: NBA Draft 2013: Dennis Schroeder out to prove he's his own man

CHICAGO -- Dennis Schroeder wants you to know he isn't like these American kids. Just 19 years old, Schroeder spent the last two seasons as a lightning-quick point guard in the top German pro league. While the majority of the 2013 NBA Draft class have spent their entire lives playing against peer-aged competition (or, in the case of Shabazz Muhammad, younger competition), Schroeder is the exception. He has been fighting off bigger, older opponents since he first picked up a basketball. He believes he's better for it.

It's a fact never far from Schroeder's mind. He can't participate at the combine because of a tooth infection and the medication that comes with it, but the German's presence isn't lost on the horde of NBA scouts and general managers in attendance at Attack Athletics on the west side of the city.

As the rest of the point guards go through shooting drills, the buzz behind the sidelined Schroeder remains as strong as anyone's. News spread Thursday that he already has a first-round promise from one team. It's a virtual certainty he'll be one of the first four point guards selected, alongside Michigan's Trey Burke, Syracuse's Michael Carter-Williams and Miami's Shane Larkin.

When asked how he stacks up to the other lead guards in the draft, Schroeder doesn't hesitate.

"In Germany, the 18, 19-year-old boys are not like here in America," he said. "It's completely different. I still think I got the advantage because I play in the German League ... against men." 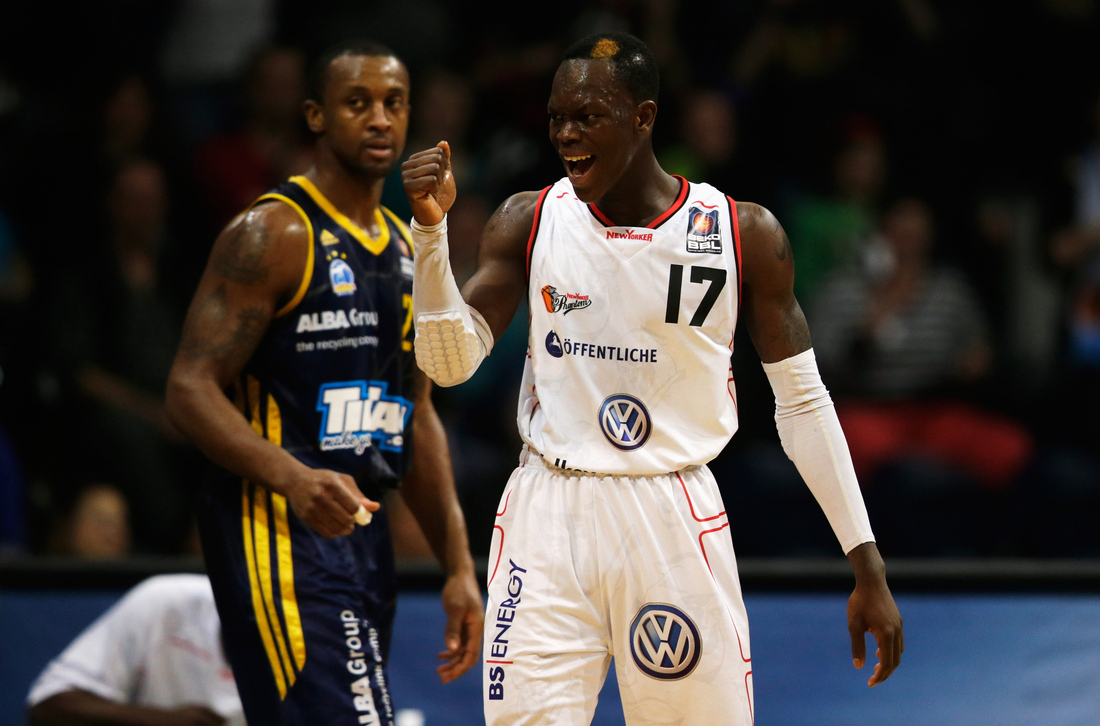 The first thing you notice about Schroeder is the gold patch in his hair. It seems fitting for someone who spent time working in the salon owned by his mother after his father passed away from heart failure three years ago, a tragedy Schroeder says helped him take the game more seriously.

His hair isn't the only thing that makes Schroeder distinct. His first love was skateboarding, a fact that may be evident in a playing style that could be affectionately described as radical.

While the NBA is full of point guards who earn their paycheck getting buckets, Schroeder has different priorities.

"The first thing is defense," Schroeder said. "I try to lead the team and not to score. Try to find the open guy."

Schroeder can be a wizard with the ball, as evident by the ample amount of spin moves he executed during his breakout performance at the Nike Hoops Summit last month. But seeing his nearly 6'8 wingspan, wide shoulders and jarring quickness, there's one NBA comparison that immediately comes to mind for Schroeder. He's well-aware of it.

Playing time is hardly guaranteed for even the most promising young players in Europe, but Schroeder's talent quickly proved too dynamic to keep him tied to the bench. In his first season with the New Yorker Phantoms, Schroeder averaged just eight minutes per game, posting 2.3 points, 0.7 assists and 0.8 rebounds per contest. This past season is when he really started to spread his wings.

Schroeder's playing time jumped to 25 minutes per game this season, and results followed. Schroeder averaged 12.0 points, 3.2 assists and 2.5 rebounds per game, which included three 20-point efforts. He posted a 36-point game against Oldenburg playing for B-league team SU Medien in late November that included 5-of-11 shooting from three-point range.

Just don't confuse his willingness to compare himself to Rajon Rondo with an inability to shoot. He shot 40.2 percent on three-pointers this season and hit 84 percent of his free throws. Still, much like many of the prospects at the combine, Schroeder was quick to point out one of the biggest challenges he'll face at the next level is the NBA's extended three-point line.

Schroeder says he has been shooting 150-200 extra jumpers at the end of every practice and is focused on extending his range. He's starting from mid-range and working his way out.

It wasn't until an impressive effort in Portland at the Nike Hoops Summit that Schroeder's stock really started to explode. Playing on the same team as incoming freshman phenom Andrew Wiggins and against top American-born players like Andrew Harrison, Julius Randle and Jabari Parker, Schroeder more than held his own.

He excelled in practices during the week and delivered in the game, as well. Schroeder finished with 18 points (one more than Wiggins) on 5-of-10 shooting to go along with six assists. More importantly, the opposition's highly-touted backcourt of Harrison and Kasey Hill finished the night a combined 5-for-16 from the field.

"I think (Hoops Summit) helped me a lot," Schroeder said. "Before the Hoops Summit, nobody knew me. I played good in the game and now the scouts want to see me workout. It helped me."

Schroeder is a mystery no more, and the hype will only continue to grow as the draft nears. Marcus Smart's decision to remain at Oklahoma State for another season bumped each point guard up a peg, and Schroeder will be among those reaping the benefits.