Derrick Rose missed the entirety of the 2012-2013 season while recovering from a torn ACL. Wizards rookie Bradley Beal said he'd lose some respect for a teammate under the same circumstances.

When the Miami Heat defeated the Chicago Bulls in Game 5 of the Eastern Conference Semifinals on Wednesday, it was an end not only for Chicago's season but also for the drama surrounding sidelined point guard Derrick Rose. Rose missed the entire season recovering from an ACL injury he suffered on April 28 of last year in the playoffs against the Philadelphia 76ers, despite being cleared to play by the team since the beginning of March.

The Derrick Rose drama has reached its breaking point 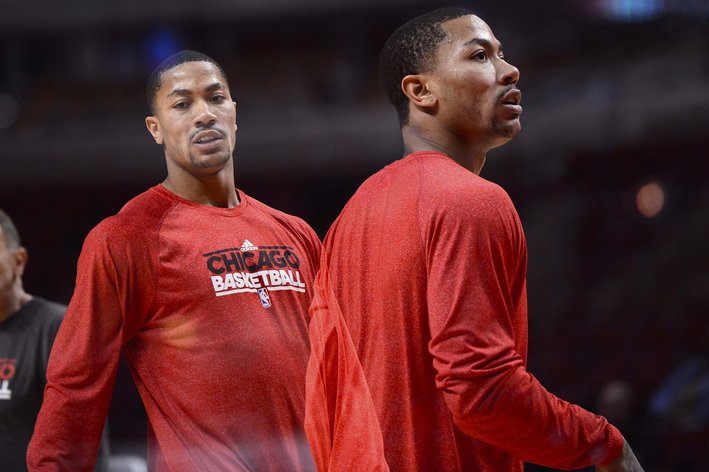 Derrick Rose probably should have returned, he didn't and that's OK

Rose's decision to willingly sit out drew the ire of many fans in Chicago because it was a largely unprecedented move. Lots of athletes have sustained a torn ACL over the last decade, but few (if any) have chosen to take over 12 months to recover. That Rose chose to sit in spite of his doctor's recommendation that the next step in his recovery process was to play in games made the Bulls star the target of frustration for some in his home city. The Bulls' gritty performance in the postseason through numerous injuries didn't help Rose's cause.

Rose's decision was supported by the organization and his teammates, with Joakim Noah's defense of Rose in the playoffs serving as the most memorable sign of solidarity. While Rose faced some criticism in the media for choosing to take his time and make a full recovery, Friday marked a first in Rose's elongated recovery: he was (kind of) criticized by a fellow NBA player.

Washington Wizards rookie Bradley Beal appeared on 106.7 The Fan and was asked if he would lose some respect for a teammate that chose to sit out despite being cleared to play, like Rose. Beal's response:

"A little bit. Yeah, I would," he said. "The type of player he is, and the mentality and competitiveness that he has, I think he would have gave it a go. I don’t know what was holding him back. I think he’s scared it’s probably going to happen again and he won’t be the same. But you’re never the same after an injury. But you just have to fight through it and do something else to be able to impact the game. I’m not sure what it is he has to do. I really can’t speak for him."

Beal was also quick to note that he had never experienced an injury as significant as Rose's. Taken as a whole, Beal's comments might not be terribly controversial, but it still marks the first time an NBA player has done anything other than support Rose.

Beal reached out to Rose via Twitter to clarify that he intended no harm by responding to the question in the radio interview:

Hey @drose would hate for u to think I meant any disrespect. Only u know when u r ready to play! Can't wait to see u back out there next yr!