Nerlens Noel has the pedigree of a top pick in the NBA draft, he just doesn't have the size. Does the Kentucky center have what it takes to play center in the NBA?

Share All sharing options for: NBA Draft 2013: Can Nerlens Noel man the middle?

There wasn't an exact moment when the NBA started to hedge its way toward institutionalized "small ball." But if you were forced to pinpoint one, Game 1 of the 2012 Eastern Conference Semifinals might make the most sense. That's when the Miami Heat lost Chris Bosh to a lower abdominal injury against the Indiana Pacers, forcing the team to shift LeBron James from small forward to power forward and inadvertently stumbling upon its most potent lineup.

It's true that James is essentially a basketball category unto himself, but the effect of having a small, faster player with shooting ability at the four was unmistakable. This season, most teams took notice.

Kevin Durant couldn't bench press 185 lbs. a single time when he was going through the draft combine in 2007, but that didn't stop the Oklahoma City Thunder from sticking him at power forward in what might have been the team's most effective lineup. Carmelo Anthony is hardly a big-bodied banger down low, but the New York Knicks' offense proved to be substantially more deadly when he was shifted to power forward. There's no denying how dynamic smaller, faster lineups can be in today's game, a strategy that simultaneously allows a team to play its best athletes while also opening up the paint for those same players.

There is, however, one position that likely isn't getting smaller anytime soon. That would be center, where Earth's biggest and most athletic humans are still free to roam. This presents a problem for Nerlens Noel, the Kentucky big man largely presumed to be the No. 1 overall selection in the 2013 NBA Draft. There was questions about Noel's viability as an NBA center before the draft combine this week in Chicago, but those lingering doubts are now going to be amplified.

Nerlens Noel weighed in at only 206 lbs. Does an NBA center so slim stand a chance? 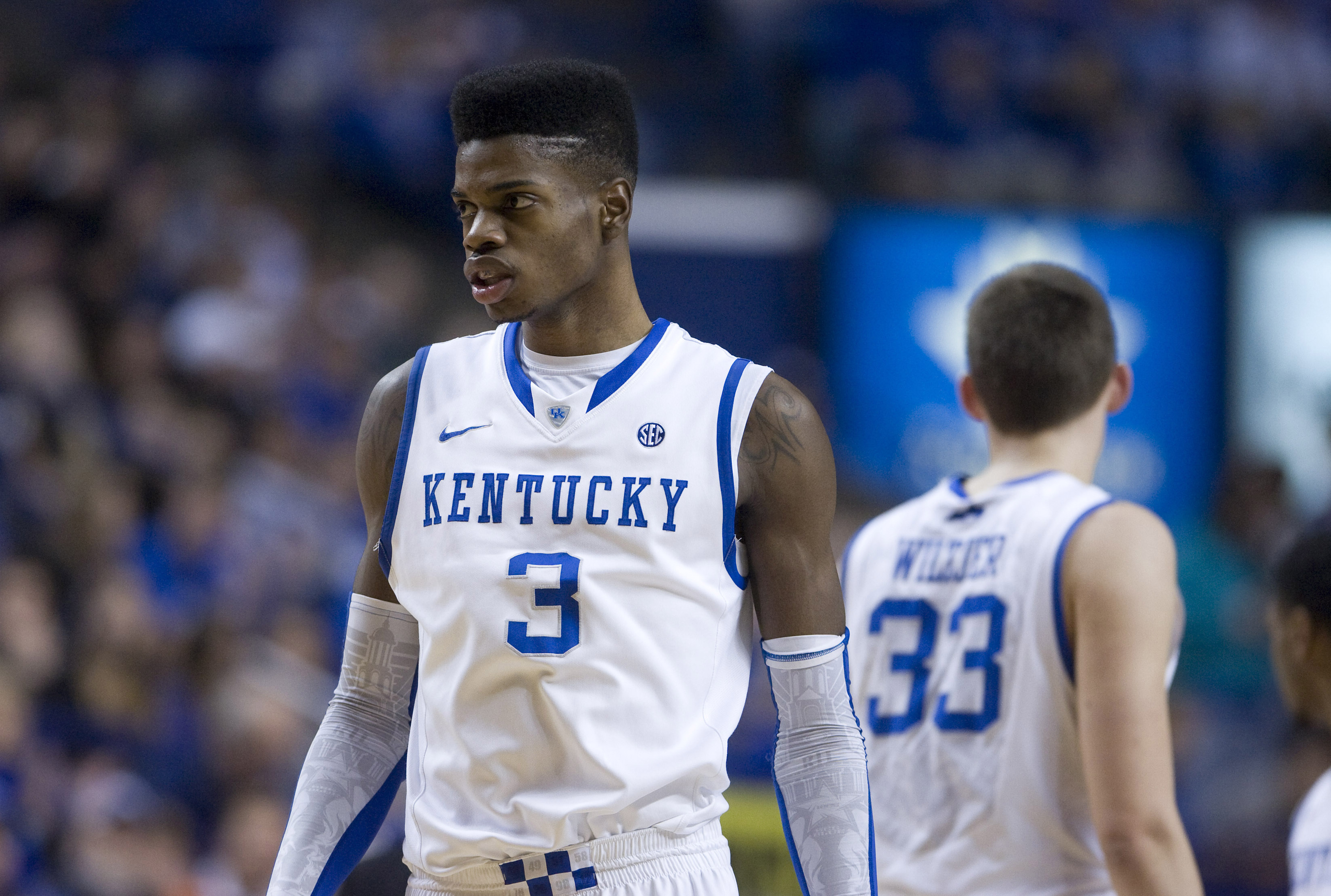 "I think I dropped a little weight from the injury," Noel said on Friday at the combine. "Not being able to work out as much as I was before the injury. I'm definitely looking to get back up. I've been able to do a little more now. I'm ready to start working out and get the muscle back in my leg."

The injury Noel refers to happened on February 12 against Florida. Gators guard Mike Rosario was off to a fast break when Noel caught up. As he leaped to block Rosario's layup, Noel's knee buckled and he fell to the ground in pain. Basketball fans were too accustomed to the scene to be fooled. Just like Derrick Rose and Iman Shumpert before him, Noel had a torn ACL. From this point on, his career would be defined by how he recovered from it.

Noel said he considered returning to school for his sophomore season to rehab his knee, but the allure of NBA millions eventually won out. Why do something for free when you can be paid handsomely for going through a similar routine? It's impossible to blame Noel for entering the NBA draft with a torn ACL, just as it's impossible to blame the general manager that selects him in the top five, and perhaps No. 1 overall. There is, after all, a lot to like about Nerlens Noel.

Following in the shadow of Anthony Davis is no easy task. Davis set college basketball ablaze during his one year at Kentucky, winning freshman of the year, the Wooden Award for the best player in the sport, and helping lead what might have been a historically good Wildcats team to a 38-2 record on the way to a national title. Noel was supposed to be the next Anthony Davis, a stud big man recruited by John Calipari who would give Kentucky an immeasurable physical advantage over its competition.

Things don't always work out as planned, and Kentucky's season was a premium example. The Wildcats never found their footing in 2012-13, and Noel's ACL injury precipitated a fall that led Kentucky all the way to a first round loss in the N.I.T. to Robert Morris.

While Noel might not have been as dominant as Davis before tearing his ACL, he was still pretty damn good.

Noel's shot-blocking instincts are considered second-to-none, a point he hammered home by swatting 4.4 shots per game at Kentucky, just a shade under what Davis averaged. Noel shot 59 percent from the field (mostly on dunks and putbacks) to average 10.5 points per game to go along with 9.5 rebounds per game. Noel didn't take the college game by storm the same way Davis did, but it's fair to point out Kentucky's guards weren't nearly as good at getting the ball inside.

Now Noel is ready to take the next step. The question is, how does he measure up to the physical marvels playing center in the NBA?

"225 is where I was about," said Noel on Friday at the combine. "That's where I got to in the offseason while I was at Kentucky. I'm definitely looking to get back up there and I know it won't be hard. I put on weight pretty fast."

Noel better hope he can while still retaining the athleticism that makes him a special prospect. Because in the NBA, even 225-pound centers are scarce. At Noel's current weight, he'd be comparable to pro shooting guards.

Just what will Noel be up against when he finally plays in an NBA game? A quick look around the league reveals a lot.

Marc Gasol won Defensive Player of the Year for the Memphis Grizzlies. He's listed at 265 lbs. Pacers center Roy Hibbert is 280 lbs. Dwight Howard is 260 lbs. From Andrew Bogut to DeMarcus Cousins, you'll be hard-pressed to find a center who isn't 40 lbs. heavier than Noel's targeted weight. Even Tyson Chandler, always noted for his slender body, is 240 lbs.

"You get what you see. Everything is a work in progress." -Nerlens Noel

There are some smaller centers, like Chicago's Joakim Noah. But even at 235 lbs., Noah is distinct by his guard-like skills. Noel doesn't have the handle or passing ability that makes Noah such an offensive weapon for the Bulls. Or does he?

When asked if he feels like his offensive skill set is underrated -- from his ball-handling to his face-up shooting to his passing ability -- Noel doesn't feel the need to defend his reputation.

"Nah, you get what you see," he says. "Everything is a work in progress."

If there's a pro center who Noel really compares to right now, it might be Milwaukee's Larry Sanders. Sanders was the Bucks' breakout star this season, finishing second in the league in blocks and proving to be a disruptive rim protector. That's what Noel could someday do for an NBA franchise. The question is, is that enough to warrant the No. 1 overall pick?

The injury concerns are also legitimate. Noel's injury is the same one that caused Bulls star Derrick Rose to sit out the entirety of the 2012-2013 season, though it's worth noting Rose was cleared by doctors to return in late February but opted to sit out and make a full recovery. Will Noel also choose to take his time?

"Nah, I doubt it will take 12 months," he said. "I'm definitely looking to get on the court as soon as possible so I can contribute to whatever team I go to.

"I got one of the best physical therapists in the country and I'm sure he wouldn't have me doing anything that wouldn't bring me along and wouldn't get my leg back to normal. I trust everything he says and everything he tells me to do. I'm going to do it 100 percent."

Noel is only now starting to get back to the court, where he's slowly starting to take free throws. He believes he'll soon to cleared to start jogging as he continues his rehabilitation. He tells reporters he's ahead of schedule, but of course Rose once said the same thing.

Noel has done all he can to put himself in a promising position on draft day. Now it's up to the fate of a few ping pong balls and the backbone of his brave GM to decide his NBA fate.

• Howard vented to GM about D'Antoni