Goodbye to the fantastically frustrating Knicks

New York had its best season in more than a decade, but still left observers wanting more. Paul Flannery has the post-mortem.

Share All sharing options for: Goodbye to the fantastically frustrating Knicks

The Knicks were better than we thought they'd be, but not quite as good as we wanted them to be. They won 54 games, claimed a division banner and advanced a round in the playoffs for the first time in over a dozen years by beating the despised Celtics. Any rational Knick fan would have signed up for that back in October and not thought twice.

The ending, however, was wholly unsatisfying. They squandered home court advantage in the second round and went out of their way to make it as difficult as possible by using questionable lineups and straying from what got them there in the first place.

Game 6 against the Pacers was a microcosm of everything that swirled around the Knicks and coach Mike Woodson this postseason. They started fast using the preferred small lineup and then Woodson left Pablo Prigioni on the bench for an interminable second quarter that saw J.R. Smith do every bad thing J.R. Smith does on a basketball court.

Things looked bleak in the third as the Pacers built a 12-point lead, but the Knicks came firing back behind an inspiring performance from Carmelo Anthony and an unconscious shooting exhibition by Iman Shumpert. All that and all the Chris Copeland the devoted army of Knicks bloggers could ever want. This was happening!

The Pacers are happening 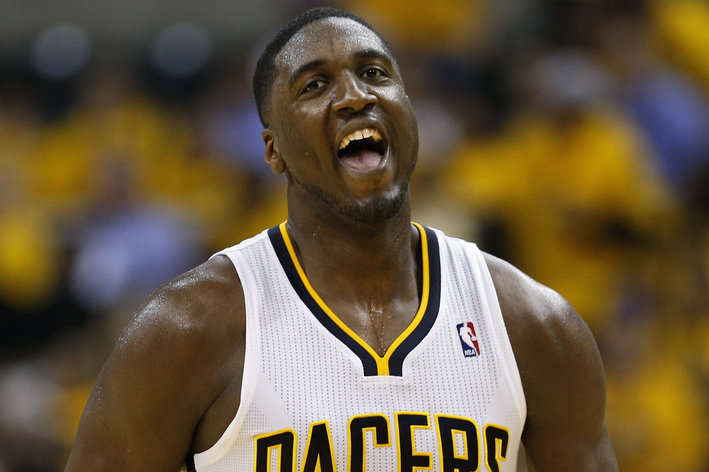 They ran out of steam in the fourth quarter as Woodson stubbornly refused to use his best combinations and the ghost of Tyson Chandler fouled out. The Knicks died as they lived, alternating between exhilarating highs and maddening lows.

Credit the Pacers, who did what they set out to do and (mostly) stayed true to themselves throughout a six-game series that played heavily in their favor. Paul George may not be a superstar yet, but he's on his way. Roy Hibbert was a beast, David West was a rock and Lance Stephenson of all people sent the Knicks packing with a bravura 25-and-10 performance that was easily the finest moment of his star-crossed career.

For many reasons, this series has felt less about what Indiana's done well then what the Knicks have done poorly. That's not fair to the Pacers, but they can console themselves with a much-deserved trip to the conference finals and another shot at LeBron James and the Heat. Say what you will, but Indiana plays Miami tough and the Heat remember last year's second-round slugfest.

This one will sting for the Knicks, but there were enough good moments to rekindle the love affair between a fanbase and a team that often hasn't returned the favor. To wit:

Anthony attained superstar status in more than just reputation with a top-five season, buoyed by an overdue move to the four where he's an impossible cover. Chandler continued his rather amazing third NBA act with his first All-Star appearance and Smith parlayed two really good months into the Sixth Man of the Year. Shumpert made a healthy return and Ray Felton returned to his spiritual home, running the pick and roll in Madison Square Garden. Prigioni, Copeland and Steve Novak became MSG cult heroes.

Management's decision to turn their backs on the last vestiges of the Mike D'Antoni era and hire a bunch of veterans proved to be the right one. Jason Kidd had a little something left (during the regular season, anyway) and we even got some bonus Sheed. All in all, not bad.

Posting & Toasting: It's over

But it still feels incomplete. At times this season the Knicks played as well as any other team in the league. They won their first six games and 18 of their first 23. Down the stretch they took 13 straight and 16 of 18 to end the season with aspirations of reaching the conference finals and giving the Heat a run.

Somewhere between the end of the season and Smith's elbow to Jason Terry late in Game 3 against the Celtics, the Knicks lost their way. It took three more games and an anxious fourth quarter to put the C's out of their misery and they played the semifinals in catch-up mode against a more solid Pacer club.

Woodson, who did such a wonderful job blending personalities and lineups during the regular season, reverted to his worst tendencies when things got tight, riding his veterans past the breaking point and insisting on playing conventionally against a conventionally better opponent. If the Knicks are going to remain relevant, Woodson has to understand that his team is at its best when he lets it be quirky.

Melo seemed to fight himself throughout the entire playoff run. He forced the issue too many times, rarely trusted his teammates and tried to take the whole thing on his shoulders. Of course, he had his reasons. Smith's jumper and focus went AWOL, Chandler wasn't healthy and Kidd's gas gauge was constantly on Empty.

It's tough to blame Anthony, who was phenomenal in Game 6, but there's the nagging feeling that even when he's at his best it still won't be enough to put the Knicks over the top. Chandler's not getting any younger and with big money still on the books for Amar'e Stoudemire, the Knicks are capped out with few ways to improve a roster that has its share of holes.

The Knicks turned a massive corner this season and it's also possible they have already hit their ceiling. This doesn't feel like the beginning as much as the end of a weird, wild ride that will be difficult to duplicate. In the end, it was worth it just to hear MSG alive again. A final salute to the Knicks who were crazy random and randomly crazy. You'll always have April.

• Can Nerlens Noel play in the middle?

• The Charlotte Hornets are back