Celtics survive and push Knicks' swagger into the grave

The Knicks prepared for the Celtics' funeral. Instead, Game 5 buried New York's confidence.

Share All sharing options for: Celtics survive and push Knicks' swagger into the grave

NEW YORK -- Avery Bradley considered the question for a moment. For someone so young, Bradley is an extremely thoughtful young man and he wanted to give a considered answer. What did he make of Kevin Garnett, 36 years old with 37 right around the corner, grabbing 52 rebounds over the last three games after sitting out most of the final month of the season?

"That’s amazing, man," Bradley said. "He’s an amazing player. He’s just amazing." Then he laughed. "That’s all you can say."

More Playoffs: Wednesday night action Grizzlies back from the head

We’ll never learn, will we? Whether it’s 2-0 or down a game on the road, we’ll never learn that you can push them so far to the brink of death that the Knicks felt it was appropriate to wear black tonight and they all but laughed at the dark humor. We’ll never learn that even when the priest comes around to administer last rites, it’s not over until the coffin is sealed and buried six feet in the ground with dirt shoveled on top.

"You’re only buried if the casket is closed," Jason Terry said, and the Celtics are still, somehow, very much alive after leaving Madison Square Garden with a 92-86 victory in Game 5 of their first round series with the Knicks.

"Shenanigans," the Celtics called the all-black stunt, and they know from that, too. They can dish it out as well, although whatever possessed Jordan Crawford to talk smack to Carmelo Anthony after it was over was not well received by Doc Rivers.

"I’m not thinking about Jordan Crawford," Melo said. "Not at this point in time, I’ll tell you that. I don’t even think he even deserves for you to be typing right now."

"Put your hard hat on. Throw your hammers and your nails down. It’s time to work. Let’s do it." -Kevin Garnett

But the Knicks are thinking about the Celtics. They have to be. The old guys were done. Couldn’t score, couldn’t rebound, couldn’t keep a handle on the ball. Could barely field a competent starting five. And now …

"We out here scrapping," Garnett bellowed on the team’s postgame show. "This is all about survival. Put your hard hat on. Throw your hammers and your nails down. It’s time to work. Let’s do it."

"We’re good," Melo assured everyone and at this point we need to take a step back and remember that all the Celtics have done is thrown a scare into New York. They still have to take care of business back in Boston on Friday and even if they do manage to get through that game they’ll have to come back here and do it again.

"Momentum means nothing right now," Terry said. "This is all about grit and grind. One possession, one quarter at a time and see what happens. We have nothing to lose.

First, the basketball analysis. For the first time in the series the Celtics finally stayed patient with New York’s traps and moved the ball. That’s all they worked on in the days between Game 4’s great escape and Wednesday’s revival meeting.

"We were not taking advantage of their traps," Doc Rivers said. "That’s why we got the threes, that’s why Brandon (Bass) got the easy baskets. To do that you just got to trust each other. In the series for us that’s the first game we had complete trust." 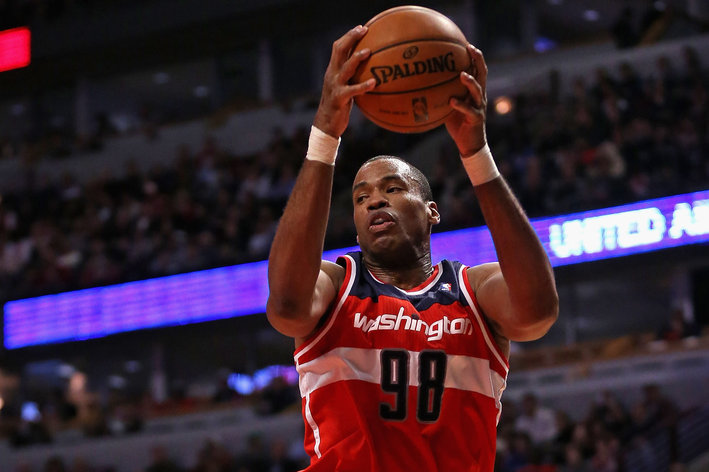 Paul Flannery talks about the implications and impact of Jason Collins' historic announcement.

Rivers got on them at halftime, telling them they had to be more aggressive. "I kept telling them to let it fly," the coach said. "Don’t hesitate. If it’s contested move it. If it’s not contested, shoot it."

So simple, and yet for this team so difficult at the same time. Trust, movement, confidence. Those three things haven’t been evident during this series and certainly not for four quarters. They also responded to every one of New York’s runs, including the one that opened the game with 11 straight points.

The result was their best offensive showing by far. They made 11 of their 22 shots from behind the arc and Bass had 17 on just seven shots, equaling his total in the first four games. Five different players scored 16 or more points and only Pierce and Terry attempted more than 10 shots.

Terry knocked down five three-pointers and Pierce hit four more. When they absolutely had to have it, Jeff Green morphed into Dr. J for a swooping dunk down the lane and then calmly buried a couple of corner threes like he’d been doing it all game.

They still had 15 turnovers, but they kept the really horrific ones to a minimum. Garnett owned the defensive glass, grabbing 16 of his 18 boards and keeping the Knicks to just seven second-chance points.

"That’s what Kevin does," Pierce said. "He’s a legend in this game. He’s one of the greatest players to ever play this game. You’re seeing when the great ones get challenged what they’re able to do and that’s what you’re seeing with Kevin Garnett."

From the blogs: CelticsBlog on KG's defiance P&T on the search for answers

"We have to be really good defensively, I mean great," Rivers said. "We know our limitations on the other end. For us to keep going we have to be great defensively."

And Rivers coached his ass off. He kept his rotation tight, using just seven players all game. He stole minutes for Garnett when he could and made the excruciating decision to rest KG for a few minutes in the fourth quarter. It paid off when Garnett found enough in his legs to bury a turnaround jumper upon his return.

He turned to Terrence Williams, of all people, and got 17 minutes of competent ballhandling and solid defense. "I don’t know what I saw, honestly," Rivers said. "Sometimes you just pull out a card and he was it tonight. Hopefully Avery will be it next game."

And now, the other stuff. The stuff that endears them to their fans and makes their opponents queasy. In their own sick, perverse way, they need to be in this position with nowhere to go and nothing left but the chance at a tomorrow.

But in Garnett's own weird way he does. Yes, the names have changed considerably over the years. Most of the players who were around for all those Game 7s and all those long runs through incalculable odds have moved on. Some have even retired. But as long and Pierce and Garnett can do their thing and Rivers can call the shots from the sidelines, they’re still the Celtics.

You don’t beat them as much as outlast them. There’s no logical explanation for this but here they are again and now the Knicks will have to deal with them on their terms and their turf.

• The NBA's best GIFs from Wednesday

• The Grizzlies are back from the dead

• Film review: Were the Nuggets dirty?