The affordability of an elite NBA defense

All final four NBA teams in the 2013 playoffs have elite defenses. What's most interesting about that is that three of the teams have manageable payrolls, too.

Share All sharing options for: The affordability of an elite NBA defense

There are a number of interesting notes about the NBA's four conference finals participants including ...

This is all interrelated, and not as any sort of dictate about the lockout and its revival of the small market. It tells a story about how you can build an affordable champion. And by affordable I mean "above the league's $49 million payroll floor."

Defense is cheaper than offense in the NBA. (The exception is at center, where even defense-skewed players are pricey.) Scoring is the top determinant for individual salary; if you have a couple of 22-point scorers, you're going to be outlaying a lot of money for offense. Some of the top defenders, though, make a pittance. Consider Tony Allen, the Grizzlies' ace perimeter defender. He's made All-Defense three straight years, including the first team in the past two seasons. He's wrapping up a three-year, $9.5 million contract. The Grizzlies' old top scorer, Rudy Gay, who was traded in January, made $16.4 million just this season to score 20 points a game. 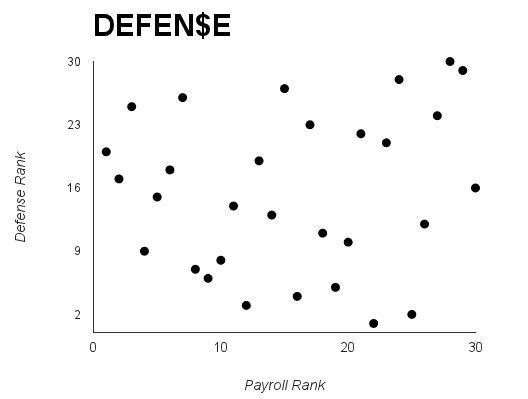 Not exactly tightly organized around a strong positive correlation.

Two notes: notice the relative lack of defensive excellence among the most expensive teams (look at you, Lakers, Nets and Knicks) and notice that the cheapest teams are typically also the worst at defense, with the Pacers and Grizzlies being exceptions. I would suggest that the worst teams in the NBA are bad on both ends and have low payrolls.

It's worth noting that during this exercise data suggested that the factor most tightly correlated with payroll is one that's not performance-based at all: it's age, which, duh, obviously. But that's a major argument for rebuilding that often isn't explicitly made: you can have a couple of years with very low expenses if you rebuild, and then the climb back to respectability can remain relatively cheap, as the young Pacers have shown.

• Flannery: Saying goodbye to the Knicks