The lockout did not give us an NBA final four lousy with small markets. Smart front offices, great players and good coaching did.

In the first full season since the NBA’s collective bargaining agreement went into effect, three of the four conference finalists are small market franchises. The fourth -- Miami -- is right in the middle of the pack.

The Heat, who are the exception to every rule, are the only one of the four that’s over the luxury tax. Free-spending big market teams in Los Angeles and New York have already shuffled off this postseason coil, undone by injuries and outsized expectations.

On the surface this look like a clear winner for the league’s stated goal of delivering a more competitive landscape for its teams, but that’s an incredibly superficial reading of a cause and effect relationship that is only beginning to take shape. It’s simply way too early to make grand pronouncements about the league’s new financial reality.

There is no doubt that the new CBA has affected the way teams do business. The new harsher luxury tax restrictions motivated moves from Oklahoma City to Memphis and had a chilling effect on the trade deadline where deals were harder to make. 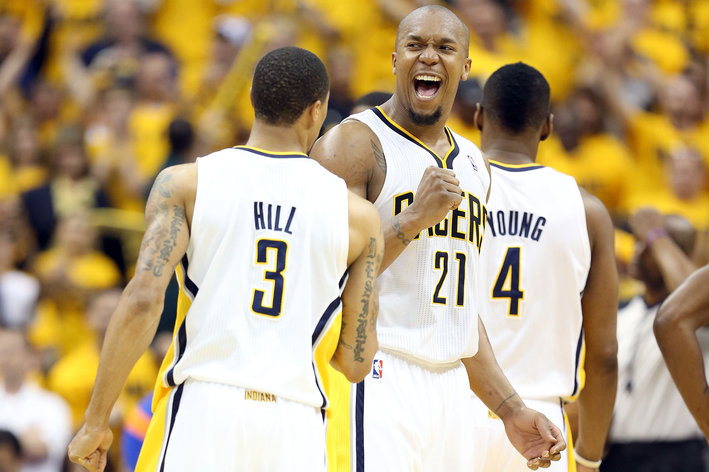 Building an elite defense comes at a much lower cost than you'd think. Tom Ziller explains that the NBA's final four shows why.

This summer will likely continue to mold the transition. It’s not just the max contracts for franchise players that wreak havoc on team’s balance sheets. It’s the mid-level deals for middling players that cause so much pain. We’ll know if teams have truly embraced austerity if they resist the urge to blow cap space on flashy inefficient scorers and underwhelming big men.

Yet thriftiness does not equal success any more than a bottomless bank account guarantees championships. We’re only two seasons into a long agreement and the four conference finalists were largely built before the new CBA went into effect. They have tried and true lessons to teach the rest of the league about scouting, drafting and player evaluation, but the real takeaway is there is no one way to build a team in this era.

Adding two superstar players in their prime to a roster that already has a cornerstone player made them perennial championship favorites and also put them way over the luxury tax. Every other team would follow the Miami plan if they could, but not all of them can and the Heat are the only one to successfully pull it off.

LeBron James is everything in this equation, but what truly separates the Heat from other big spenders is the way they’ve used their exceptions to flesh out the roster. Few teams have done as well adding complementary players like Shane Battier and Ray Allen specifically to fit into its system as Miami.

The Heat essentially created their own niche market that only a handful of teams can even hope to compete against.

The warm weather and the lack of a state income tax are obvious draws that few teams can match, but so is the chance to play with LeBron, as well as Chris Bosh and Dwyane Wade. The Heat essentially created their own niche market that only a handful of teams can even hope to compete against.

That didn’t stop the Lakers and Knicks from trying. The Lakers were undone by injuries and a top-heavy roster, while the Knicks are stuck in the unenviable position of paying Amar’e Stoudemire huge money for diminishing returns.

Again, it’s not just the max deals that separate the big markets from the rest of the league. Would any other team give three-year contracts to Jason Kidd and Marcus Camby, while giving up picks as well? The new CBA did nothing to stop those grandiose/delusional plans that exist in the largest markets.

A small-market success story, the Pacers spent years tearing down a strong but combustible contender and did most of their work through the draft. From Danny Granger to Paul George and Roy Hibbert, the Pacers mined the middle of the first round to find impact players where they don’t usually exist. Steady point guard George Hill was acquired in a draft-day deal with the Spurs for Kawhi Leonard, another mid-round pick.

That’s a credit to scouting and player development and the lesson here is that well-run teams can compete at the highest level if everything goes right and you get a little lucky in the draft. The Pacers have enjoyed a slow and steady rise from first round fodder to the second round and the conference finals, but Indiana is already facing some tough decisions.

Granger missed all season with a knee injury and has another year left at over $14 million. In his absence, George developed into a potential franchise player. Coincidentally he’s eligible for an extension after this season. Indiana can wait a year before extending George and either trade Granger or wait for his deal to come off the books.

There’s a point when a pivotal decision will either put a team over the top or send a small-market team back to the drawing board.

It’s a little trickier with David West, who was their lone big free agent acquisition. West is still productive and the conscience of the locker room, but he’s also 32 years old and a free agent after this summer.

How much will Indiana commit to keeping the core in place? There’s a point when a pivotal decision will either put a team over the top or send a small-market team back to the drawing board. That’s where the Pacers are now.

Consider the Thunder, one of the smallest markets in the league. Like the Pacers they were built through the draft, and when the moment of reckoning came Sam Presti shipped out James Harden to get under the tax and maintain flexibility.

In financial terms, the luxury tax affects small market teams much more than their large market brethren, just as it always has. The difference is that the big markets may not be able to recover as quickly from bad decisions, but as long as they can write checks they can kick the tough decisions down the road.

As much of an exception as the Heat, San Antonio exists in its own universe with a seemingly ageless core, the league’s best coach and one of its finest front offices. If every team was run as well as the Spurs then competitive balance would never be an issue. Of course, not every team is and there are only so many Tim Duncans to go around.

It takes more than lottery luck to accomplish what the Spurs have achieved during the Duncan era. They’ve been ahead of the curve in international scouting -- Tony Parker, Manu Ginobili and Tiago Splitter to name three -- and in finding unpolished gems like Danny Green and Gary Neal.

The Spurs have maximized their window like the Red Auerbach Celtics, who kept adding and subtracting pieces around Bill Russell for as long as possible. Speaking of Boston, Danny Ainge tried to keep the window propped open with an aging core as long as he could but the end result was a .500 team over the luxury tax. All things end eventually.

Until this season, the Grizzlies were an expensive curiosity with an uncertain expiration date.

GM Chris Wallace did a wonderful job assembling talent through trades and the draft and the Grizz spent money like a big market team, signing Zach Randolph, Marc Gasol, Rudy Gay and Mike Conley to extensions. For that they were rewarded with a 50-win team and a second round ceiling. Something had to give.

This was the crossroads moment and the Grizzlies took the right path.

The new front office team of Jason Levien and John Hollinger made what looks like the trade of the year, dumping Gay’s big contract while adding solid veteran Tayshaun Prince and rising big man Ed Davis. The deal not only saved money under the cap, it also benefitted the team on the court. The true cost wasn’t Gay, it was the first-round sweetener thrown into a separate trade with Cleveland to keep them far enough below the tax to maneuver.

This was the crossroads moment and the Grizzlies took the right path. They were also aided in no small part by Russell Westbrook’s injury. Their appearance in the conference finals is a testament to talent evaluation, progressive management and injury luck.

The counter? The Bulls, who were undone by Derrick Rose’s ACL tear. Without Rose, they had a top-heavy roster stuffed with big-money extensions for Joakim Noah, Luol Deng and Taj Gibson along with a big-ticket free agent in Carlos Boozer. Chicago fought admirably throughout the season, but the difference between the final four and the second round often comes down to health and the Bulls have now missed out on two postseason runs with this group.

The lessons before and after the new CBA haven’t changed that much. True franchise players make everything easier and there are only so many of them to go around. Smart front offices that utilize scouting, player development and innovative cap management will always have an advantage over those that don’t. Coaching and systems matter. Don’t get hurt.

If anything, the new CBA has shortened the window for small market teams to keep expensive cores in place. That may ultimately be a good thing if teams gain religion and temper their expectations, but it also closes the window more quickly. If that promotes competitive balance, it also comes at a cost of developing truly special teams.

Some teams like Dallas have already accepted this fact. Rather than bring back the core of a championship team for another Quixotic run, the Mavs stripped down to the bare bones by adding a number of veteran players on one-year contracts. It was a one-year gamble and while it didn’t work on the court, the books are now clear to replenish the roster for another shot with Dirk Nowitzki.

Knowing when a run is over is just as important as propping open a championship window. That’s the new reality and smart teams will think one or two years ahead. In five years' time perhaps we’ll see the true effects of the new CBA, but this year’s small market invasion is little more than a happy coincidence of talent, progressive thinking and good fortune.