An NBA Draft Lottery conspiracy theory for every team

Share All sharing options for: An NBA Draft Lottery conspiracy theory for every team

With the Lakers and Knicks both out of the playoffs, NBA conspiracy theorists have been getting a bit bored. It's difficult to come up with a plausible motive for David Stern to potentially set up a Grizzlies vs. Pacers NBA Finals series. But have no fear: the Super Bowl of sports conspiracy theories, the NBA Draft Lottery, arrives at 8:30 p.m. ET Tuesday.

To save you the trouble of tracking down conspiracy theorists to see what they have learned about how the ping pong balls will drop, we've put together a compendium of theories that results in a lottery win for each team. Enjoy.

Charlotte Horncats: Stern continues to owe Michael Jordan for retiring from a promising baseball career and preventing Shawn Kemp, Karl Malone and Patrick Ewing from becoming NBA champions. The league could never have recovered from any of those guys becoming the face of basketball. (And yes, Horncats is a thing.)

Cleveland Cavaliers: Multiple lottery victories were included in the blood oath signed by Stern and Cavs owner Dan Gilbert that led to Gilbert dropping tampering charges against the Heat. Had Gilbert continued his crusade, the Heat's 2011 Southeast Division title would have been vacated, and LeBron may have been Chris Webber'd out of history. Nerlens Noel is a small price to pay to prevent that.

Phoenix Suns: "Why is Robert Sarver carrying around that designer handbag? And why is there a glitchy film cut before the ball hopper is started? My God, did Sarver sneak loaded ping pong balls in via his wife's handbag? His wife must have told him to bring her back the No. 1 pick in a designer handbag ... interesting ..." 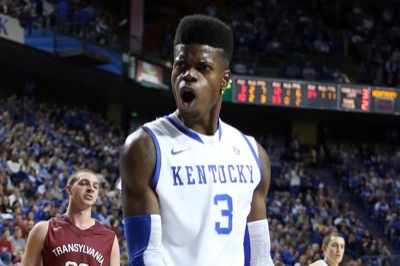 Sacramento Kings: This one is too easy. Sacramento keeps its team, David Stern needs to look smart. So he grants the Kings the No. 1 pick to build even more excitement for a 2013-14 season that will likely land the team back in the lottery for the bajillionth straight season.

Washington Wizards: Nice Presidential scandals you've got there, Republican Party. Would be a shame if something happened to them. Something like blazing liberal David Stern distracting the Beltway media circuit with a shiny new Nerlens Noel. The vast left-wing sports conspiracy strikes again. So transparent.

Minnesota Timberwolves: Cleveland lost LeBron in 2010 and won the lottery in 2011. The Hornets lost Chris Paul in 2011 and won the lottery in 2012. The Wolves lost Michael Beasley in 2012. You do the math. Also, Glen Taylor was long a loyal owner and Board of Governors chairman for Stern. He's looking to offload the team. Nerlens Noel boosts the value of the team by the equivalent of one suburban strip mall.

Portland Trail Blazers: David Stern is looking for a gently used yacht to take out on the open ocean in retirement. Paul Allen drives a hard bargain. In this case, a franchise center with no injury concerns whatsoever.

Philadelphia 76ers: To try to convince the drugged-up, naive masses, David Stern brings officials from the accounting firm Ernst & Young to the lottery to verify the legitimacy of the lottery. Ernst & Young, huh? That firm is lousy with Sam Hinkie's old MIT buddies. Looks like the verisimilitude of this event has been ... [puts on sunglasses] ... deep-sixed. [yeeeeeaaaaaahhhhh]

Toronto Raptors: Tim Leiweke left Illuminati party planners AEG to run the Raptors. No one can explain why. No one. But we find it very peculiar that Leiweke would choose the only NBA team outside of the United States of America. Either he's running from the law or he's assembling a business empire that plans a hostile takeover of freedom and liberty. Something smells funny.

Dallas Mavericks: This is David Stern's final draft lottery. He no doubt wants to leave a hint for future investigators. A calling card, if you will. No better way to nod at the conspiracy theorists than to hand victory to the city where modern conspiracy theory was born, especially considering that city has truly abysmal odds of winning straight-up.

Utah Jazz: The presence of three small market teams in the NBA's final four is actually a David Stern conspiracy after all! He wants to show that his lockout reforms worked as planned, and people are gullible enough to believe that nonsense. This will allow his successor Adam Silver to enact even more regressive salary rollbacks in 2017, all in the name of competitive balance and parity. Getting a small market fringe playoff team like Utah a top pick will certainly help the cause next season. The small market conspiracy continues unabated!