The only way for the Indiana Pacers to have a chance against the Miami Heat is for Paul George to rise to yet another level.

Share All sharing options for: Paul George's burden in the Eastern Conference Finals

Having just spent the last few weeks turning Carmelo Anthony's dream season into yet another Melo referendum, up-and-coming Indiana Pacers forward Paul George must now deal with the league's best player in LeBron James, who is at the height of his powers. Welcome to the elite player club, kid. It's tough to be considered for admission and even harder to gain entry.

No matter how you define it, the 23-year-old George has been one of the league's emerging bright lights this season. He made his first All-Star game, won the league's Most Improved Player award and earned a spot on the All-Defensive second team. In math terms, George upped his usage percentage in the wake of Danny Granger's injury-related absence. That is, he carried more of Indiana's offensive load while emerging as a perimeter stopper on the defensive end.

Beyond the accolades, the most encouraging development in George's third season was that he overcame a sluggish start where he was trying to be something he was not -- a combination of Granger and George. He became simply Paul George, a name that resonates with even casual fans. From early December through the close of the regular season, George averaged 18.4 points, eight rebounds and four assists while leading the Pacers to a division title.

George's development didn't stop in April. Last spring, he seemed overwhelmed on the playoff stage, shooting less than 40 percent and averaging fewer than 10 points per game. LeBron dominated him in the second round, scoring three times as often.

Breaking down the matchups 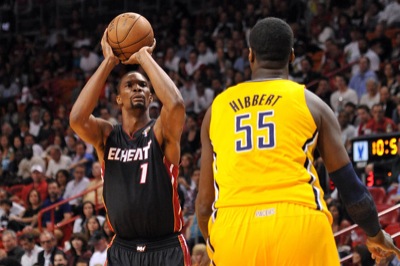 This postseason, George has continued to score even when his shot has abandoned him by getting to the free throw line almost eight times a game. His defense, particularly against Melo, has been superb. It takes a short memory to be a defensive stopper and George didn't let Anthony's periodic hot streaks affect the rest of each game.

As good as Melo is, LeBron is another matter entirely. James has dominated their matchup over the years, which is to be expected. He is bigger, more experienced, and simply a better all-around player. George finally got the better of him in January, scoring 29 points in an 87-77 win, but that stands as the one clear victory in their 15 games, including the playoffs.

No one is saying that George will have to outplay LeBron in the conference finals, but he will have to play him something close to even if Indiana is going to have any chance of pulling off a major upset. That was always Paul Pierce's mindset in their matchups, and few players have played LeBron as tough in the postseason as Pierce has.

That worked in 2008 and 2010 when LeBron's supporting cast wasn't up to the challenge, but in recent years, the C's used bigger and younger defenders like Brandon Bass and Jeff Green to guard James. Indiana may try using the rugged David West in that capacity, but George has all the physical tools to at least make life difficult for James and that's all anyone can ask for at this point.

It's not all on George, of course. Roy Hibbert looms as a major presence in this series and if Indiana can keep him on the floor and close to the basket he will be a major deterrent to the Heat's offense. George Hill must be steady and avoid turnovers. Lance Stephenson has to make enough shots to keep the Pacers' offense afloat.

No matter what coach Frank Vogel says, George and the Pacers have already achieved what they set out to do this season. They won the division and advanced another round in the playoffs. By any measure that's a very successful season.

But if the Pacers are going to do something even more special, it will take a spectacular effort from all of them. No one will be in the spotlight as much as George. For everything he's done, this series will define his year in a way that will dwarf his other accomplishments. It ain't easy being a star. We're about to find out just how far George has come this season.