The Pacers lost on a layup at the buzzer with Roy Hibbert on the bench. But Miami just designed an amazing play, and Paul George botched his coverage.

The world witnessed a thrilling ending between the Miami Heat and Indiana Pacers in Game 1 of the Eastern Conference Finals Wednesday. Just when it seemed that Paul George would be the hero, LeBron James stepped up with a buzzer-beating layup to give Miami the one-point overtime win.

Afterwards, nearly everyone had the same question: where was Roy Hibbert?

Continuing a somewhat odd trend that began at the end of the Game 6 of the Pacers' second-round series win over the New York Knicks, Pacers head coach Frank Vogel took out his elite rim protector in single-possession situations late in the game. Hibbert had already sat once on a play near the end of overtime, and the Heat ran a 4-1 pick and roll (described here) to force a switch and get James a driving layup with no big man to step up. This time, Vogel pulled Hibbert with 2.2 seconds remaining, and James dove down the lane for an uncontested left-handed layup to give Miami the win.

Results-based thinking would therefore suggest that sitting Hibbert was a big mistake. Indeed, Vogel admitted that while the play broke down because the Pacers pushed up too high on LeBron, he'd use Hibbert if the situation came up again.

Problem is, coaches don't live in a results-based world. They can't pause the play, plop Hibbert in Sam Young's place near the rim and resume the tape. Just because Hibbert would have been in doesn't guarantee that he would have been in position to make a difference. We can't assume that Hibbert could have done anything to prevent the breakdown that allowed James to turn towards the rim in the first place. We also have to keep in mind that Hibbert's presence may have enabled one of the other options on the play to succeed.

There is little Roy Hibbert could have done to change No. 1 and No. 2 and it's somewhat debatable that he even could have mitigated the damage after the fact significantly better than Young did in No. 3.

Let's walk through the play to explain that point of view.

The Heat have the luxury of being able to play five shooters at once, and they used that on this play. Miami came out with Norris Cole, Ray Allen, James, Shane Battier and Chris Bosh. Battier threw in with David West on him. George Hill started on Cole, Young came in to guard Allen, Tyler Hansbrough was on Bosh and George, obviously, was on James. Here's the alignment. 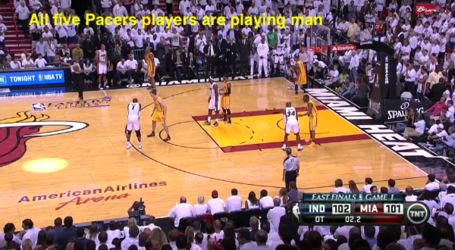 The first action of the play was a brush backscreen between Ray Allen and Chris Bosh. Allen faked a screen for Bosh to go backdoor, then sprinted to the left corner. Look at how the Pacers dealt with this part of the play. 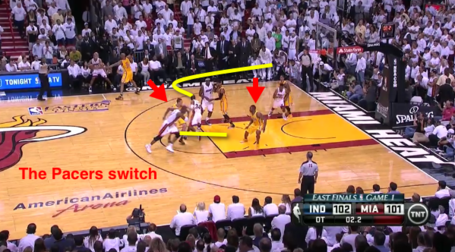 This is where folks need to address butterfly effect that would have occurred had Hibbert been in the game. Let's say that Hibbert is in there in place of Hansbrough, the most logical substitution. How does Hibbert deal with a situation like this?

Sticking with the same "switch everything" philosophy would never have worked. How could Hibbert be expected to chase Allen, one of the game's greatest clutch shooters, from the right block to the left corner beyond the three-point line? He doesn't have anywhere close to the mobility to do that.

What if the Pacers didn't switch and instead asked Young to fight through the screens? That's one option, but then Allen could easily have broken free for a good look. At that point, the Pacers would have been criticized for letting a player with Allen's reputation get a clean look. It's also worth noting that the momentary switch-or-no-switch confusion between Young and Hibbert, if in, could have left Bosh open for a lob pass. This is why most coaches advocate switching in late-game scenarios like this. It's just easier for players to process when making snap-judgment calls.

Another option is to essentially station Hibbert in an area under the hoop and play zone, but that would have left somebody open and wouldn't remove the problem of Allen having a significantly better chance of sneaking away from Young to get a look in the corner without an automatic switch.

There's also the possibility that the Pacers could have executed an elaborate series of switches that would have left Hill or even George on Allen, but those would have been far too difficult to execute in 2.2 seconds.

Those are your alternatives, and each presents drawbacks. Speaking in practical terms, it's far from a given that Hibbert would have actually been near the rim once we roll the play forward. If the Pacers kept switching everything, he actually would have been pulled to the corner. If they didn't, there's still a chance that gives Allen a little more space to catch, turn and get a good look because Young took time to fight through the Heat's screens he didn't have to fight through when the Pacers switch everything. These were risks that Frank Vogel was unwilling to take, and I understand that point of view.

The answer to both of those questions is this: the Pacers' plan to switch everything with Young and Hansbrough worked! (Though I agree with criticism No. 2 from a process standpoint.) 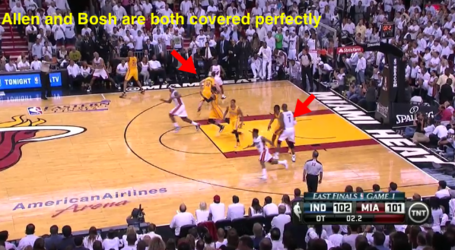 Think of this play in multiple parts. As James said after the game:

Lebron says he knew he only needed one dribble to get to the rim. Bosh 1st trigger w/a lob, Ray Allen at the corner was the 2nd trigger.

Triggers 1 and 2 were shut down by the Pacers' switch, which, as noted above, likely would not have happened with Hibbert in the game. If Trigger 3 -- throwing the ball to James and letting him do his thing -- is also shut down properly, the Pacers stop this play with or without Hibbert.

But obviously, Trigger 3 was not shut down properly. George bodied James the wrong way, allowing him to turn left and get to the rim with no help. This is George's breakdown, and there's nothing Hibbert could have done to prevent it.

Here are all the angles of George closing out to James' right, allowing James to turn to the basket. 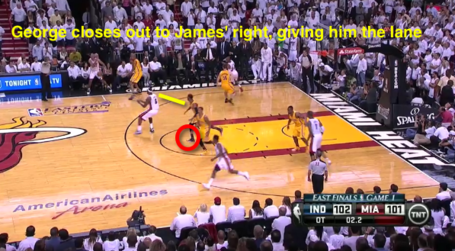 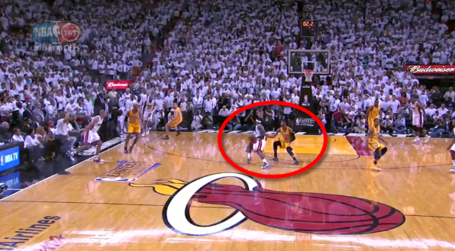 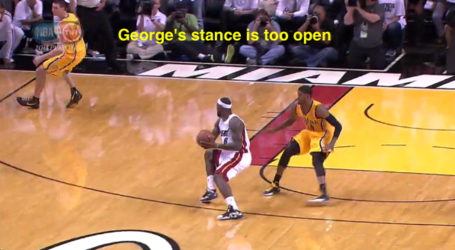 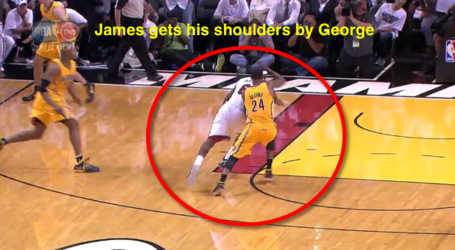 George expected James to catch and turn right, so he played him that way. Obviously, that was a big mistake. George didn't have any help going left, with Hansbrough correctly closing out on Allen and Young now with Bosh standing on the opposite side of the paint. For George to cheat like that was a massive error. He has to force James to catch going away from the basket.

All that is true with or without Hibbert in the game. Wherever Hibbert would have been situated, James going towards the basket is an incredibly scary scenario. The error is George's, and it's frankly a pretty basic one. As long as George plays that sequence remotely close to correctly, the Pacers don't give up a layup, the shot a rim protector like Hibbert is most likely to deter.

(One explanation for why George messed up: the Heat ran a similar play at the end of regulation and George switched onto Allen to contest his fadeaway game-winning attempt that missed. Instinctually, George was on high alert to watch Allen again if the Heat repeated the play. Notice where his eyes are as Allen runs by him on his way to the corner. 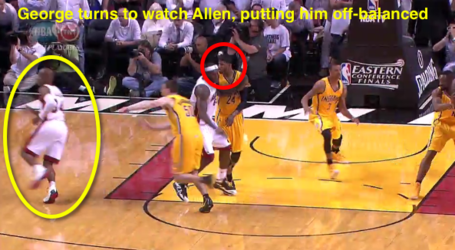 That is enough to divert his focus on bodying James the right way and in part causes the breakdown. Yet another reason why the real story here is Miami's brilliant play design.

Meanwhile, all James needs to do is dive down the lane for layup. It is true that Young, now the closest Pacer to the rim, does a horrible job of seeing the play develop and sliding over to potentially stop a drive. This is as big a breakdown as George's mistake. 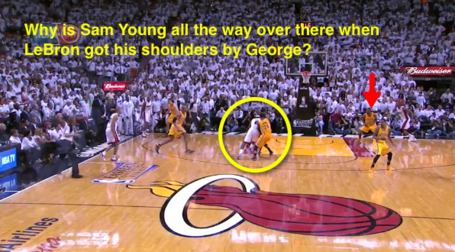 And yes, this is theoretically where Hibbert could have been instead of Young. But remember:

It's possible Hibbert would have been there, but it's nowhere close to an open and shut case.

All this said, I do understand the logic of wanting Hibbert on the floor, particularly in a macro sense. The Pacers defend a certain way that relies on Hibbert's rim-protection abilities, so why not trust it in a late-game situation rather than getting cute? There's something to that logic.

At the same time, there's also something to Frank Vogel's logic too. It's not enough to look at the outcome of the play and conclude that Hibbert would have actually been at the rim contesting James' layup. For one thing, the Heat may have instead found Allen open because Hibbert's presence made that trigger easier. For another, the mistake by George was so drastic that Hibbert's presence may not have made any difference even if he was somewhere around the rim.

I'm speaking in maybes because there's just no good way to know. There's logic in saying that not playing Hibbert was a mistake because he might have made a difference.

But if we're looking for reasons why LeBron James got a wide-open layup in overtime with 2.2 seconds left in an Eastern Conference Finals game, there are several others that played a bigger role than Hibbert's non-presence on the court.

• Flannery: No prize is guaranteed for Cavs