Game 1 between the Heat and Pacers provided plenty of memorable moments. Let's take a look back at a few of the best.

Share All sharing options for: NBA Playoffs 2013: 5 things that ruled about Heat-Pacers Game 1

AND THAT is why you never make assumptions about the NBA Playoffs. Contrasting styles are almost always great, physicality can provide more watchability than a bunch of alley-oops, and there's something to said for two fantastic coaches at the top of their games who aren't going to make any boneheaded errors in crunch time. Whoops.

Anyway, Game 1 between the Heat and Pacers, which ended in a 103-102 overtime win for Miami, was awesome. It was one of the best games the 2013 NBA Playoffs have given us yet, right up there with Game 2 of the Clippers-Grizzlies series, Game 4 of the Bulls-Nets series and every crazy game that predominately involved Stephen Curry going off for the Warriors. This was something not far away from an instant classic and it left plenty memorable moments and lasting takeaways. Let's investigate some of those:

Let's run through this real quick.

The Heat have the ball and call timeout with :24 seconds remaining with the score tied at 99-99 in overtime. The Pacers take out Roy Hibbert for Sam Young, because everyone knows you never want one of the best rim protectors in the NBA on the court in crunch time. This is Frank Vogel's logic and, unsurprisingly, LeBron James takes advantage of it. After a 4-1 pick-and-roll, LeBron's eyes light up when he sees George Hill is switched onto him. What is easier than taking candy from a baby? Because that's what LeBron did in driving to the cup for the go-ahead layup to put Miami ahead 101-99 with :10 seconds remaining.

After the great Paul George (more on him later) gets fouled on a three-point attempt and subsequently hits all three free throws like a boss, Miami gets the ball again at halfcourt with 2.7 seconds remaining.

The greatness of LeBron 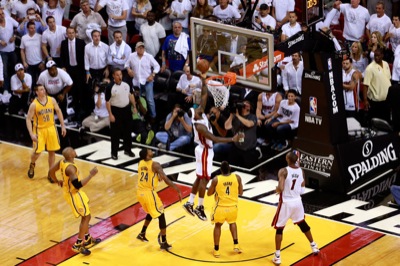 Paul Flannery on why his spin and layup should be the real story.

AGAIN Vogel chooses to sub-out Hibbert, this time for Tyler Hansbrough. This was especially crazy because the same stupid substitution just got his team burned, like, EIGHT SECONDS AGO. Twitter was up in arms over it, which is nothing particularly distinguishing but still noteworthy: this wasn't a case of second-guessing and hindsight being 20/20. Most people watching this game were confounded from the moment the Pacers took the floor without their awesome defensive center on the game's last possession.

You know what happens next: LeBron burns Paul George because he is LeBron and the rest of us are just flawed human beings, there's no rotational help to challenge the shot because Hibbert is on the bench, and the Heat steal a ridiculous victory in Game 1. Mike Prada has the full breakdown and you should read it. He argues that Hibbert's presence wouldn't have guaranteed a stop, and it's totally true. But still: the logic behind taking your best rim protector off the court in the game's final seconds, especially after doing the same thing *eight seconds ago* just got your team burned, is a little bit infuriating.

I feel for Pacers fans right now, because their team played a hell of a game. But back to that final play one more time, let's not discount one thing:

2. The Heat are masterfully crafted

Watching Kendrick Perkins kill the Oklahoma City Thunder during these playoffs, my colleague Jonathan Tjarks commented "If Scott Brooks was coaching the Heat, Joel Anthony would be starting."

This is true and it's the reason you have to appreciate the tactical genius of Erik Spoelstra and the Heat's front office.

As ridiculous as it was not to have Hibbert on the floor, you can sort of see what Vogel was thinking. Miami's lineup on that final possession was: LeBron, Shane Battier, Norris Cole, Chris Bosh and Ray Allen. Notice something about that group? All five can space the floor and hit an open three-pointer.

Much has been made of the Heat's makeover this year, an evolution that started when Bosh injured himself against the Pacers in the playoffs last year and Miami was forced to move to a small-ball lineup with LeBron at power forward. Whether the Heat stumbled into this accidentally or not, it changed everything forever. The last possession of Game 1 was a premium example of why.

As Prada detailed, watch all of the action that starts the play before Battier even makes the inbounds pass. There's a lot going on there, and a lot the defense has to notice. Screens and switches and all of that. What makes it all so scary from the defense's perspective is that there's no Kendrick Perkins on the floor. Any of those five dudes could have hit a game-winning shot from distance and it would have been over.

Credit the Heat for building and properly using a team that seems ahead of its time. Vogel still made what looks like an egregious error, but it only happened because Miami is so difficult to successfully defend.

3. Paul George, star in the making

Why Paul George is not a star.

Skip Bayless, bless his well-paid contrarian heart, tweeted this about two minutes before Paul George hit the single most ridiculous shot of the playoffs. It was a 32-foot three-pointer off a broken play that swished through the net with under one second remaining to push the game to overtime. It was fantastic:

Seriously: that is an insanely difficult, clutch shot from what might be the breakout star of this NBA season. What happened on Wednesday in Game 1 was simply a continuation of what's been developing all season: Paul George just being a monster, turning himself into one of the coolest players in the league.

George ended with a final line of 27 points, five assists and four rebounds on 7-of-16 shooting, which is impressive enough by itself. Factor in that he played 47 minutes and defended LeBron as tough as one can humanly defend LeBron, and George starts to look heroic. Then consider this: coming into the fourth quarter, George had nine points on 3-of-8 shooting.

Dude did what great players do: he turned it on in the fourth quarter. When the Pacers played the Bulls in the first round of the 2011 playoffs, the common refrain was that Indiana was more goon than good, a phase highlighted by the existence of Jeff Foster. Not anymore. Indiana has a star, and his name is Paul George.

After the game, he also wore a pretty dope shirt:

Those are the immortal words of Andrew Sharp, and they are no less true now than they were during the NFL season. But still: there's something totally hilarious about a good percentage of Miami's crowd getting up and leaving after George knocked down his free throws and before LeBron would rescue the win with his buzzer-beating layup.

I'm sure there are plenty of good reasons to beat the traffic in Miami on a Wednesday. "Party in the city where the heat is on / All night on the beach 'til the break of dawn." Sure. I get it. I owned "Big Willie Style", too. But that doesn't make this any less funny.

Buzzer-beating shots in the playoffs are a thing to be celebrated. Unless you're the baddest man on the planet, I guess. When LeBron made the layup to give Miami a Game 1 victory, everyone was going crazy. Everyone expect LeBron.

Look at the reaction in the heat of the moment. Stone-cold. 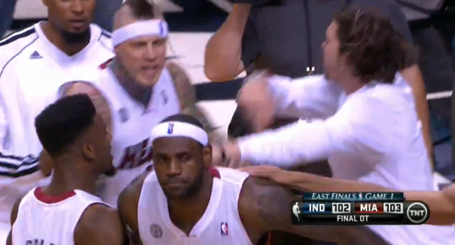 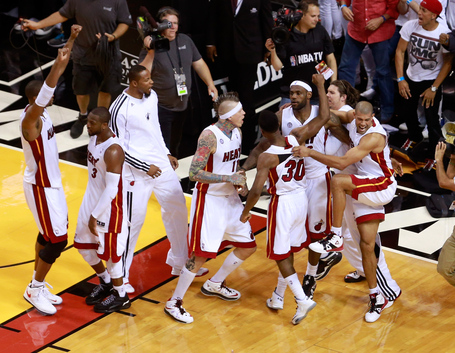 LeBron was put on Earth to do this, which is why it impresses everyone except him. You realize he finished with a triple-double last night, right? The man dropped 30 points, 10 rebounds and 10 assists, and much of the in-game chatter focused on how great a job George was doing defending him.