The wackiest picks of the 2013 NBA award season

The NBA, where Luke Babbitt receiving props happens. Here is a list of the strangest NBA award votes of the year.

Share All sharing options for: The wackiest picks of the 2013 NBA award season

The NBA's system of selecting award winners isn't perfect. It's not expected to be. Not all sportswriters on beats know the ins and outs of the other 29 teams. Neither do coaches, believe it or not. Opinion is of course involved, as is the subjective nature of what each award means. For example, is the MVP the best player in the league or the most valuable one helping his team win?

Still, sometimes it's pretty obvious that care isn't taken when the votes are placed. When a voter doesn't take the time to Google whether Ryan Anderson in fact had pretty much the same stat line this year as last before voting him the Most Improved Player, we have a problem.

That vote, along with a few others, make up our list of the weirdest single votes

Jordan Crawford and Luke Babbitt, Sixth Man of the Year

Luke Babbitt must have done some work in the 11.8 minutes per game played. Nope. The Portland Trail Blazers' forward averaged 3.9 points and shot an abysmal 36.8 percent from the floor whenever he got the rare opportunity of court time. Babbitt, who garnered a third-place vote, was less a shot in the arm for his team and more of a shot that wasn't disinfected. Anyway, there's no excuse for that vote.

There might be an excuse for a voter to pick Boston Celtics guard Jordan Crawford. Might being the key word. Playing a bigger role with the Wizards to start the season, he was posting decent averages of 14.7 points and three assists per game. That production fell off when he was traded to Boston and rode the pine. But one theory is that the writer who picked him as the Sixth Man of the Year -- it was worth five points -- actually meant to vote for the Clippers' Jamal Crawford, who was a legitimate candidate that finished second in the voting. We hope that's the reasoning.

J.J. Hickson averaged a double-double in a breakout season, and if anything proved to be a nice pickup for the Portland Trail Blazers. But to nab one All-NBA Team vote? Let's just deduce this by who is in front of him at the center spot.

Luke Babbitt voter is our hero 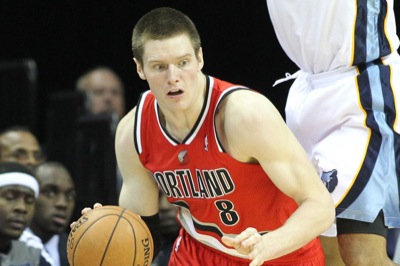 Why now is time for voter transparency

Tim Duncan, Marc Gasol and Dwight Howard make the first, second and third teams respectively. To say Hickson should earn a single nod over any of those three seems ludicrous. But also look at who else could arguably slide into the first three slots: Brook Lopez, Joakim Noah, Al Horford, Tyson Chandler, Al Jefferson, Larry Sanders and Roy Hibbert are all considered better big men than Hickson.

Heck, Omer Asik played on a winning team and the Nikolas (Vucevic and Pekovic) could spark a "Who's better?" discussion between themselves and Hickson.

Somebody was lazy. Ryan Anderson received a single first-place vote as the NBA's Most Improved Player, but a quick jet to his stats page indicates that he was pretty much the same guy for the New Orleans Hornets during 2012-13 as he was for the Orlando Magic the year before, when he actually won the award. His scoring average of 16.2 improved by just 0.1 per game, his field goal shooting dropped by 1.6 percent, and his rebounding totals dropped by 1.3 per game.

Ryan Anderson "is who he is," as they say, and he's a pretty solid player. But he wasn't improved.

We've already discussed the Boston Globe's Gary Washburn, who was the only one to steal a vote away from LeBron James. Think of that what you will.

It's easy to pick on whomever voted for David Lee in their fifth slot for MVP because there is no more obvious proof of a player's absence not mattering a whole lot than Lee's. After he suffered a torn hip flexor in the playoffs, the Warriors didn't skip a beat. By definition, that makes Lee seemingly of little value. Actually, Lee's injury arguably helped the Warriors advance to the Western Conference semifinals, where they fell in a pretty competitive series to the San Antonio Spurs.

When headlines are titled "Are the Warriors better off without David Lee?" and Lee's awful defense is the topic of a research paper that highlighted the Sloan Sports Analytics Conference, it's hard to see where Lee fits in the MVP mold.

Oh, and then there's that Stephen Curry guy on Golden State, who appeared to be pretty dang important to the team's success.

Kevin O'Connor and Dell Demps, Executive of the year

Two people voted for the Utah Jazz's Kevin O'Connor as the second-best NBA executive, giving him six total points. It's surprising because the Jazz hardly did much other than pick up options of young talents Gordon Hayward, Derrick Favors and Enes Kanter. The Jazz didn't get anything in return for either Paul Millsap or Al Jefferson at the trade deadline despite one of the two likely being gone as a free agent this summer.

O'Connor had already handed the keys to new general manager Dennis Lindsey before this season, so who knows if he's had much say in the day-to-day happenings as the vice president of basketball operations.

Demps is also a questionable choice to have earned one vote. He has set the New Orleans Pelicans up for a rebuild in terms of cap space, but he also signed often-injured shooting guard Eric Gordon to a max contract last summer and so far has whiffed on the Austin Rivers draft pick. It's hard to give credit for the Anthony Davis selection -- that seemed pretty obvious.

Hidden on the list of the league's many great defenders was Mike James, who earned two points by way of a single first-team vote for the All-Defensive squad. The vote is questionable because the Dallas Mavericks point guard only played 45 games, playing 20 minutes per and averaging 0.6 steals in that time. According to the NBA.com stats tool, James was in between the 200th-best and 300th-best defender by individual points allowed per 100 possessions.

Think of the company alongside James among the players that earned a couple nods for their defensive capabilities. He had as many points as the Indiana Pacers' George Hill, the floor general for the NBA's best defense, who must defend arguably the toughest position in the league. James earned more points than San Antonio defensive savant Kawhi Leonard, Minnesota's Andrei Kirilenko and New York's Iman Shumpert, among others.

This list isn't all bad voting. It's partially due to the fickle nature of the must-win attitude NBA executives hold over their coaches' heads.

The first two coaches on this list earned both first- and second-place votes for eight total points but are now without jobs. Drew, who has not been relieved of his duties for the Atlanta Hawks but who will almost assuredly not have his contract extended past June 30, earned first- and third-place nods. Carlesimo is probably the biggest question-mark here. Del Negro got the boot for the Clippers at the suggestion of Clippers players, but the Brooklyn Nets' coach got thoroughly outcoached by Tom Thibodeau and the less-talented Chicago Bulls in the playoffs.