How good was Chris Andersen for Miami in Game 1? All there is to say is Birdman, Birdman!

Chris Andersen played a perfect game for the Miami Heat in the opening game of the Eastern Conference Finals. He scored 16 points on 7-of-7 shooting, had three emphatic blocks and grabbed five rebounds (three offensive) in 18 minutes.

How was the Birdman so effective for the Heat? Simply put, he knew his role. Because he knew his role, his teammates knew what to expect and were able to find him throughout the game. His shot chart shows he played with a clear understanding of what he needs to do for Miami -- play at the rim. 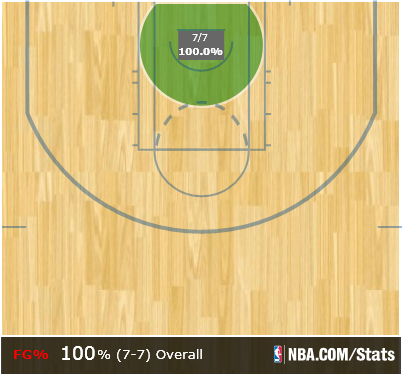 LeBron James' ability to get through the Pacers' perimeter defense is going to be an issue for Indiana. The Pacers' defensive strategy to use Roy Hibbert or Ian Mahinmi as defensive anchors to meet James at the rim may not work as well as it did against Carmelo Anthony and the Knicks because of James' passing and Andersen's cutting.

For more on the Heat visit Hot Hot Hoops

Here, James drives around David West and Hibbert lurks at the rim while Andersen waits in the corner. Andersen isn't a floor-stretcher, so Hibbert cheats away from him to be the Pacers' last line of defense against James.

When Hibbert rotates over, Andersen cuts to the rim and James passes to him. Andersen is ready for the pass, which is an underrated, but important, aspect of his game. He knows what to expect from James in that situation, and because of his awareness, gets a clean dunk on one of James' ten assists.

Five of Andersen's seven field goals came from cuts to the rim after the Pacers rotated away from him. James assisted on three of those cuts, but Norris Cole and Dwyane Wade also pulled the defense into the paint and found Andersen:

The Heat need Andersen to be on the floor to help defensively on Hibbert, and even though he isn't the floor spacer that Chris Bosh can be, Miami was still able to use his skill-set in their offense.

James isn't always going to pass to a cutting Anderson while driving to the rim, but Andersen can be an asset on the offensive glass. James will miss the layup as he tries to maneuver around Hibbert. Success for the Pacers?

Not quite. Andersen is under the rim and in front of Indiana's defense. He positions himself well and his activity around the rim pays off as he tips in James' miss.

Whlie Hibbert did force a miss from James, he also had to move out of position to recover and grab the rebound.

Andersen's energy was also important for Miami while changing ends. Here, he blocks Lance Stephenson and the Heat push the ball in transition.

Wade and James both draw the Pacers into the paint while Andersen runs the floor. Wade hits Andersen with the pass and he finishes in stride.

Andersen was key in the Heat's Game 1 victory. In a tight game against one of the best defenses in the league, Andersen made all seven of his shots and played his role to perfection.

Really, all that's left to say is Birdman, Birdman.