Michael Jordan doesn't think LeBron James finishes well at the rim when he goes to his left. James disagrees with the scouting report, as do the Pacers after Game 1.

LeBron James doesn't finish well at the rim when going left? That's what Michael Jordan said in the scouting report he gave to ESPN's Wright Thompson earlier in the year.

Would Hibbert have made a difference? 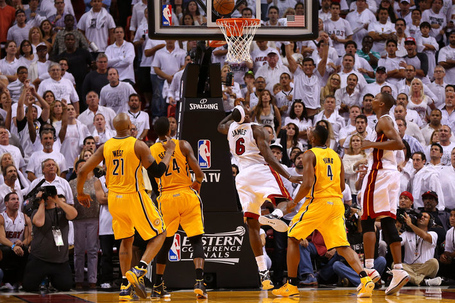 James picked up a thrilling overtime victory at the buzzer in Game 1 of the Eastern Conference Finals against the Indiana Pacers by finishing at the rim while going to his left. Brian Windhorst of ESPN reports that James called out Jordan's "left-hand theory":

"That theory is wrong, I guess," James said of the Jordan report.

James plays basketball right-handed but writes left-handed. Over the years he's gotten better going left, though at one time it was indeed considered one of the weaker parts of his game.

Here's James' game-winning layup where he finished with his left hand, after driving left against Paul George, with only seconds left in overtime:

If the Pacers agreed with Jordan's evaluation prior to Game 1, they have every reason to disagree after losing to James' left hand in overtime. The NBA's MVP can not only drive to his right or left, but he can finish with either hand, too. Go figure.