Heat vs. Pacers, Game 3: Finally, Miami is under pressure

The Pacers have forced LeBron James and the Heat into a tight spot for the first time this postseason. Can Miami respond?

Share All sharing options for: Heat vs. Pacers, Game 3: Finally, Miami is under pressure

The only thing more exciting than a superstar at the height of his powers is when a challenger emerges from the shadows to stake his own claim. That’s the emerging storyline from the Eastern Conference finals where the upstart Pacers led by dynamic forward Paul George have played LeBron James and the defending champion Heat to a draw with the series shifting back to Indiana. With a little luck, and some better late-game coverage, the Pacers might actually be holding a 2-0 lead going into Sunday’s Game 3.

George has been fantastic in the two games, scoring 49 points and handing out 11 assists while shooting 50 percent from the floor. He emerged as an All-Star this season, but this series has truly been his introduction to the world.

He made two signature plays that showcased his versatility as an up-and-coming scorer. There was the smooth 30-footer at the end of Game 1 that sent the game into overtime and then there was his levitating, crushing jam on Chris Andersen in Game 2 that sent the Internet into spasms of delight. Both were awesome displays of his grace and power.

Few players have challenged LeBron’s hegemony so directly, and James even acknowledged George’s ascent with a welcome-to-the-club dap at the end of the third quarter in Game 2. There was some predictable grumbling from the masses after that move, but let’s remember that after Michael Jordan dropped 63 points on the Celtics in 1986, Larry Bird suggested that God himself wore No. 23 and Magic Johnson welcomed Isiah Thomas to the Finals with a brotherly kiss.

It’s the circle of NBA life. Get over it.

We’ve been massive supporters of George’s play this season, but let’s be clear about where this matchup stands. While George has done much of his damage against Dwyane Wade on the offensive end, LeBron has averaged 33 points, 9 rebounds and 6.5 assists working primarily against young Mr. George. 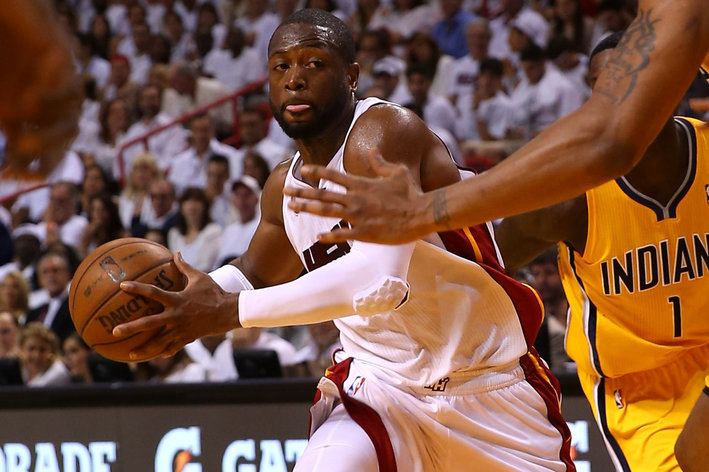 Tom Ziller looks at Wade's 2013 postseason performance, which is nothing like it has been in recent years. Can Wade get better or will the Heat be forced to win without him?

His turnovers at the end of Game 2 were a result of strong adjustments made by Frank Vogel and he's earned the right to make mistakes and learn from them. The smart money says he will, regardless of what your narrative says.

Miami’s problems run way deeper. It’s the rest of LeBron’s supporting cast that have faltered, and at this point that’s exactly what Wade, Chris Bosh and the legion of shooters and role players that make up the rest of the Heat roster have become. As a measure of Miami’s dependence on LeBron, the four-time MVP has played almost 92 of a possible 101 minutes in the first two games.

Wade has been decent statistically with 33 points, 12 rebounds and 10 assists in the two games, but he is a far cry from the player who turned it on in last year’s playoffs. Bosh has battled foul trouble thanks to Roy Hibbert, the other emerging force in this postseason, and the Heat have no one else who can legitimately guard the 7-foot-2 center.

Additionally, Miami’s small lineups have no answer for David West and George Hill was back to his usual solid, steady self in Game 2. The Heat shooters -- Ray Allen and Shane Battier -- have combined to make just 3-of-20 and are 1-for-12 from behind the arc. Energetic backup point guard Norris Cole has turned back into a pumpkin.

The Pacers have been crowing a bit about how their five-man approach is the perfect antidote to Miami’s Big Three. With the obvious of exception of LeBron, they have won most of the other individual battles and it’s a measure of James’ greatness that the Heat aren’t in more trouble now than they already are.

This will ultimately be another LeBron referendum because that’s how these things work, but it’s starting to feel an awful lot like 2009 when the deeper Orlando Magic bounced the James-dependent Cavs in the conference finals.

The Heat are better than those Cleveland teams. They’ve accomplished more and have longer track records. They were down 2-1 against the Pacers and reeled off three straight wins. They were down 3-2 against the Celtics and took Game 6 on the road. It’s not time to panic yet, but it is time to reassess.

The gauntlet has been thrown down and for the first time this postseason we eagerly await Miami’s response.

Here’s where some of this falls to Erik Spoelstra to juggle his lineups and resist the urge to continue riding with some of his combinations that have been incredibly productive up to now. Loyalty is one of the great attributes of a successful NBA coach, but a short memory in the playoffs is even better.

Udonis Haslem has given them nothing. Mike Miller might give them a boost. One way or another, the shooters have to make shots and Spoelstra has to find some way to bring Hibbert away from the basket and deal with him on offense.

The Pacers will just keep coming with what they have, which is part of their endearing charm. They haven’t wavered throughout this postseason even after the Game 1 trauma that could have ripped apart other inexperienced teams. There is no mystery about Indiana’s approach and there is comfort in that familiarity.

It seems odd to say, but the next two games will reveal more about the defending champs than the emerging contenders. Either way, the gauntlet has been thrown down and for the first time this postseason we eagerly await Miami’s response.

• The Nets, a coaching search and loads of cash