The equality of defense and Tony Allen as part-time star

If we really want to give defense the respect it deserves, isn't Tony Allen a star?

Share All sharing options for: The equality of defense and Tony Allen as part-time star

Because the box score is such a limited thing, we have for so long failed to give defense the credit it deserves in the NBA. Defense was always spoken of in clichés -- it wins championships, it's 90 percent effort, etc. It was seen as important, of course, but on an individual basis, we often ignored it because we couldn't measure it well. So, our biggest stars were almost universally elite scorers or passers. (Big men were also required to rebound and provide something that looked like good defense, usually via blocks.) The world recognized defense as important, but that hardly translated into player judgment.

The world recognized defense as important, but that hardly translated into player judgment.

Steve Nash has long been a brilliant offensive maestro who can't defend a lick. He won two MVPs and made eight All-Star games as a totally skewed star. But unless you're a big man, it only goes that direction. Star-level defensive guards and wings don't get that level of respect. Bruce Bowen never made an All-Star team, let alone eight. And Tony Allen -- a back-to-back first team All-Defense honoree despite playing 26 minutes per game, those short minutes coming due to very limited offense -- is going to hit free agency looking at a far smaller salary than worse players who happen to skew the other direction (offense over defense).

Here's a prime example: J.R. Smith. He's a free agent this summer. He's a good scorer, and for a few months this season, he was even pretty efficient. He's not a good defender, though he can pick up some steals. He's definitely skewed offensively. He'll almost assuredly sign a bigger deal than Allen will. Even though T.A. is clearly a defensive star while Smith is a solid offensive player. This is a league where solid offensive players make more than defensive stars (again, excepting centers).

If Allen played more minutes and defense were really seen as equal to offense, wouldn't T.A. be as touted as Denver-era Carmelo Anthony? Melo was a brilliant scorer who didn't defend to George Karl's liking, with "effort" the repeated buzzword then. Melo made repeat trips to the All-Star Game and landed max deals. T.A. is making $3.3 million this season.

Of course, defense is cheaper than offense as a rule. Perhaps part of it is that coaches, in theory, can do a lot more to help a defense than they can to help an offense. Perhaps part of it is that good defense requires a team effort, whereas good offense can be left to fewer players. I'm not sure that's totally accurate -- the best defense in the league (Indiana) has two elite defenders in the starting five (Paul George, Roy Hibbert) and three other good ones. The best offense in the league (Oklahoma City) had three very good to elite offensive players (Kevin Durant, Russell Westbrook and Serge Ibaka). All of those questions relate to how a player like Allen -- an avatar of this whole issue -- will be treated in free agency. 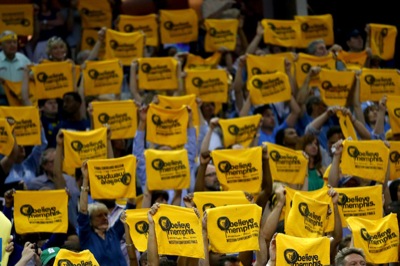 As in, if the Grizzlies don't make a hard push to retain him, what type of team will go hard after him? He's been named the best defensive two-guard in the NBA two-straight years. Will a team try to sign him as their new starting two-guard? (The Clippers and Hawks seem like proper fits for this strategy.) Will a team go after him as a third guard who can change the pace of the game with his pressuring, turnover-creating defense? (If the Knicks let Smith leave, this would be a suitable move. The Rockets and Wizards fit, too.)

T.A. is a pretty weird case, all told. He's a low-mileage player (12,000 career minutes), but he's 31. He's a little eccentric. His offense is a) transition layups and b) cuts off the ball. He's much better with a pass-first point guard, but he needs to play on a team with shooters at the other perimeter positions because he, a shooting guard, is not a shooter. (At all.)

Perhaps a better test case for our theory is Avery Bradley, who will be a restricted free agent in 2014 if the Celtics don't ink him to an early extension by opening night of next season. Bradley isn't much other than a fast-break threat on offense, but made second team All-Defense despite playing just 50 games this year. He's a slightly better shooter than T.A., comes with a bunch less crazy and can sort of play point guard without getting many assists. Otherwise, he fits the profile we're looking for here: a heavily skewed defensive star.

Will he be treated like the one-way stars of the opposite style? I remain skeptical.