Heat vs. Pacers, Game 4: The night Indiana grew up

With ample opportunity to flinch, the Pacers instead stared the Heat in the face and survived. Indiana is not bluffing.

Share All sharing options for: Heat vs. Pacers, Game 4: The night Indiana grew up

The Pacers are not scared. That much we know after four games of the conference finals that have seen them get the better of the defending champs twice and play them practically to a draw in another. They weren't frightened after the buzzkill of blowing Game 1 and they apparently weren't worried after getting crushed in Game 3 on their home floor.

There were many times in Game 4 when the Pacers could have caved. Whether it was a handful of bad calls or a pair of killer LeBron James threes, the Pacers could have collectively shrugged their shoulders, decided it wasn't their time yet and begun planning their summer vacations. Hey, it's been a great run regardless of how this thing turns out.

Instead, not only did they refuse to surrender, they continued hammering away down low. That was the important part on Tuesday, because while Paul George was battling foul trouble and Lance Stephenson was going batshit crazy (in a good way), the Pacers didn't deviate from their gameplan.

Under the most extreme pressure, they continued to press their advantage down low and on the boards. To put it another way: this was the night the Pacers grew up. It's one thing to play up to your potential and beat lesser or evenly matched teams in the lower rounds. It's quite another to look the champs in the eye on this stage and not blink.

George has received the majority of attention this series and it's all been deserved, but Roy Hibbert is the player who makes them legitimate. His defense has been a given, but he's shown a versatile, albeit occasionally awkward, offensive game that even his biggest admirers didn't know he had.

With hook shots and soft-touch putbacks, Hibbert has abandoned his still developing mid-range game and parked his big self under the basket. He's too massive for Miami to move him out of there and when Chris Bosh turned his ankle, the Heat lost the one post defender who could at least bother the big fella.

Hibbert had 23 points and 12 rebounds, and along with David West's dozen boards, they completely controlled the glass (49-30) and outscored the Heat by 18 points in the paint.

A weekend with the Grizzlies 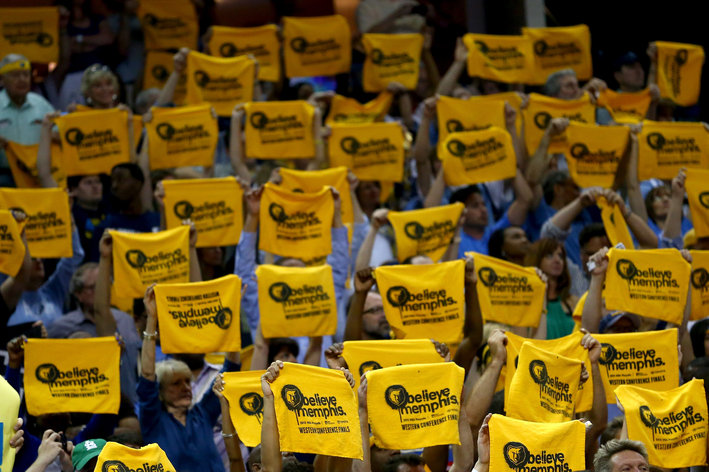 A team rarely ever truly represents a city, but Spencer Hall writes that the Grizzlies — and Memphis — weren't normal in the least.
See the full story

We've learned quite a bit about Indiana this series, but perhaps more importantly, the Pacers have exposed the Heat for their LeBron-dependence. When James fouled out late in the game after banging home yet another long three, it was all over. Miami didn't just lose its best player, it lost its entire equilibrium.

The whole point of The Decision was joining forces with other like-minded talents, but three years into this great experiment, LeBron is back in Cleveland, just with bigger names attached to the supporting cast. With Bosh hobbling and Dwyane Wade struggling to make layups, the Heat got a big game out of only one other player, the much-maligned Mario Chalmers.

It's worth pointing out that despite all that -- plus the lack of a vintage LeBron game -- the Heat still had a chance to steal a game on the road. Anyone who thinks they're in big trouble hasn't been paying enough attention.

But they are in a series, and if it feels familiar, it's because the Pacers have picked up the tough-minded mantle from the Bulls and Celtics. They've made it clear both with their words and their actions that they're not in awe of Miami or willing to engage in the endless mind games.

There is a psychological advantage to being immune to the moment, as Stephenson apparently was after willingly guarding James and continuing to assert his own wild-eyed offense. As personified by Stephenson's last-second heave at the end of the third quarter that sent the Indiana crowd into delirium, the Pacers are just scary enough to be dangerous and just confident enough to maybe be something more.

• Spencer Hall: A weekend in Memphis

• Sweeping Spurs, and things to do in San Antonio