The argument for paying your general manager lots of money

General managers usually make less than coaches, and $3 million is seen as a crazy salary. What's wrong with this picture?

Share All sharing options for: The argument for paying your general manager lots of money

NBA players largely make much, much more money than their coaches or general managers. That's not surprising -- elite basketball skill is more rare and more valuable than the skills involved with coaching or generally managing. NBA payroll rules actually warp the player payscale to fit the league's needs. Without max salaries, minimum salaries and the like, few players would be paid a lot more (LeBron would easily make $50 million) and many players would make much less. (There would be massive competition among fringe NBA players even if the minimum salary fell to, say, $100,000. It's currently around $500,000 for rookies and above $1 million for most veterans.)

There are no restrictions -- floors or ceilings -- on pay for coaches and GMs, and the theory of vast pay inequality has largely not come true. These days, most GMs are grouped around $1-3 million annually. (It should be noted GM salary is reported sporadically.) Most NBA coaches make $2-5 million. Occasionally, a coach will break through the ceiling; Phil Jackson made $11 million in his final season in L.A. But even the current elite are seemingly capped at about $7 million, despite there being no restrictions on salary committed to these positions.

A few weeks ago, it looked like spendthrift Mikhail Prokhorov might use his fortune to try to pry his desired coach -- Doc Rivers -- from the Celtics. This should happen a lot more, and the fact that it doesn't almost makes me believe there's an unspoken agreement among team owners to tamp down administrative salaries. You almost never see head coaches get poached. Is it because they don't matter? No. Is it because they are all the same? Can't be. It's a strange phenomenon.

Ujiri: worth every penny 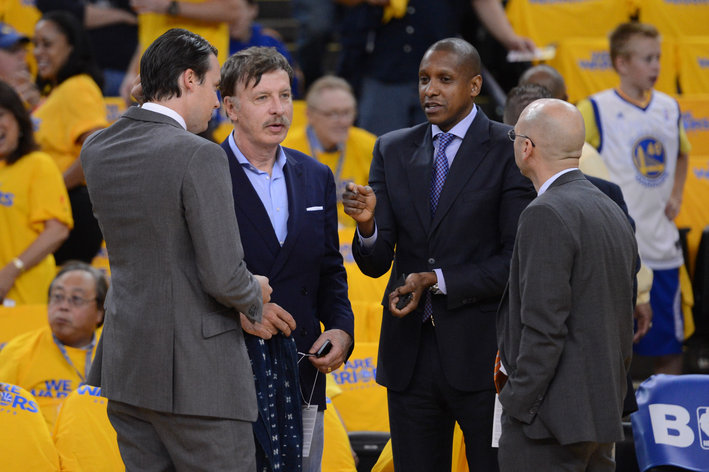 Nate Timmons of Denver Stiffs explains why the Nuggets need to break the bank to keep their GM.
See the full story

But the issue as it relates to GMs is even stranger. A bad GM can cripple your franchise for years. A good GM can build a contender. While players matter in the end, GMs determine which players you have! It's a fantastically important role, one I'd argue is in most cases far more important than the head coach. (And it's getting more important as salary cap rules become more complex and technology like easily accessible film [Synergy] and expanded tracking [SportVU] evens the scouting playing-field to some degree.)

Yet GMs make even less than coaches!

Consider that the Raptors' "huge" offer to Masai Ujiri -- WHO JUST WON EXECUTIVE OF THE YEAR -- is $15 million over five years. That's competitive with a mid-rung coach. The best executive in basketball last year -- the guy who turned Carmelo Anthony into Danilo Gallinari, who turned Nene into JaVale McGee, who turned Arron Afflalo into Andre Iguodala, who inked Ty Lawson to a sub-max deal, who built one of the better starless rosters we've seen in a while -- is getting an amazing deal worth ... $3 million per year?

What's worse is the possibility that the Nuggets won't match it because it's too rich.

So, a team spending $60-75 million on player payroll thinks the difference between the $1 million or so it is paying Ujiri now and the $3 million he's trying to get is too great to swallow. That's totally insane. Denver should be thrilled that the market price of an elite GM is so low. If the Nuggets have a budget for front office staff and matching Ujiri's Toronto offer would blow it up, rewrite it. In fact, teams should accept that GMs and coaches are more like players than sales account executives. There's a general salary scale, but market prices prevail. It's like off-season lobster.

Perhaps we'll never see an era of celebrity GMs, but it seems crazy to not view them as basketball-specific talent as we do coaches and players.

• Dwyane Wade is hurting the Heat

Raptors hire Masai Ujiri away from Nuggets, according to report