NBA Playoffs: There's a mouse in the house for the next 30 years

The Heat started a trend last year, and with other contenders copying the blueprint, there's a new kind of chess match happening all over the NBA Playoffs.

Share All sharing options for: NBA Playoffs: There's a mouse in the house for the next 30 years

OK hold on a second: Did we all know that in years past, when NBA forwards had a mismatch against a smaller player down low, they would yell out "There's a mouse in the house!" to call for the ball?

Because Charles Barkley said this exact phrase last week on TNT to describe Serge Ibaka battling smaller players on Houston, and Jeff Van Gundy said the same thing during the Knicks game Sunday. And if it's true that past Hall of Famers were screaming about mice on the basketball, this seems like something we should all be celebrating. It makes me want to go post up a fifth grader right this very second just so I can yell out "WE GOT A MOUSE IN THE HOUSE!" and feel like Charles Barkley in 1993. But we digress.

There are mice all over the place in the NBA Playoffs.

Because this is what the NBA Playoffs are going to look like for a long time. There's a reason two announcers have mentioned "Mouse in the House" in the past seven days. There are mice all over the place in the NBA Playoffs.

The rise of small ball in the NBA has created a landscape where certain teams refuse to go small, others thrive that way, and when they collide, the interplay of the two styles and all the mismatches goes a long way toward deciding things. The most famous example would be the NBA Finals last year, when the Thunder refused to bench Kendrick Perkins and go small, and it ended up killing them as they lost four straight games to Miami. Since then, Miami's perfected the blueprint while some other contenders have embraced it elsewhere.

What's amazing is that, at least on some level, the small ball revolution caught on by accident. When Chris Bosh went down with an abdominal strain during the last year's playoffs, it left Miami scrambling for a Plan B, and for a minute there, it looked like the Heat were doomed.

They were down 2-1 against the Pacers this time last year, with Game 4 looming in Indianapolis and 100,000 different sportswriters were wondering if this was the end of the Miami Heat experiment. Then, Game 4 happened. Dwyane Wade had 30, nine, and six, and LeBron James scored 40 points and grabbed 18 rebounds -- eighteen -- for a win that basically saved their season. This gave the Heat a lifeline in the short term, but as they perfected playing small and LeBron got more comfortable playing the hybrid power forward position, a newer, better offense basically came out nowhere, annnnnnd ... we know how that ended.

Now, half the teams left in the playoffs are playing this way. The Knicks, Warriors, Heat and even the Thunder, who bounce back and forth between big and small.

This is just the beginning. The hybrid wing/forward superstars are only going to be more ubiquitous as we go, and as the NBA gets faster and more wide open, we'll have more and more teams trying to beat people with speed. And then others countering with power.

How Hibbert thwarted the Knicks 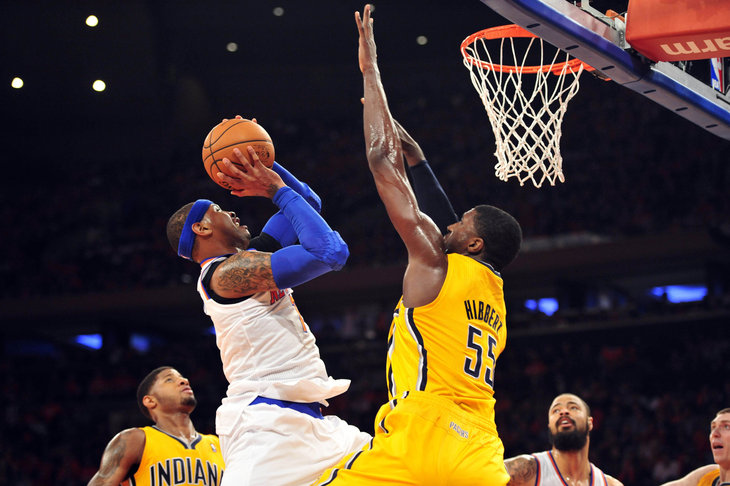 Mike Prada breaks down the Pacers' defense in Game 1.

That's what makes it fun. Countering with power didn't work for the Pacers against the Heat last year, but it worked for the same Pacers team against the small-ball Knicks on Sunday. Roy Hibbert patrolled the paint, was able to stay out of foul trouble and the Pacers D frustrated the Knicks all day. Then, on the other end, the Knicks had no answer for David West, Hibbert and Paul George. Likewise, the Grizzlies just won four straight games against the Clippers by beating the crap out of a smaller, faster L.A. lineup.

Sometimes, power still beats speed. Yeah, you could point to the past two champions (Heat, Mavs) to highlight smallball's stranglehold on everything, but the two champions before that (Lakers, Celtics) were the exact opposite. The game hasn't changed as much as it seems; the Heat distort everything because LeBron James is just that unstoppable.

For all the talk of the Heat blueprint revolutionizing basketball, that's only half the story. The real "revolution" is this new battle between styles that we're going to see over and over again. Grantland's Zach Lowe has already highlighted this trend in these playoffs. It's a new kind of chess match between teams with different personnel strengths, where officiating and lineup management become twice as important, and we all have twice as much to overanalyze between every game of every playoff series.

When you think about it like that, the "Mouse in the House" NBA is pretty much perfect for 2013. We have 10,000 different people on the internet scrutinizing adjustments and coaching and lineups every day during the playoffs, and suddenly this stuff matters more than ever.

And really, as more teams catch on, it's only going to get more insane over the next few years. There's gonna be mice EVERYWHERE.

Now, a few other thoughts on the NBA Playoffs from the past few days.

God, that was a big win on Sunday.

The Thunder Are Alive. God, that was a big win on Sunday. Obviously, Game 1 is huge in any series, but for OKC, Sunday's win was as much about proving to themselves that they can hang with Memphis as it was about holding court at home. We've come a long way from Game 5 against Houston. As the second half unfolded in that one, nothing was working, everyone was frustrated, and watching them getting ground up by the Rockets, you couldn't help dread the disaster that was waiting in a potential Memphis series.

Then... Kevin Martin went off in Game 6 and again in Game 1, Kevin Durant hit another level in the second half Sunday, and it ended with this game-winning shot. (IT'S SO BEAUTIFUL.)

It sounds cliche and sportswriter-y to say this changes OKC's mindset somehow, but for a team that badly needed something to go right, that comeback Sunday could go a long way toward restoring some of the confidence they lost with the Westbrook injury. Memphis is still the favorite to win this series, but who knows? Betting against the Thunder felt much safer a few days ago.

All Hail Joakim Noah. For his performance in the Nets series, for this interview at the Final Four in 2007, for supporting Derrick Rose while the rest of the world goes insane and for generally being the greatest at all times. Noah used to be the one of the more hateable superstars in basketball -- both at Florida and early in the NBA -- but given all the evidence and spectacular finger gun gifs like this, I don't know how anyone on earth can not love him.

Don't Forget Paul And Lance. For all the praise Roy Hibbert's defense has gotten in the past 24 hours, both these stats are also incredible:

Paul George held Carmelo Anthony to 5-for-18 shooting and J.R. Smith to 0-for-7 shooting in the Pacers Game 1 win

The Knicks shot 69% with Lance Stephenson OFF the court, but only 38% in the 39 minutes he was ON the floor

The JR Smith Experience Will Never Get Old.

The man, the Smith, the legend. RT@therealjrsmith: First an for most I wasn't clubbing before the game so y'all can kill that.

I hope JR Smith remains a Knick for the next 50 years.

The Kendrick Perkins Experience is getting old. It's not that he's terrible, and he's probably most valuable to OKC against Gasol and Randolph in this Memphis series. But particularly given the PTSD Thunder fans still have from last year's Finals -- when Perkins was apparently playing with a torn groin and Scott Brooks still wouldn't bench him -- Brooks' refusal to go with Nick Collison for extended stretches may actually cause a riot in Oklahoma City over the next week or two. Sometimes it seems like Perk would have to stab Kevin Durant before Scott Brooks ever agreed to cut his minutes in half.

The offense is more dangerous with Collison on the floor, Collison's a smart and capable defender, and at a time when OKC's offense needs all the help it can get, now seems like as a good a time as any for Brooks to shake things up. So far, the results have been mixed. He apparently forgot Collison existed in the middle of the Houston series, but since then he's played Collison extended minutes for the last two games. But, of course, he's still sticking with Perk throughout crunch time. And ... we'll see.

EVERYONE STOP YELLING. LeBron got 120 of 121 MVP votes, and he's won 4 of the past 5 MVPs. LeBron is properly appreciated, unanimous MVP or not.

Goodnight Clippers. At the very least, if Chris Paul stays in LA, they'd better get one extra big man and Stan Van Gundy. If he leaves LA? Well now, THEN things get fun.

Z-Bo. In basketball heaven, every single game ends with Z-Bo throwing his headband into the crowd and then dancing his way into the tunnel. God bless the Playoffs.

• Celtics head off into great unknown