How the Bulls executed down the stretch against the Heat

Share All sharing options for: How the Bulls executed down the stretch against the Heat

There were so many things stunning numbers in the Chicago Bulls' 93-86 win over the Miami Heat in Game 1 of their second-round playoff series, but the one that jumped out at me most was 35. Thirty-five as in 35 fourth-quarter points by the Bulls, despite missing Derrick Rose, Kirk Hinrich and Luol Deng and dealing with a stifling Heat defense that had slowed them at every turn.

Down the stretch, the Bulls were scoring at will. Chicago scored on eight of its last 10 possessions, and they did so without going to the standard "clear out and let the star go to work" strategy. Rather, the Bulls ran real offense and -- surprise, surprise -- got good shots out of those sets.

With a couple exceptions, the Bulls used one set on those late-game plays. It appeared to be a form of the Hawk offense, popularized by Hubie Brown and Flip Saunders. The set calls for the point guard go to one side, run a cutter through to a staggered double screen on the other side and set up a simultaneous side pick and roll with the point guard. Many different plays result from that setup, which is why many coaches use it in the NBA. The Bulls versions we saw down the stretch were more fragmented, and they didn't feature all the elements of the alignment, but they were legitimate sets that worked beautifully.

(Why Hawk? My theory: the Bulls didn't want to run conventional pick and rolls because the Heat's traps are so devastating. Hawk lends itself to guard/guard and guard/small forward pick and rolls, which are more difficult to pressure).

Let's take a look at a couple of them. First: the three by Marco Belinelli that initially tied the game at 76. As you see here, the Bulls sort of have two plays set up, a Hawk staple. On one side, Jimmy Butler is acting as a decoy screener for Nate Robinson. On the other, Joakim Noah and Taj Gibson are setting up a double stagger screen for Belinelli. 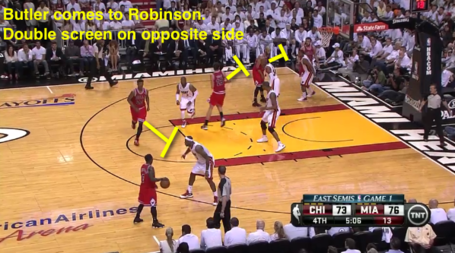 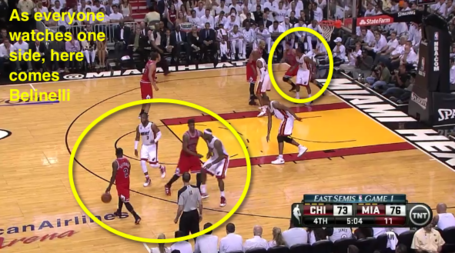 The Heat must be alert, because Butler can pop to the open right corner for a good look. That may explain why Mario Chalmers, guarding Belinelli, falls asleep, yielding this much of a head start on his curl. 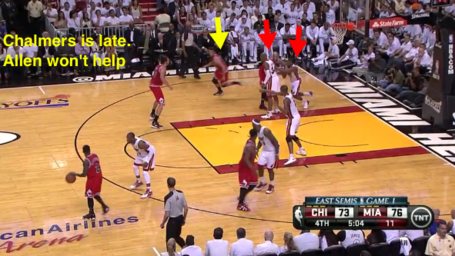 It's almost as if Chalmers expect Ray Allen to help in some capacity. Allen doesn't, and Belinelli uses the space to fire for the game-tying shot. 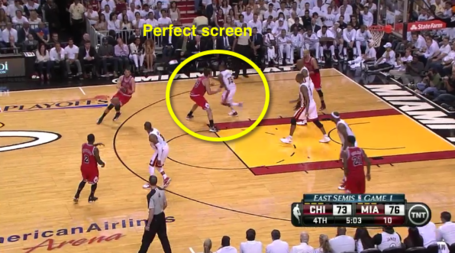 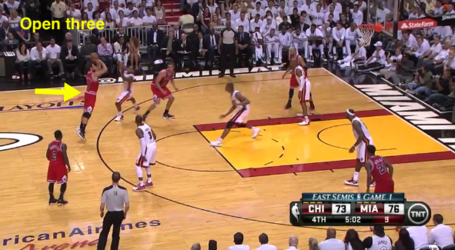 Here's another example of the same formation that doesn't yield a good look initially, but eventually pays dividends due to the spacing of the court. The Bulls begin in their same three-on-one-side/two-on-the-other alignment, but this time, Butler will complete the Hawk cut, curling to the double screen on the opposite side. Meanwhile, Belinelli starts as if he's coming to screen for Robinson. 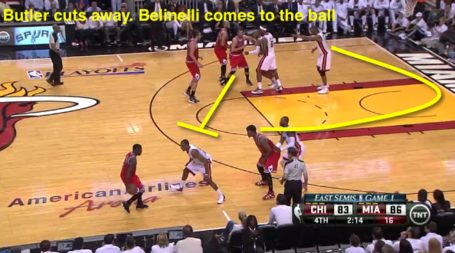 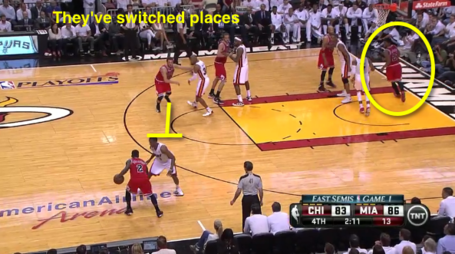 But Robinson does an interesting thing here. As he sees all this attention happening, he breaks the play, taking advantage of Miami looking away from him. One quick crossover and Robinson gets by his man into the open space in the right corner.

This doesn't initially work. Robinson gets swallowed up by Miami's defenders, and his only play is a pass back to Belinelli for a wild three. 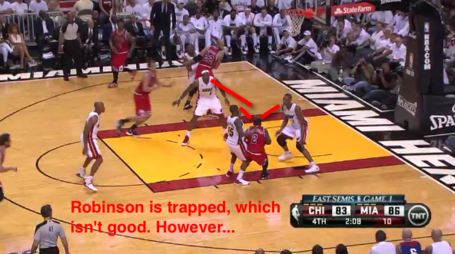 But there is a silver lining. The Heat's defenders have converged on Robinson, thereby leaving their initial assignments. In a weird way, Robinson's pass back to Belinelli helps, because it allows Noah and Gibson to carve out rebounding position. 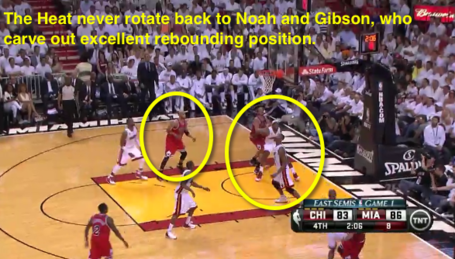 In this way, the Bulls have essentially set up a Kobe Assist, a term created by Grantland's Kirk Goldsberry to describe missed shots that end up in the hands of offensive rebounders. (Does this mean Robinson had a Hockey Kobe Assist? How deep down the rabbit hole do you want to go?). Robinson's freelancing didn't create an efficient shot, but it opened up offensive rebound opportunities because the other Heat players were dealing with the motion of the rest of the play.

Ultimately, Noah grabs the board, and the Bulls simply reverse the ball to Belinelli for the game-tying three. 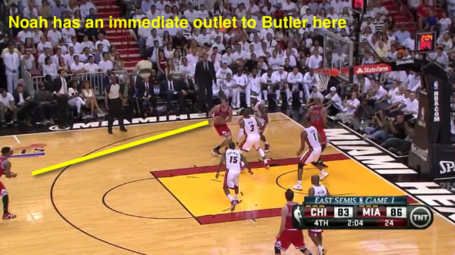 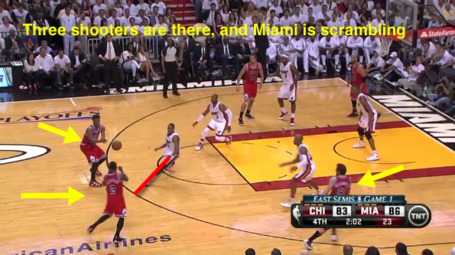 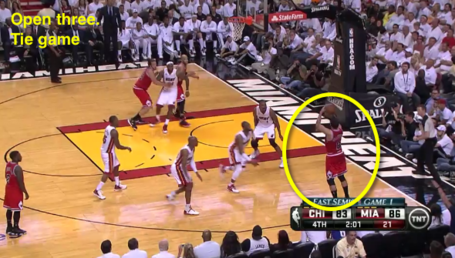 The eventual dagger -- the Robinson finger roll -- looked like a simple isolation, but a closer look reveals the Bulls ran the same set as the previous two plays. As you can see, the Bulls have again set themselves up in the same alignment. 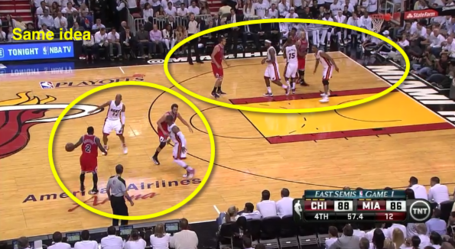 The benefit of having players in two opposite spots on the floor is that the defense can't tell which side is the decoy. In this case, it's the opposite side that proves to be the fake play.

Belinelli will pop to the corner, and Robinson will throw him a bounce pass. The Heat react by switching Dwyane Wade onto Belinelli and Allen onto Robinson. 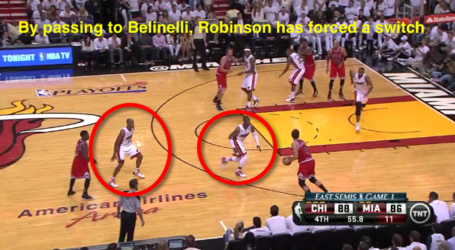 This isn't as good as leaving Belinelli wide open, but it's still beneficial for the Bulls. Allen cannot stay with Robinson off the dribble, so Belinelli throws the ball right back to his point guard. Noah initially comes to set a screen, but Robinson waives him off to go one-on-one. 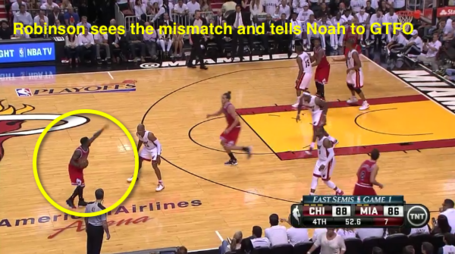 It's an ISO, sure, but it's an ISO on the Bulls' terms with a favorable matchup. Without all the motion to set this up, it would not have worked. Instead, Robinson gets left, Allen opens his stance and nobody helps, giving the Bulls the dagger. 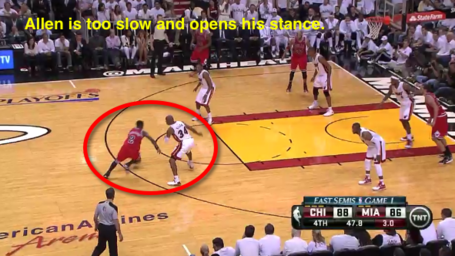 Three plays, all from the same alignment, all with different options, all with the same ending. The Bulls bucked the conventional wisdom that you need to "put the ball in your star's hands" and let him go to work. Maybe they didn't have a star to go to in the first place, but when you score on eight of 10 clutch possessions in the final six minutes against a defense as ferocious as the Heat's without Derrick Rose, Luol Deng and Kirk Hinrich, it sends a powerful message.

That message? Running actual plays -- any plays -- works late as well as any other time in the game as long as the staff and players are committed to the cause.

• Flannery: NBA playoffs are the stuff of dreams

• Spurs win in double-OT: How Manu got open

• Herbert: How Paul George evolved into a star