Luol Deng injury: Bulls forward not in Miami, out for Game 2

The All-Star small forward is still recovering from a spinal tap procedure he received last week and it's unclear when he'll be back in uniform.

Share All sharing options for: Luol Deng injury: Bulls forward not in Miami, out for Game 2

Luol Deng will not play in Game 2 of the Chicago Bulls' second-round series with the Miami Heat, according to a report from K.C. Johnson of the Chicago Tribune.

Deng has been in the hospital for most of the last week, missing Chicago's last three playoff games while dealing with complications from a spinal tap procedure he received. 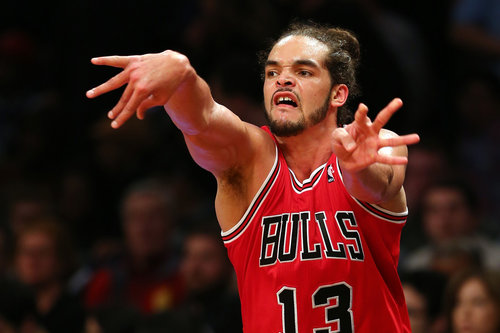 Tom Ziller on how Noah's unorthodox game has kept the Bulls afloat.

While the Bulls have gone 2-1 in his absence, including a stunning Game 1 victory over Miami, he was expected to be a huge part of their game plan in terms of matching up with LeBron James.

Without him in the lineup, Jimmy Butler and Marco Belinelli played 94 of a possible 96 minutes on the wings in Game 1.

• Flannery: NBA playoffs are the stuff of dreams

• Spurs win in double-OT: How Manu got open

• Herbert: How Paul George evolved into a star