Derrick Rose and the Bulls' history of letting players break themselves

The former MVP still isn't playing. The Bulls shouldn't be surprised after the way stars have been treated by the team.

Share All sharing options for: Derrick Rose and the Bulls' history of letting players break themselves

At its very core, the Derrick Rose saga comes down to this: doctors and Chicago Bulls officials have told him that playing at this point does not carry the potential for re-injury. He is healed, they say, despite the fact that he doesn't feel fully comfortable. He does not believe the doctors, or else he would be playing.

On one hand, most people believe doctors. On the other, most people have not had to deal with the Bulls' doctors.

Consider last season. As is often brought up, Rose played through a plethora of maladies. Every time, the team doctors cleared him to play. Every time, he got re-injured, or discomfort with one body part resulted in an injury to another body part. He was never comfortable in 2011-12, but he played, because the Bulls told him he could play. And on that fateful day in April 2012, he blew out his ACL. He faced up to a year of not being able to do that which he loves most: play basketball.

There's no guarantee that devastating injury was caused by playing long minutes through all of those other injuries. But in that situation, avoiding a mental link between the two must be difficult, maybe impossible. Faced with such disappointment, the Butterfly Effect takes over. Every aspect of the conditions is questioned. And blaming an injury on playing with other injuries is pretty widespread and natural.

Consider Rose's teammates. Luol Deng's had a run-in with Bulls doctors in the past. Back in 2009 -- Rose's rookie season -- the Bulls declared in February that one of Deng's injuries was shrug-worthy enough that the forward should "challenge himself physically" in treatment so he could get back on the court. The Bulls released a public statement to that effect and with those three words. The quote came from Bulls team doctor Brian Cole. It was widely seen as a P.R. volley designed to get Deng back on the court for a playoff push. TrueHoop's Henry Abbott captured the mood back then.

How the Bulls stunned Miami 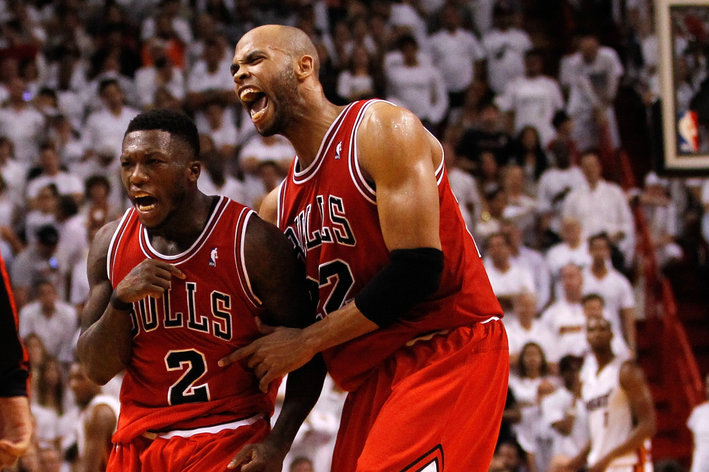 Deng didn't feel comfortable, so his agent arranged for an outside opinion. And suddenly that day-to-day injury the Bulls couldn't believe would keep Deng out of action turned into a stress fracture serious enough to require months of rest to heal. Deng didn't play again that season. He was eventually cleared for basketball activities in July. The Bulls said Deng wasn't really injured, and told him to play. A different doctor -- the correct doctor, in this case -- told Deng he was really injured, and that he shouldn't run, jump or cut on his leg for four months.

In Game 3 of the 2011 Eastern Conference Finals, Omer Asik broke his leg. We're not talking about a stress fracture here: he broke his leg. Somehow, he got cleared to play by team doctors in Game 4. He lasted two minutes. And didn't play again until December. Based on the coverage of that incident, Asik wanted to "tough it out." No one with an MD after their name stopped him.

And after all of that, you expect Rose to march off into battle? You expect Derrick Rose to trust what has appeared under the John Paxson regime to become one of the least trustworthy and most pushy NBA franchises when it comes to injury? You expect him to trust a coach in Tom Thibodeau who repeatedly runs his players into the ground by heaping huge minutes on them? Rose's specific situation is more nuanced -- there are a million factors. But we can't ignore that one blaring horn in the fog is the team doctor's history of wrongly encouraging an injured star to continue to play an injury that would get worse with activity.

Like clockwork, in the Bulls' first round series against the Nets, Kirk Hinrich -- who has been battling injuries (as many as eight of them) all season long -- played 60 minutes (60!) in a Game 4 win. He hasn't played since due to a calf injury. Would you trust this employer with your health? I find it hard to blame Rose for doubting the team given the Bulls' history. Again, it's all more nuanced than this. Rose is practicing, reportedly well. His public statements are cryptic. One assumes he has had other doctors check him out, and there have been no reports that outside opinions disagree with the Bulls' medical staff.

But for me, so long as the framing of the saga is that Rose won't play despite being healthy, the single factor that sticks out most is how reluctant we and Rose himself should be to believe a single word the Bulls' doctors say about who is healthy and who is not. The track record speaks for itself.