NBA Draft 2013: Why Alex Len is a better prospect than Nerlens Noel

Nerlens Noel is seen as the likely No. 1 pick in the 2013 NBA Draft, while people view Alex Len with more skepticism. But is that justified? Jonathan Tjarks suggests that Len is actually the better prospect.

Share All sharing options for: NBA Draft 2013: Why Alex Len is a better prospect than Nerlens Noel

There's a notable lack of hype surrounding the 2013 lottery, especially in comparison to 2012 -- when Anthony Davis was the grand prize -- and 2014, where teams are already daydreaming about Andrew Wiggins. The 2013 draft class, in contrast, doesn't have nearly as much star power. Nerlens Noel is getting the most buzz for the No. 1-overall pick and he may not even play next season while he recovers from an ACL injury.

Noel is an intriguing prospect, but in my opinion, he's not even the best center, much less the best player, available in this year's draft. Maryland sophomore Alex Len is bigger and more skilled than Noel.

Len (7'1, 255 pounds) will be one of the biggest centers in the NBA, while Noel (6'10, 230 pounds) will be one of the smallest. There's no position in the NBA where size is more important than center, since they spend so much time locked in wrestling matches for position in the paint. At least initially, Noel will have a difficult time dealing with the size of guys like Marc Gasol (7'1, 265 pounds), Roy Hibbert (7'2, 280 pounds) and Dwight Howard (6'11, 265 pounds). Even someone like Chris Kaman (7'0, 265 pounds) will be able to bulldoze him on the block fairly easily.

Noel's relatively narrow shoulders and slight build should really worry NBA teams. Len put on nearly 40 pounds of muscle between his freshman and sophomore seasons of college, but Noel's frame probably can't support that type of weight gain. In that respect, he's similar to Davis, his predecessor at Kentucky, who came into the league at 6'11 and 220 pounds. As a result, he rarely played the center position for the Hornets, who brought in Robin Lopez (7'0, 255 pounds) to handle most of the banging down low. Instead, Davis transitioned to power forward, playing on the perimeter far more than he did in college. 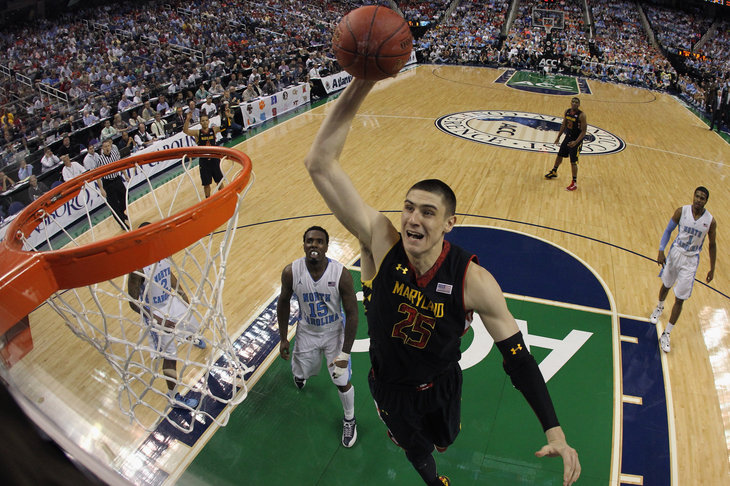 The difference is that Noel doesn't have the skill-set to play too far from the basket. Davis, a 6'3 high-school guard before an extremely late growth spurt, is the more fluid athlete. Just as importantly, he has more touch on his jumper. You can see that in their free throw percentages in college. While Davis shot 71 percent, an impressive number for a big man, Noel was at 53 percent, which verges on Hack-A-Shaq territory. Davis's outside shot is still developing, but he's at least a threat outside of the paint. Noel, in contrast, doesn't have to be defended when he ventures more than five feet from the rim.

Len is far more advanced offensively than Noel. Noel is fairly mechanical on the low block and wasn't much of a post-up threat in college. It takes size and skill to score with your back to the basket; at the NBA level, Noel will be lacking in both. Len is far from a finished product, but he's got a much better feel for playing with his back to the basket. At his size, all he needs to be a consistent post threat is a drop step and a face-up jumper, things he showed flashes of this season. Shooting 69 percent from the free throw line as a sophomore indicates the form is there.

Len's combination of skill and athleticism at his size makes him one of the more intriguing two-way center prospects in recent memory. Athletically, he compares favorably to Jonas Valanciunas, who's coming off an impressive, if inconsistent, rookie season for the Raptors. As a 21-year-old, Valanciunas, who isn't as skilled as Len, had per-36-minute averages of 13.5 points, 9.0 rebounds and 1.9 blocks a game. That type of size and athleticism translates immediately to the next level. At the very least, like Valanciunas, Len will be a catch-and-finish threat around the rim as a rookie.

Defensively, neither Noel nor Len will have much of an impact for a few seasons. It's almost impossible for a young big man to be a plus player on that end of the floor. There's no way for a 19- or 20-year-old in the NCAA to prepare for the physical demands of protecting the NBA paint, much less the mental ones. Centers are the last line of a defense; they have to be able to diagnose what the offense is trying to do and anticipate the correct play, something which takes years to develop. Marc Gasol won the Defensive Player of the Year Award at 28; Larry Sanders didn't consistently earn playing time until he was 24.

Noel is one of the best shot-blockers in recent memory, but Len is no slouch in that department, either. While he's not as explosive and doesn't play above the rim as much as Noel, he averaged 2.1 blocks a game and was on the All-ACC defensive team as a sophomore. Noel, who had 4.4 blocks and 2.1 steals a game as a freshman, has more upside as a rim protector and in terms of defending the pick-and-roll. Len doesn't have the footspeed to defend 20-plus feet away from the basket, but he won't really need to at the next level, as most NBA defenses try to keep their centers in the paint.

If the guards can't control the pace of the game or stretch the floor, there's very little a center can do on offense.

The biggest criticism of Len comes from his relative lack of production at Maryland. However, it's not all that surprising when you take a closer look at the Terps' roster. Len's two years at College Park coincided with Mark Turgeon's first two seasons as a coach, so the program was in flux for most of his time there. This season, none of Maryland's guards were good decision-makers or shooters. The Terrapins didn't have a legitimate point guard and they shot 34 percent from the college three-point line.

Kentucky, meanwhile, was hardly guaranteed an NCAA Tournament berth when Noel went down with an ACL injury. The Wildcats would have had the same problems even if Noel had stayed healthy: no point guard, no consistent outside shooting and no back-to-the-basket threat. They only won one game against an NCAA Tournament team -- at Ole Miss -- with him in the lineup. Would he still be considered a No. 1 overall pick if he had stayed healthy and they had played in the NIT? Neither Noel nor Len was in a situation where they could push their team over the top, something obscured by Noel's absence in the final month of the season.

All that said, Noel is still an impressive prospect. He's a lottery talent with a rare combination of length (7'4 wingspan), athleticism and motor. At the very least, he will have a long and effective career as a rebounding and shot-blocking specialist. And with the NBA moving away from back-to-the-basket play, his lack of bulk might not be that big of an issue as his career progresses. Noel's ceiling is probably somewhere near Sanders, whose turned himself into an elite interior defender at 6'11 and 235 pounds. The difference is that Len's ceiling, as a two-way 7'1 250-plus-pound center, is closer to Gasol and a healthy Andrew Bogut.

Of course, the great known unknown for both is their medical history. Neither Len nor Noel will be able to participate in pre-draft workouts or summer league. Noel will be out at least 9-12 months while he recovers from ACL surgery, and Len will be out 4-6 months with a stress fracture in his ankle. Considering how many centers taken in the top five have struggled to stay healthy, those are massive red flags for any NBA team. I'm not a doctor, so I have no way of knowing which one will be healthier over the next decade. That could very well determine who becomes the better player.

Len has a higher ceiling and a higher floor.

But strictly in terms of on-court potential, Len has a higher ceiling and a higher floor. If he stops developing, a reasonably-athletic 7'1, 250-pound center that can play with his back to the basket will still have a ton of value. In contrast, if Noel can't add more bulk or develop a more well-rounded offensive game, he could top out as Chris Anderson.

Ignore the pre-draft hype, which won't matter much three years from now. How differently would the two be viewed if Noel had played with knuckleheads in relative anonymity at Maryland and Len had played with future first-round picks in the national spotlight at Kentucky?