The comparisons to Michael Jordan are quantitative only, and the Magic Johnson/Oscar Robertson theories are superficial. LeBron is really an updated Larry Legend.

As we learn more about LeBron James with every pressure-ridden postseason game he plays, more and more comparisons get made. There's the perpetual measuring stick of Jordan, the similarities in skill to Magic and the outrageous numbers that resemble those of Oscar Robertson.

But really, time is proving that the only sane comparison LeBron deserves is that of Larry Bird.

LeBron gets compared to guards because he's such a great passer -- he had two skip passes in Game 2 (one to Ray Allen, one to Mike Miller) that most NBA point guards would have trouble making. And James is 6'8 and 250 pounds. But fans forget what an incredible and willing passer Bird was. He averaged better than six assists per game for his career and 6.5 in the playoffs. LeBron's assist numbers are somewhat better, but close.

Bird and LeBron are also incredible rebounders at small forward; Bird was better on this count, but not by a whole lot. Of course, they are great scorers: Bird averaged 24 points per game in 164 playoff games, and LeBron is averaging 28. While Bird is known more as a shooter than James, they are roughly equivalents in terms of efficiency -- LeBron's foul-drawing ability makes up for his deep shooting, though that deep shooting has gotten much better. (He's at a career-high 37 percent this postseason after a career-high 40 percent in the regular season.) And of course both are willing, skilled, passionate defenders.

How that just happened 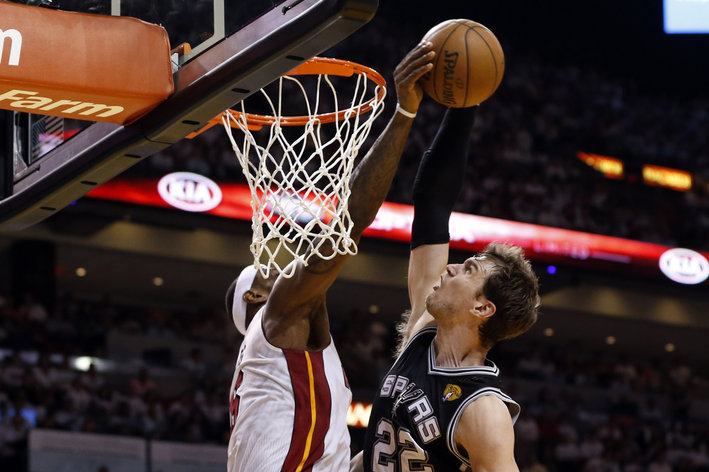 Mike Prada breaks down The Block frame by frame.

The difference in style is owed to LeBron's superior athleticism and the vogue of the time. While post play is continuously romanticized these days, it's used less frequently by all players and frankly isn't as effective as the pick-and-roll or perimeter-initiated play. That wasn't the case in Bird's heyday, when there were fewer shooters and getting low was the most surefire way to score. Bird's post game is vastly superior to what we see from LeBron, but James' dribble-drive skills far outstrip what Bird could do from 25 feet with a live ball.

But the contours are all there. LeBron is showing us what a Bird-like figure looks like in today's NBA. He allows smallball configurations, he can relieve any teammate of defensive responsibility, he can fill in gaps on the boards and defending the rim (hi Tiago!), he can be your best passer out of the small forward spot, he can run the offense and he can move off the ball. He can get you 30 points if you need it. Or 15 rebounds. Or 10 assists. Or all of the above. Just like Bird.

This is not a quantitative judgment: the argument that LeBron is or is not, will or will not be as great as the greatest stars in our nostagliaphiliac memories is pretty tiresome, all told. More interesting (to me, at least) is in finding common threads among the players. But if you insist on including Jordan, Magic and LeBron into one sentence, try this: LeBron is like a newfangled Bird with the scoring of Jordan and the passing pizzazz and versatility of Magic. Cool?

• Flannery: LeBron, Heat reach level no one else can

• Rockets chasing both Dwight and CP3