Game 3 of the NBA Finals is not particularly magical

Please, stop it with the trivia posing as analysis.

Share All sharing options for: Game 3 of the NBA Finals is not particularly magical

HAVE YOU HEARD? In 12 NBA Finals series that have gone 1-1 during the 2-3-2 era, the winner of Game 3 has won the series 11 times?! Fascinating. And of those 11 winners, eight did not have home court advantage for the series. How incredible.

1. In a seven-game series, spotting a team two wins is a BIG deal. Here's what the stat cited above says: teams that win two out of the first three games in a best-of-seven series usually win. AMAZING INSIGHT. You win two games in three and need to just split the remaining four to win the series, and you get a major advantage in the series. Groundbreaking stuff. Guess what: teams that win the first two games of a series and lose the third also win series at any extraordinary rate. 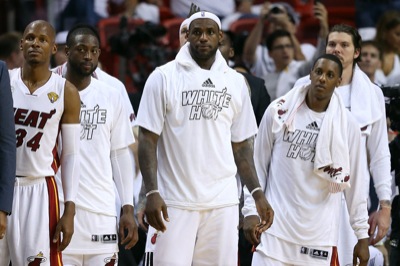 A team has won the first two games in a Finals series and lost the third 10 times since the 2-3-2 format became permanent in 1985. The team that lost Game 3 won the championship nine times. Game 3 is not magical.

2. The team that goes 2-1 in the first three games of the Finals is probably a better team, especially if two of the games are on the road (as was the case for eight of the series cited). Winning a three-game series is probably a good indicator of superiority. But it's just that -- an indicator.

3. So, the team that takes a 2-1 lead usually wins the series. Let's take two equally matched teams and pit them against each other in a best-of-seven series that begins 2-1. Team A is up 2-1. Team B is down 1-2. What is the probability, based on a 60 percent home court advantage with each team getting two home games, that Team A wins the series? It's just about 70 percent. Again, spotting a team a 2-1 lead with an even home-road split remaining is a nice darned advantage.

Any "magic" happening with the 11 of 12 stat is likely a combination of that probability (also known as "winning two out of four is easier than winning three out of four"), the point from Bullet No. 2 about indicators of team superiority and noise from an absurdly small sample size.

In conclusion, stats like the one mentioned at the top are trivia, not rules of basketball law. Adhere to them at your own peril.

• Flannery: LeBron, Heat reach level no one else can

• Rockets chasing both Dwight and CP3