Why did LeBron James struggle so badly in Game 3 of the 2013 NBA Finals? Credit an air-tight San Antonio Spurs scheme that caused LeBron to think instead of act.

Basketball is a game of instinct, developed by mundane repetition of both team and individual drills. It moves so quickly that you rarely have time to stop and actually consider your options. You have to turn those options into routine, much like how a normal human being rolls out of bed and automatically goes into the shower.

When a player is thinking on the court, he's already lost. That pretty much explains LeBron James' disastrous Game 3.

More: Flannery on Spurs' Not Big Three Pounding the Rock on Game 3

The Spurs have defended James by daring him to do what he doesn't want to do on every single possession: shoot from the perimeter. San Antonio knows that James has improved his perimeter shot significantly since he entered the league, and they don't care. It's not always about a player's shooting percentage, it's how much they make themselves into a threat by shooting confidently. James has often been a reluctant perimeter shooter since coming to Miami, choosing instead to enforce his will around the basket. He's heard all those who wondered why he settled for so many jumpers in Cleveland given his size and adjusted his game accordingly.

Now, the Spurs, much like the Mavericks in 2011, have flipped the script on its head.

San Antonio's scheme is disarming. It's not unusual for teams to give James space at the top of the key, but the Spurs are taking it to an extreme, basically daring him to shoot jumpers. Look at the space James is being given in these screenshots. 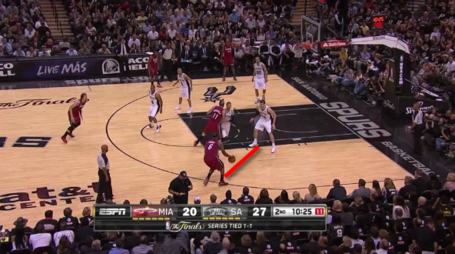 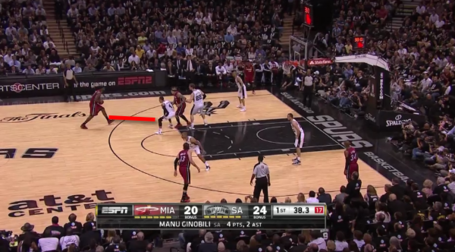 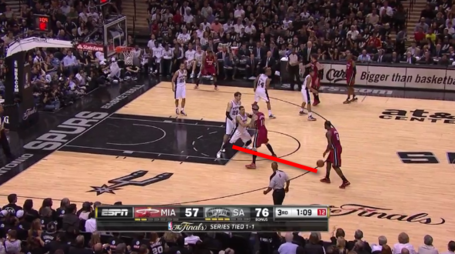 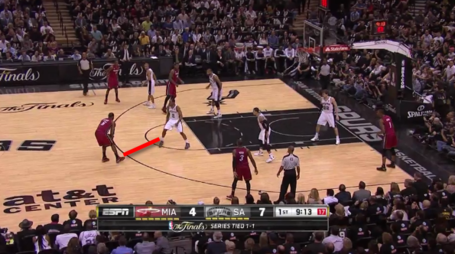 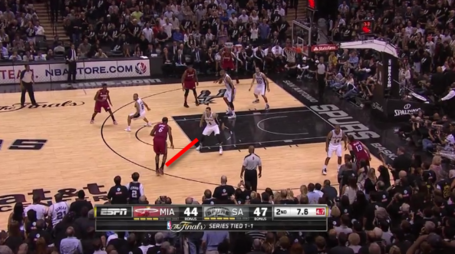 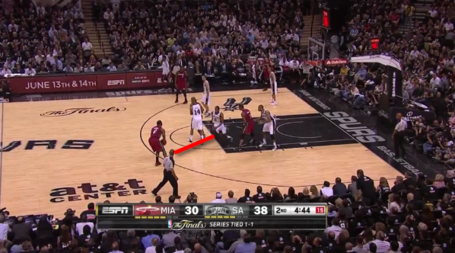 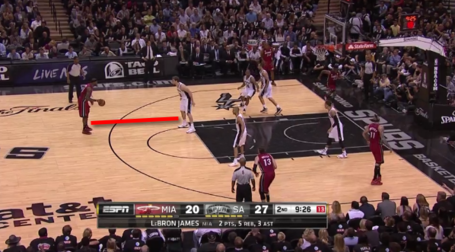 James attempted jumpers on a couple of these, but for the most part, he either hesitated or drove. When he drove, the Spurs converge, sending everyone to the rim to get as many arms around the ball as possible. The fact that they are so far off James already means they have less ground to travel to beat James to the spot. Look at how many arms are in the picture here. 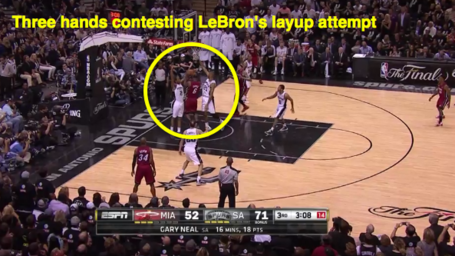 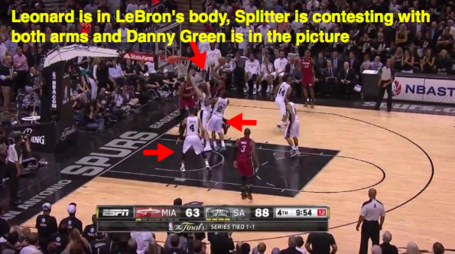 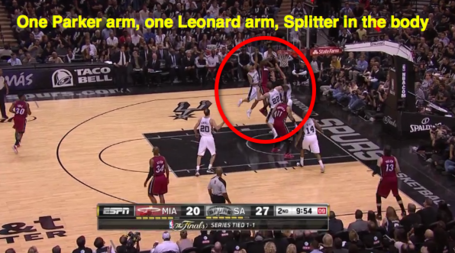 Or, most strikingly, here. It's a miracle James was even able to see well enough to get the layup attempt toward the basket. 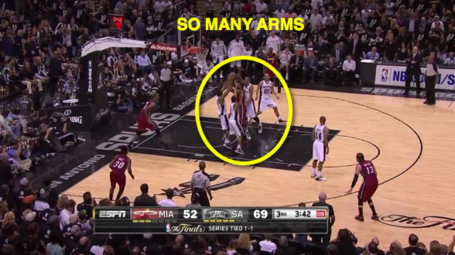 The Heat countered by sending James to the low post, particularly in the second quarter, but it didn't work out as planned. James only occasionally got deep post position, and when he did, the Spurs converged. The second of the previous three screenshots, as well as the video, came when James pinned his primary defender just outside the lane with deep post position, showing that San Antonio's help defenders were sometimes just too good. Save for that possession, you saw James go to work outside the block a lot, and San Antonio responded by laying off him again. 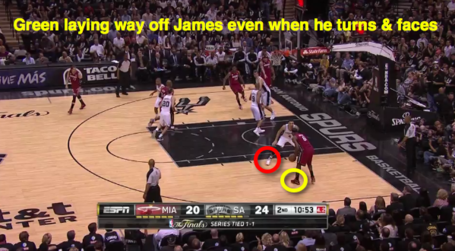 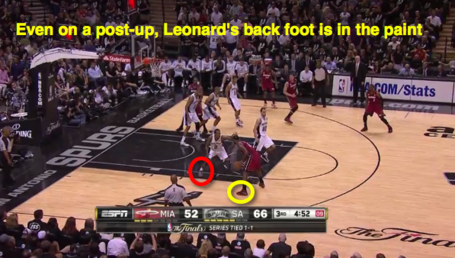 The second screenshot also displays the preventative measures the Spurs' defense is taking. Kawhi Leonard, James' primary defender, has two feet in the paint to cut off any drive. Manu Ginobili has cheated off Dwyane Wade and is plugging a potential James drive to the middle, while Tim Duncan is lurking to stop James at the rim should he drive left. At this exact moment, there's nowhere for James to go. His only choice is to fire a mid-range jumper that misses.

Seeing this scheme over and over again is having a dizzying effect on James. Every time he catches the ball, he's asking himself the same question. Should I just take this shot, or is this what they want me to do? Should I drive like everyone says I should, or shoot confidently like everyone says I should? It's as if the Spurs are the parent that gives their kid a "choice" to do something they shouldn't, only they must "live with the consequences" of the choice. The kid gets nervous about rebelling and ends up doing what the parent wants anyway. (Maybe this just happened to me).

Look how tentatively James attacks this big-man switch with the slower Tiago Splitter on him.

A perimeter player against a big man isn't as much of an advantage as one might think (see this post explaining why), but James still has to make a more decisive move than that. At least take the jumper if Splitter won't yield ground.

Here's a similar situation where James wastes dribbles surveying against Tim Duncan, allowing Leonard to cheat off his man and position himself to cut off a potential baseline drive.

And here's the full video of the second post-up screenshot, which shows James holding the ball at the elbow and allowing the Spurs to set up their funneling traps rather than attacking quicker.

We also saw some examples of the opposite problem: James forcing a drive that isn't there in a misguided attempt to "be aggressive." One example of this: his cringe-worthy turnover in transition late in the third quarter. The Spurs have all of James' driving lanes closed here. 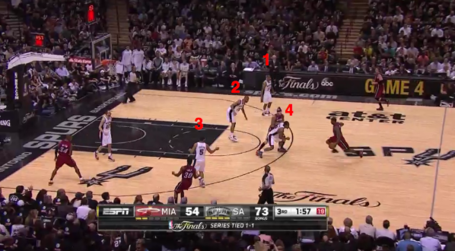 And yet, James still tried to do this.

The odd thing about the Spurs' strategy is that it shouldn't work in 2013. James shot 48 percent from 20-24 feet this season, according to NBA.com's stats page. That's an elite figure. The Spurs' decision to gift James that shot runs in defiance of those numbers.

The odd thing about the Spurs' strategy is that it shouldn't work in 2013.

But the Spurs aren't playing James based on his percentages; they're playing him based on his tendencies. There's an important distinction between the two. The Spurs know that James prefers to take his time and survey the floor whenever possible. They know that James can be a reluctant shooter that instead prefers to use his strength to drive and his vision to find players as he attacks. Within all that, sure, James will occasionally rise and fire effectively, but it's in situations where he feels comfortable with how he's being covered. By playing several feet off him, the Spurs are putting James' brain in an unfamiliar situation that is causing him to hesitate

It's an approach fueled, ironically, by gut feel, not analytics. It's also one that deserves way more credit than it'll probably get for slowing James down.

To counter it, James may have to play more off gut feel himself. San Antonio's approach is too sound to commit to a single strategy, but every so often, it wouldn't hurt to fire up those 20-footers in rhythm rather than dribbling around and then taking those shots when nothing else presents itself. Once in a while, it wouldn't hurt to attack the defense before it gets set rather than waiting to discover the lanes to exploit.

This is not usually in James' nature, but Game 6 of last year's Eastern Conference Finals shows he's capable of changing his mentality. He will need to do that again in Game 4 to expose the holes in San Antonio's air-tight schemes.

• Ziller: LeBron is the evolutionary Bird

• Julius Erving and the loss of innocence.