SAN ANTONIO -- You need two things to make it in the NBA: talent and opportunity. The former often gives way to the latter, but in the case of Gary Neal and Danny Green, it took the right set of circumstances to allow their talent to flourish.

The 28-year-old Neal was, and still is, a basketball vagabond. His career has taken him from Turkey to Spain and Italy before getting a chance with the Spurs. He's existed for three seasons on nonguaranteed contracts and when the Finals are over he'll be a free agent.

Green had a slightly better pedigree as a McDonald's All-American and a four-year player at North Carolina, but his path was anything but secure. A second-round pick by Cleveland in 2009, he played a grand total of 207 minutes his first two seasons in the league and was cut twice by the Spurs before finally earning a rotation spot last season.

If they were anonymous to the public at large before the Finals began, they aren't anymore after they torched the Heat in Game 3, combining for 51 points in a 113-77 victory. This was the night of the role player and Green made 7-of-9 threes one game after making all five back in Miami. Neal hit six of 10 from behind the arc.

Spurs coach Gregg Popovich called Neal a professional and one assumes that's the largest compliment he can pay anyone. He credited Roy Williams, Green's coach at Carolina, with helping instill the confidence to help Green succeed at this level.

"He talked to Danny about being confident and about going after a job like he really wanted it," Popovich said. "Not to be in float, but just to go after it. Take no prisoners, so to speak. Act like somebody is trying to something away from you."

"It's been a while since I shot the ball like that. When I saw daylight I just let it fly." -Danny Green

It's hard to think of Green as lacking confidence these days. He carries himself with the self-assuredness of someone who knows his job and knows how to play it. When he came out for his post-game press conference, he sized up the media contingent and smiled, "S'up?"

"I feel like everybody on this team has a story," Green said. "Pop and R.C. (Buford) obviously do a great job of finding guys in weird places."

Weird, like outscoring LeBron James through three games of the Finals and coming with a made three of tying the all-time record. "It's been a while since I shot the ball like that," he said. "When I saw daylight I just let it fly."

Neal has no problem letting it fly. He got up 17 shots in 25 minutes and if he hesitated it was only for a second. Scoring is what got him here and scoring is what will keep him around.

How many guys around the far-flung world of pro basketball watched this game and thought, why not me? Whether it's in the D-League or overseas, there are hundreds of players with the talent to be NBA players, but the opportunity, for whatever reason, never came. Or, when it did, they weren't ready to seize the moment.

"You know, it's just an individual thing," Popopvich said. "Some guys are affected by the lights and some guys aren't."

He was talking about Kawhi Leonard, the third in the Spurs trio of role players who came up huge in Game 3. Leonard had a more direct path as a first-round pick, but it's not like anything was handed to him either. Underscouted and unloved out of high school, Leonard made himself into a first rounder at San Diego State and then transformed himself again into the perfect Spurs role player. 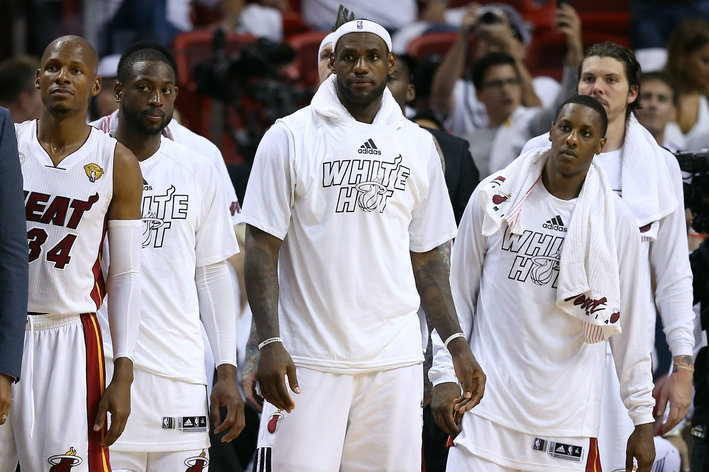 LeBron is less comparable to Magic or Jordan than he is Larry Legend, writes Tom Ziller.

His defense on LeBron James has been fantastic. Pop's scheme has been to pack the paint and make James beat them from the outside. For the sake of simplicity it's the Rondo defense, but there's a lot more going on behind the first wave of defense. There's always a big man to help and the Spurs are executing the plan with discipline and patience.

Even still, someone has to be the primary defender and Leonard has been tremendous. He's kept himself between James and the basket and dared him to shoot. For all the accolades Paul George received in the conference finals, Leonard has been even better, not that he's inclined to give himself the spotlight.

The Spurs have been careful not to rock that boat, but Green did allow that LeBron has beaten himself saying, "We know that he's not at his best right now. He missed a lot of shots he normally makes. We're sure Game 4 he's going to come out a lot different. But LeBron is not just us stopping him. He's kind of stopping himself out there and we're getting a little lucky."

That's about as close as anyone has come to providing the fabled bulletin board material in this series and even that was incredibly benign. Words won't get James untracked. Outside of a few brief flashes, he hasn't nearly played up to his standards. Something isn't right.

"Honestly, I just have to play better," James said after scoring just 15 points on 21 shots. "I can't have a performance like tonight and expect to win."

This isn't about LeBron being passive or tentative. It's not about whatever demons people think exist in his head or the pressure of the moment. He's getting squeezed by a combination of a fantastic gameplan and tremendous execution and for the first time in over a year, he looks frustrated and vulnerable.

"We haven't stopped anybody," Popovich snapped. "We're trying to play good team defense on everybody."

But they are and the Heat are in trouble. They only have to take one game here in this amped up city to send the series back home, and if we've learned anything it's that momentum is a fairy tale, but once again the pressure is squarely back on their shoulders.

He does have to do more because he can't rely on Dwyane Wade or Chris Bosh to save them. Mike Miller has done his part and so has Ray Allen. But if James isn't great, the Heat haven't proven that they can win.

"We got what we deserved," Heat coach Erik Spoelstra said over and over again and he wasn't talking about the 77 points his team scored. San Antonio shredded the vaunted Heat defense without, it must be said, anything close to a great game from Tony Parker, Tim Duncan or Manu Ginobli.

"I don't even want our guys bringing up that side of the floor," Spoelstra said, regarding the anemic offense. "If that's what we're going to pinpoint, we're kidding ourselves. We really are."

After three games, we've had one classic and two blowouts. This series still hasn't fully taken shape and now we have the added intrigue of a potentially devastating injury to Tony Parker who will have an MRI on his hamstring on Wednesday, casting doubt about his availability for Game 4.

All along we thought the Spurs couldn't win when Parker wasn't at his best and they proved us wrong in Game 3. They're good at defying conventional wisdom. Just look at the players on the roster who defy convention themselves.

"Let it fly," Pop told his team during a timeout. "Get your name in the paper."

The Spurs are so freaking old school, but at the same time, they simply refuse to look at things the way the rest of us do. That's how they wound up with players like Green and Neal and that's why they're suddenly ahead in this series.

• Ziller: LeBron is the evolutionary Bird

• Julius Erving and the loss of innocence.