While Miami's big three combined for 85 points in Game 4, it was their commitment to the aggressive defensive identity they built through the season that evened the series.

The Miami Heat evened up their series with the San Antonio Spurs with a spectacular defensive performance in Game 4. Miami scored 23 points off of the 18 turnovers they forced Thursday night in a 109-93 victory. The Heat were committed to their aggressive defensive identity and rattled the Spurs' offensive execution.

"We try to play aggressively," Erik Spoelstra said after the game, "but it's a fine line with that team. They're the best passing team in the league. We have to be committed, wholeheartedly, to our identity which is to be aggressive. If we're not connected five-man they'll embarrass [us]."

Tony Parker scored all 15 of his points in the first half of the game. When discussing the key for Miami, he echoed Spoelstra's statement. "They played great defense tonight. They take a lot of risks -- that's Miami's identity. They play very aggressive defense ... they gamble. Tonight it worked. They made a lot of recovery blocks. We moved the ball but they did a good job tonight. "

Dwyane Wade accounted for six of Miami's steals as he attacked the Spurs' passing lanes and stripped the ball when the Spurs went into the paint. His steal in the fourth quarter at the 8:17 mark that turned into a fastbreak dunk served as a reflection of his dominant Game 4 performance. As LeBron James said, "That man was amazing. He was 06 'Flash' tonight and we needed every bit of it."

Miami's defensive pressure on the perimeter wouldn't have been possible without Chris Bosh's excellent work under the rim as he anchored Miami's defense. San Antonio shot only 50 percent around the rim in large part because of Bosh's defensive movement as he protected the paint: 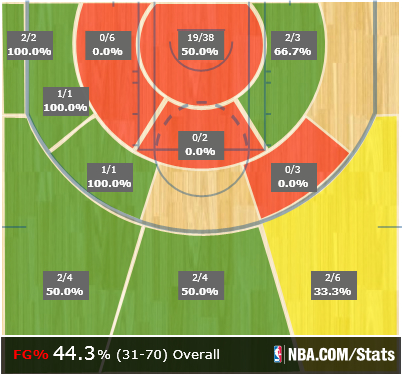 When asked what being the only big man on the floor on defense forced him to do, Bosh joked it forced him "to work." He went into further detail though, discussing the difficulty of covering Tim Duncan and the Spurs two-man game, stating, "Not only do you have to do your job on the defensive end by sliding your feet on the pick and roll coverage, you have to get back."

Bosh's concerted effort to get back proved to be crucial as Miami's perimeter defense relied on him to be the last line of defense. He also had a game-high 13 rebounds. Miami's defense contained the Spurs' offense and limited their second-chance opportunities by holding San Antonio to only five offensive rebounds after giving up 19 in Game 3.

Spoelstra spoke highly of Bosh's effort in Game 4, noting how the team needs him to take on multiple roles on offense and defense while still needing to rebound the ball. "[Bosh] helping us clean up the glass really gave us a boost."

Wade, Bosh and James combined for 85 points and their offense will surely be discussed, but what was the biggest change for them as a team from Game 3?

"The biggest change for us was on the defensive end." Wade revealed. "We came out with more pressure and were more active. That was the biggest thing in the game that we needed to change."

• Deron Williams: "It's a risk" | Kidd in rare company

• Flannery: All eyes on LeBron James